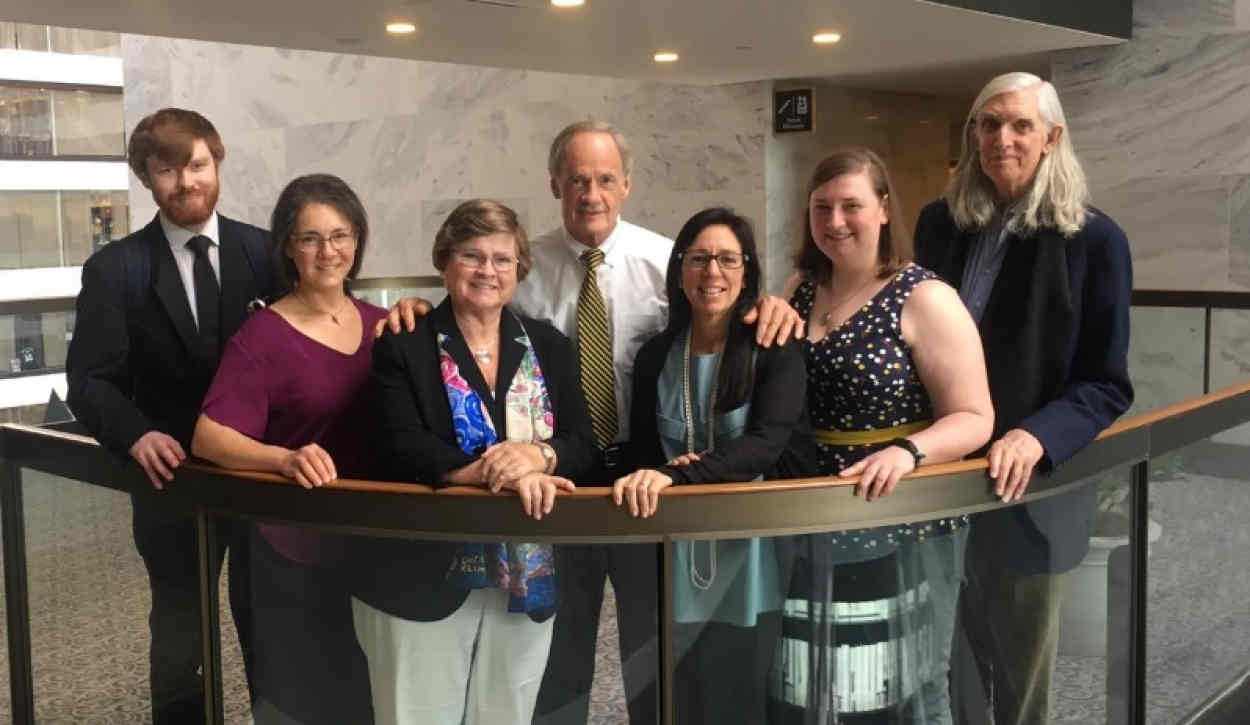 Members of the Democrats Abroad's Taxation Task Force during their recent visit to Washington, D.C. Carmelan Polce is third from the right.

The Democrats Abroad, the official organization of the Democratic Party for American citizens living permanently or temporarily outside of the U.S., has reported that it is in discussions with Virginia Rep. Don Beyer on a range of issues, including residence-based taxation (RBT).

News of the talks came in the wake of a “door knock” earlier this month in Washington, led by the Democrats Abroad’s taxation task force chairperson Carmelan Polce.

Rep. Beyer is a member of the House Ways & Means Committee, which is considered an advantage in terms of his ability to bring about changes in such areas as the way Americans abroad are taxed.

It also could be significant, observers said, because he might be willing to co-sponsor a pro-expat bill being proposed by North Carolina Rep. George Holding, a Republican.

As reported, Holding submitted his Tax Fairness for Americans Abroad Act in the final hours of last year’s legislative session, and is now openly seeking a Democrat “on the Ways & Means Committee” to co-sponsor it before introducing it into this year’s session.

In an update to her regular “Taxation Task Force Blog” on the Democrats Abroad’s website, Polce noted that although Rep. Beyer had been “called away to a briefing” at the last minute and wasn’t able to attend a meeting that members of the DA Task Force – who are voters from his district – had arranged, these “Beyer constituents” nevertheless managed to have “a productive exchange with [the Congressman’s legislative director”.

In doing so, Polce went on, they discovered that Beyer’s team had already scheduled a meeting about RBT with the Ways and Means Committee’s legislative counsel, ahead of another planned meeting, with Rep. George Holding’s team, “about our keynote reform”.

“We, in collaboration with the other organizations advocating for expat tax reform, have made the progress we were hoping for, i.e., bringing the Beyer team into active engagement with the Holding team on the development of RBT legislation,” Polce writes in her blog, headlined "A Step Forward on the Road to Residency-based Taxation."

“The DA Taxation Task Force, in collaboration with our colleague organizations representing Americans abroad, will continue our work with the Beyer and Holding teams on this important reform.”

Polce said that she and her fellow DA Taxation Task Force colleagues now expect the Beyer and Holding teams to work together to draw up “a consensus view on draft RBT legislation” and to forward this to the Joint Committee on Taxation to be “scored” – a legislative term for the painstaking writing of new laws that ensures they do what they’re intended to – as well as to the Ways & Means Committee’s legislative counsel, to be structured into a bill that “we can then build support for right across both parties and both chambers.”

“Of course, nothing related to Congressional lawmaking is as simple or as linear as that,” Polce continues, in her blog.

“There will be zig zags, delays and pitfalls along the way, but there are many groups advocating actively for progress on RBT, and working hard to keep the process moving forward.”

Polce ends her blog by telling her expat readers that the “best thing” they can do to progress the RBT cause would be for them to “reach out to your elected representatives to remind them of the importance of this reform to you and your family, and to ask for their support.”

At issue for both the Democrats Abroad, Rep. Holding and many others involved in campaigning on behalf of American expatriates is the U.S.'s current system of taxing its citizens on the basis of their citizenship rather than where they live ("residence"), which is unlike any other country except Eritrea. This "CBT" regime, as it's called, has been deeply problematic for Americans resident overseas ever since the U.S. introduced its so-called Foreign Account Tax Compliance Act in 2010, which forced foreign financial institutions to report to the U.S. authorities on any accounts they held on behalf of American citizens.

Prior to this, Americans living abroad often didn't realize they were expected to file a tax return every year to the U.S., and potentially owe U.S. taxes on any of their income that, for example, wasn't taxed by the country in which they were resident, and possibly also a citizen.

As reported, a U.S. Government Accountability Office report published in April detailed "data quality and management issues" that it said had "limited the effectiveness of the Internal Revenue Service's efforts to improve taxpayer compliance using foreign financial asset data collected under FATCA," and which it noted had also contributed to a "nearly 178%" increase in the rate of citizenship renunciations between 2011 and 2016.

To read a report on the Democrats Abroad’s taxation task force’s meeting in Washington, which took place for three days beginning on May 14, click here.