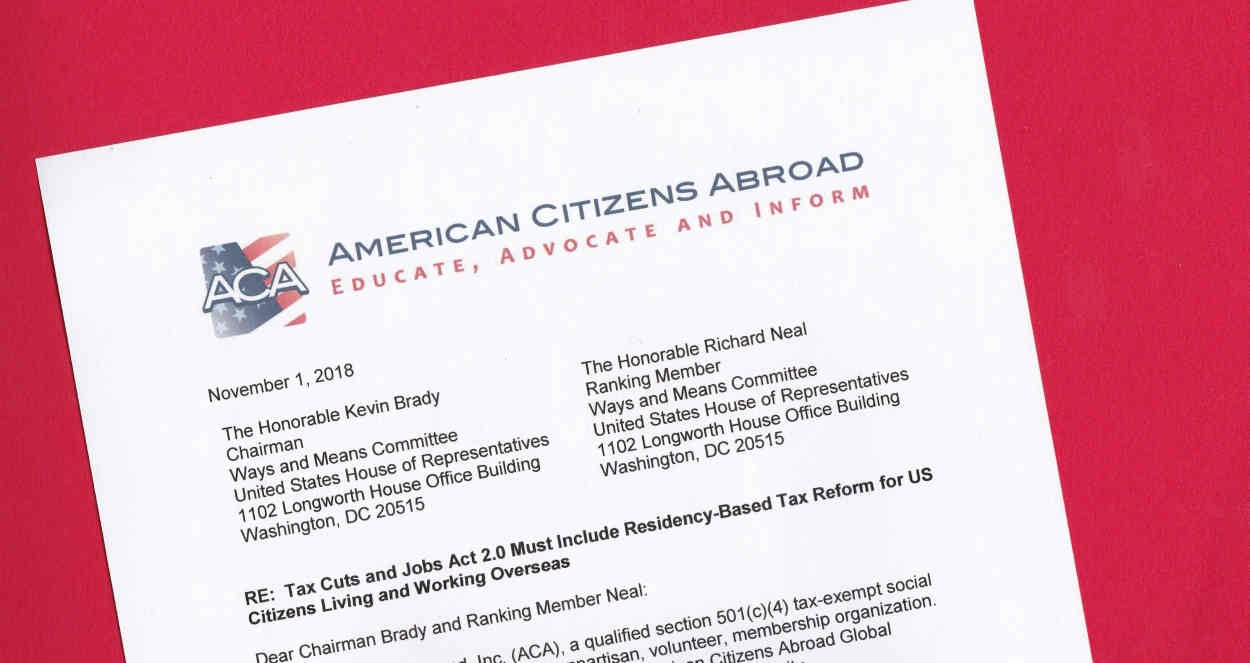 The American Citizens Abroad has called on an influential U.S. congressional committee to end the current system of taxing U.S. expatriates on the basis of their citizenship, as part of the committee's planned revisions of last December’s sweeping tax reform bill.

In a letter to House Ways & Means committee chairman Kevin Brady and ranking member Richard Neal, the ACA stressed that residency-based tax reform (RBT) for U.S. citizens living and working overseas “must be part of TCJA [Tax Cuts & Jobs Act] 2.0”, as the scheduled revisions are referred to.

The organization's letter, dated November 1st, comes just days before the U.S. midterm elections, which have seen a number of politicians considered to be on the side of the expatriate community keeping a low profile on issues of concern to expatriates, apparently out of concern that they not seem less interested in the issues that matter to the majority of those who they are counting on to keep them in office.

"It is ACA's belief that the time has come to pass tax reform for U.S. citizens overseas," last Thursday's letter, which may be read and downloaded on the ACA's website, says.

"Extensive work on the subject has been undertaken and assurances given by Congress and the Tax-Writing Committees...the Tax Cuts & Jobs Act 2.0 must include residency-based tax reform for U.S. citizens living and working overseas.

"An extensive body of work [to support this argument] exists, and Congress has the data to develop legislation."

The ACA has been campaigning in favour of a residence-based tax regime for some time -- it notes, in fact, in its letter that in 2016 it was "the first organization to provide to the public, the Congress and the tax-writing committees a road-map or 'vanilla approach' to residency-based taxation (RBT) by taking the current tax regime -- citizenship-based taxation (CBT), and showing where changes in the tax code can be made to transition to RBT."

"ACA Global Foundation, ACA’s educational and research 'sister' organization, was the first (and to this date the only) organization to develop baseline data depicting the situation of US citizens abroad," it continues, in its letter to Ways & Means Committee chairman Brady and committee member Neal.

"This data can be used to make unofficial revenue estimates for RBT, including its various working parts. This data and these estimates were prepared by District Economics Group (DEG), a firm that specializes in economic analysis and insights into the federal revenue, legislative, and regulatory policymaking process, located in Washington, DC.

"...The analysis includes important data on the size, make-up and asset composition of U.S. citizens living and working overseas.

"...ACA/DEG [District Economics Group] analysis shows that, with careful choices, enactment of RBT can be accomplished in a revenue-neutral way.

"ACA is also convinced that the change can be made 'tight against abuse' and without making anyone worse off than they are under current rules."

The ACA letter then goes on to explain that this tax reform is urgently needed, because the Tax Cuts & Jobs Act signed into law by President Trump on December 22 failed to address the way it would affect U.S. citizens living and working overseas.

The result, it says, "is that the tax situation for U.S. citizens living and working overseas has not improved and in many cases, has become much worse."

The ACA's letter is signed by Marylouise Serrato, executive director of the American Citizens Abroad.

As reported, Serrato also testified last month on the Tax Cuts & Jobs Act, saying, at one point, that the U.S. Treasury Department "in our view, is not well informed about the situation of Americans abroad."

“These regulations, in the eyes of tens of thousands of individuals living overseas, are maddeningly cavalier,” she added.

Serrato’s testimony was the latest in a series of efforts the ACA has made thus far this year to call attention to the little-reported but significant problems the Tax Cuts & Jobs Act has burdened thousands of expat Americans with. Prior to her testimony, the organization submitted written comments to the Treasury Department on the effects that the Transition Tax and “GILTI” (Global Intangible Low-taxed Income) provisions of the TCJA were having, and were expected to continue to have, on many of the estimated 5.1 million Americans ACA estimates current live outside of the U.S. (The ACA considers this figure more accurate than the 9 million frequently mentioned, based on its extensive research.)