President Trump's 2017 overhaul of the U.S. tax system, known as the Tax Cuts and Jobs Act, appears destined for its own major overhaul, to judge by the prepared statements of a succession of the Democratic Party's top lawmakers that were delivered during a two-and-a-half-hour Senate Finance Committee hearing on Thursday.

The televised "virtual" hearing, which was called to examine "How U.S. international tax policy impacts American workers, jobs, and investment", mainly focused on large, U.S. multinational companies, which had also been the original target of the TCJA legislation.

The hearing was and continues to be of interest to the expat American community, though, even though individual expat issues weren't mentioned, because the TCJA has caused major problems for many Americans abroad as a result of the fact – as certain TCJA critics have maintained since even before the act was signed – that the legislation’s authors failed to take into account the harm it would do to small overseas businesses owned by Americans.

On Thursday, most of the speakers testifying at the hearing gave their own reasons for recommending changes to the TCJA that they said would significantly raise the tax contributions of America's multinational companies – now said to be at or approaching historic lows – with many also detailing how they would go about it.

First off the mark was Democratic Senator Ron Wyden, pictured above, chairman of the Senate Finance Committee (and thus the co-host of the hearing, alongside the committee's ranking member, Idaho Republican Senator Mike Crapo).

In his introductory remarks, Wyden announced that "in the coming days" he and Sen. Sherrod Brown (D, Ohio) and Sen. Mark Warner (D, Virginia) would unveil what he called "a new framework for international taxation" that he said would "reverse the Trump-era handouts to multinationals".

Wyden didn’t provide any further details of the pending legislation, nor did he say when exactly it would be formally presented.

"The lesson of the Trump tax law is that somehow, you can spend hundreds of billions on multinational corporate tax handouts, and not produce any lasting boost in jobs and investment," Wyden began his remarks by saying.

"This hearing comes just days after the release of a jaw-dropping new report from the Joint Committee on Tax.

"That report found that the Trump tax law slashed the average U.S. tax rate paid by the biggest mega-corporations by more than half. Add to that data from the Congressional Budget Office, which tells us that corporate tax revenues have fallen through the floor. From 2016 to 2019, they dropped by one third.

"The fact is, before 2017, the U.S. already collected relatively little tax from corporations compared to other major economies.

“Despite this, Trump and Republicans still sent the U.S. diving headlong into the global race to the bottom on corporate taxes... 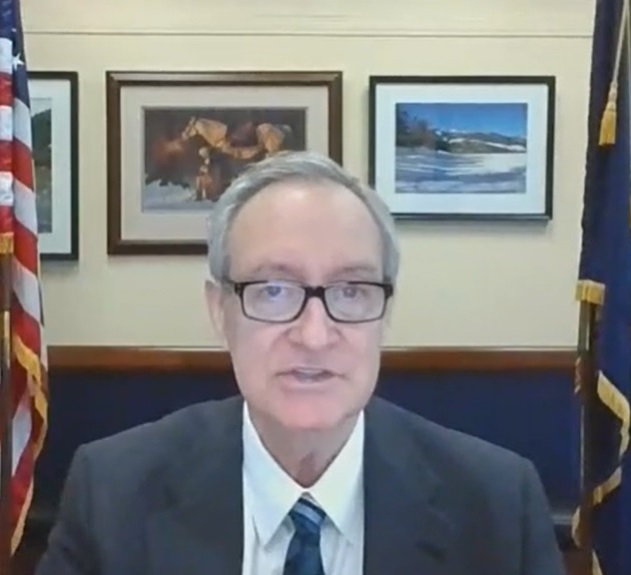 Sen. Crapo set out the Republican position with respect to the TCJA. It sees the Trump tax reform package of 2017 as having addressed such problems as rising "corporate inversions" – a form of tax avoidance that involves U.S. companies making an overseas outpost the company’s official base of operations – and what he said was a competitively "losing proposition" of "one of the world's highest corporate tax rates, of 35%, and the disadvantages of the U.S. worldwide deferral system".

“While the reduced corporate rate moved the United States more in line with the rest of the world, the anti-base erosion measures that were enacted into law are the most robust in the world....

“What we should not do is hastily change the system purely for purposes of raising revenue, bringing inversions and foreign takeovers of U.S. companies right back to the forefront."

Spokespeople for American expat organizations said they were generally encouraged that the Tax Cuts and Jobs Act was clearly in line for a major revamp. Some expressed concern, however, over what they said was the Democrats’ continued failure to acknowledge many of the problems expats have been having in recent years not just with the TCJA but with such other legislation as President Obama's Foreign Account Tax Compliance Act (2010), and America’s citizenship-based tax and citizenship renunciation regimes.

Speaking from Washington, DC, Charles Bruce, chairman of the American Citizens Abroad’s Global Foundation, said he was heartened by what seemed to be a “bipartisan consensus” that something needed to be done about the TCJA, and that this consensus seemed to be more along the lines of fixing it than getting rid of “the whole thing”.

In particular, he added, there appears to be a view that territorial taxation for corporations is worth keeping, which suggested that its “kissing cousin, residence-based tax, for individuals” might well be on the table this time around.

“There’s a sense that the taxation of individuals sits right up there, alongside the taxation of corporations, as it always has done in the past, at least before the TCJA, and that there, it should have as well,” Bruce said, on Friday.

“A spokesman for the Paris-based Association of Americans Resident Overseas (AARO) endorsed Bruce's observations, and added that the reforms to the TCJA should repair the damage that it's already done to small businesses owned by expats, in addition to being carefully checked in advance of being signed into law, to ensure it avoids creating new burdens.

"Small business concerns are too often overlooked when measures are designed to target or benefit other groups, notably large, multinational enterprises like Apple and Google,” the AARO spokesperson added.

Monte Silver, a U.S. tax attorney resident in Israel who is partner and founder of the Tel Aviv-headquartered, U.S. tax law firm Silver & Co., has led a well-publicized campaign against the TCJA's "Transition Tax" element, which introduced a one-time, retroactive tax on the previously untaxed foreign earnings of "controlled foreign corporations", or CFCs, owned by U.S. shareholders, including small business owners like himself.

As reported, Silver filed a lawsuit against the IRS and U.S. Treasury (Monte Silver Ltd. v. IRS) in January 2019, in connection with the Transition Tax, and "virtual" hearings took place earlier this month in a U.S. District Court in Washington.

Silver didn't immediately reply to a request for comment on Thursday's hearings. However, in a comment on Facebook on Friday, he said that if he won the case – which he said he was "certain [that] we will" – his focus would then turn to "applying maximum pressure on the Treasury to form an 'expat committee' to address GILTI [Global Intangible Low-taxed Income tax]/Transition/FATCA, [Passive Foreign Investment Companies] and other issues expats suffer from".

He added: "I will do so using the successful tools we used three years ago [to challenge the expat-damaging elements of the TCJA]  – email campaigns that fill the inboxes of senior Treasury officials."

Silver, who is a member of the AARO board, said that as part of such a campaign he would ask organizations like AARO as well as the Democrats Abroad, Republicans Abroad and American Citizens Abroad to join forces in his effort, and that he would "keep the community advised of who cooperates".

As reported, in June of last year, Silver filed another legal challenge in the same Washington, DC court as his Transition Tax lawsuit over another aspect of the TCJA – specifically, its so-called “global intangible low-taxed income” (GILTI) elements. Last month, however, the court stayed his GILTI challenge, pending resolution of the Transition Tax matter.

Among the least impressed with the direction Thursday's hearing seemed to indicate that the U.S. plans to go, with respect to its international tax regime, was John Richardson, a Toronto-based lawyer and longtime and visible campaigner on American expatriate tax and citizenship issues.

He said he saw the Democrats wanting to "increase the U.S. corporate tax rate generally" as well as "doubling the tax rate on GILTI, either of which would, for different reasons, be very damaging to Americans abroad."

"This will have a very bad tax and compliance result for Americans abroad.

"The bottom line is that any discussion of tax reform for corporations will affect American individuals abroad as well – because they are, effectively, treated as though they are mini-multinationals."

A video of the hearing may be found here, as well as on YouTube, by clicking here.