A bill that would establish an exemption to FATCA for U.S. citizens living and working outside of the U.S. has failed to be included as an amendment to the National Defense Authorization Act, according to reports.

One of the first to report the news was the Democrats Abroad's Taxation Task Force, which tweeted, just after 9am UK time, that "HR 5799", the "Overseas Americans Financial Access Act", was "not adopted as an amendment" to the National Defense Authorization Act for Fiscal Year 2022". (See tweet, above.)

A lengthier report has also emerged on the Falls Church, Virginia-based tax news website, TaxNotes.com, which is reporting today that the amendment in question, "introduced by House Oversight Committee Chair Carolyn B. Maloney, D-NY, is not among the 650 amendments the House will consider if it votes as expected [on] July 13 [yesterday] to begin consideration of the defense bill."

As reported here yesterday,  Rep. Maloney had formally re-submitted the Overseas Americans Financial Access Act – a bill she has been promoting, in various forms, for years, known in its current form known as HR 5799 – as an amendment to the NDAA, which is a major piece of U.S. government legislation that is enacted every year in order to fund the U.S. military. 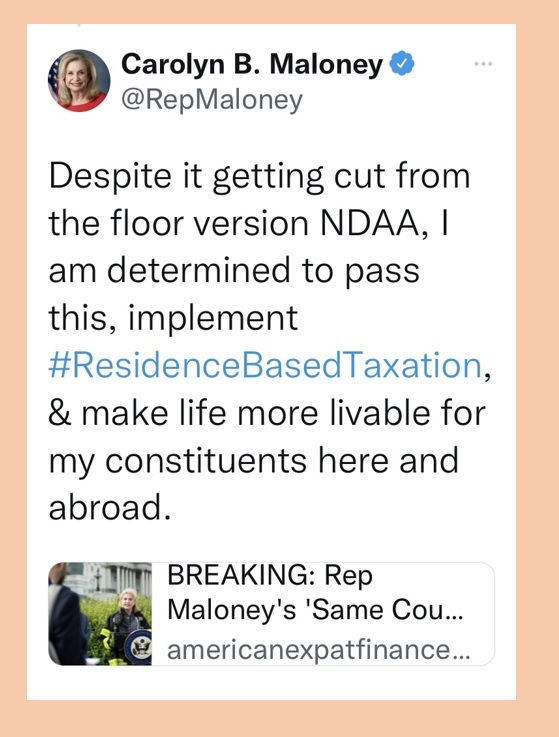 Rep. Maloney's office didn't immediately respond to a request for comment. The media page of her website featured four press releases dated today (July 14) that had to do with other aspects of the NDAA, but none of them mentions her Overseas Americans Financial Access Act amendment.

Around 9pm Washington time tonight, Rep. Maloney tweeted: "Despite it getting cut from the floor version NDAA, I am determined to pass this, implement #ResidenceBasedTaxation, & make life more livable for my constituents here and abroad." (See left.)

In Washington the NDAA is well known for it potential as a vehicle through which legislation that potentially affects the U.S. military and/or its employees may be introduced, and for this reason, had evidently seemed a logical avenue for helping the millions of Americans overseas who have been struggling for years to obtain and keep even the most basic overseas bank account, many of whom are U.S. government employees including military personnel.

'Not ready to surrender'

According to the Tax Notes report (which is behind a paywall), Rep. Maloney is "not ready to surrender" to surrender her pursuit of the exception, although "it may not come as part of the defense bill".

"This needed adjustment to FATCA has been a priority for years," the report quotes the lawmaker as saying.

"We have tried to push forward this initiative, and we will continue trying so that American citizens abroad can safely utilize banking services.

"While this amendment was not included in the [National Defense Authorization Act's] final list of amendments, I will continue working with my colleagues on an ultimate solution." Rep. Maloney's submission, which may be found online by clicking here, was dated July 5.

As most expat Americans these days have come to realize, the reason they and others like them have been struggling to maintain overseas bank accounts for more than a decade is due to a 2010  tax evasion-prevention law known as FATCA (Foreign Account Tax Compliance Act).

FATCA was conceived by lawmakers to discourage American taxpayers from hiding assets and income in non-U.S. financial institutions by penalizing such institutions if they were to be found to have American-citizen (and Green Card-holding) account-holders whose accounts these institutions had failed to report to the U.S. every year, but it is probably best known at this point for having made life unexpectedly difficult for expats, and driven thousands to renounce their citizenships rather than struggle with the compliance hassles and costs.

The scale of FATCA's impact on U.S. expats, tax experts say, is due to the fact that the U.S., unlike every other country except for Eritrea, taxes its citizens on the basis of citizenship rather than where they live, a legacy of the U.S. Civil War in the 1800s that results in millions of U.S. expats – and their banks – having a significant reporting obligation to address every year.

(Nationals of other countries who live outside of their home countries don't have anything like the same issues as a result of a similar "automatic information reporting" law that most of their countries signed up to after FATCA was introduced, known as the Common Reporting Standard.)

Even years before FATCA came into force, non-U.S. banks and financial institutions began telling their existing American account-holders to take their business elsewhere, and refusing to take on any new American clients, to avoid having to deal with these information-reporting obligations.

Some critics of the same country exception concept have argued that its benefits would be limited because it would only apply to certain types of basic banking accounts, and because, there's already is a carve-out for such accounts for amounts of less than US$50,000.  Such critics typically argue that only a complete change by the U.S., to a residence-based tax system from its current citizenship-based regime, would be sufficient to fix the situation in which American expats currently find themselves.

Meanwhile, the situation has been made more complex as a result of the introduction of a high fee for renouncing one's U.S. citizenship (US$2,350), the introduction of which coincided with FATCA's coming into force, and for those with a net worth of US$2 million or more, including the value of their home, an "expatriation tax" that many say is prohibitive.

As most FATCA followers know, the idea of a "same country exemption" to FATCA is almost as old as FATCA itself.

On the ACA's website, for example, an article about the "SCE" says that ACA first proposed that the U.S. Treasury "amend the FATCA regulations to exempt Americans residing in a foreign country from the rules in FATCA requiring banks and other foreign financial institutions to report on US account holders’ accounts" back in 2015.

Rep. Maloney, meanwhile, in 2019 re-introduced what she then referred to as the Overseas Americans Financial Access Act (HR 4362), which, like HR 5799, was described as having been designed to direct the IRS to exclude from the need to report, under FATCA, "[certain] financial accounts held by American citizens in countries where they are bona fide residents."

In November of 2021, she re-introduced the Overseas Americans Financial Access Act, along with her Commission on Americans Living Overseas Act, which she is also in the process of attempting to re-introduce.

Editor's note: This story is still developing and may be updated.