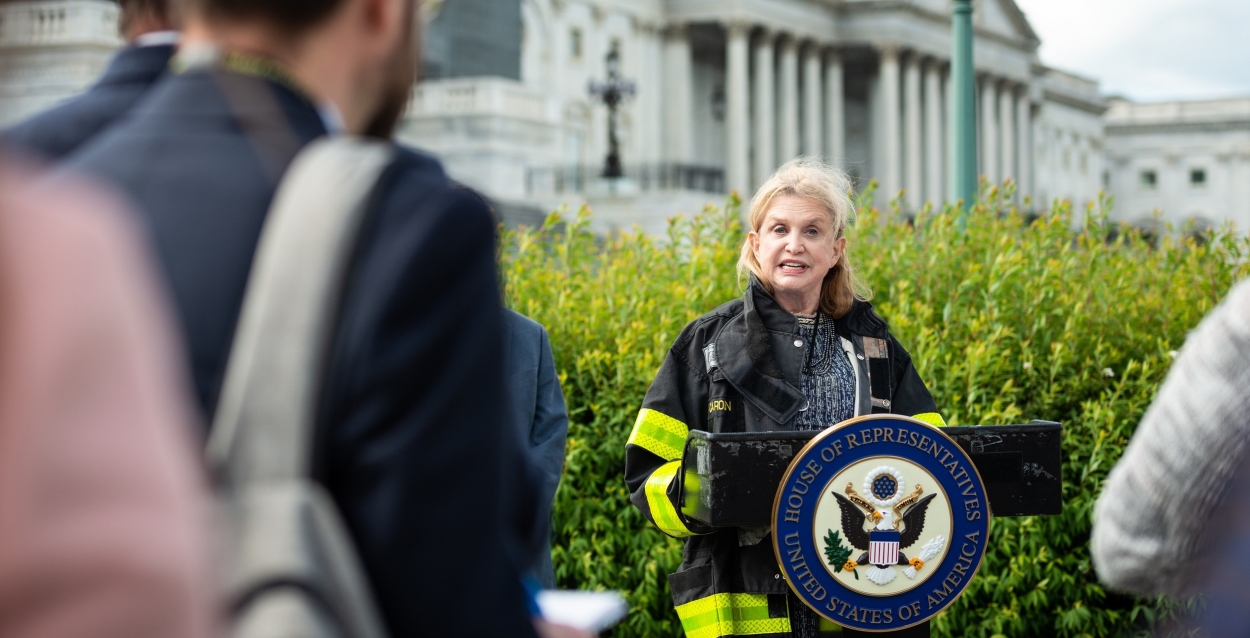 Rep. Carolyn Maloney in 2019, in a custom-made fireman's jacket in order to promote a bill aimed at providing for the families of victims of the 9/11 terrorist attacks

Questions about who – if anyone – will succeed Rep. Carolyn Maloney as the most consistent (if not always loud) voice on behalf of America's expats in Congress are being asked, as news of Rep. Maloney's loss in Tuesday's New York primary elections to fellow democrat and Representative Jerrold Nadler spreads across Expatland.

Rep. Maloney, 76, who has served in the House of Representatives for three decades, was only obliged to have to fight to keep her seat as a result of a redistricting of the two Democrats' Manhattan voting districts earlier this year.

As reported, New York's 12th District, which Rep. Maloney and Rep. Nadler (age 75) were having to compete to win on Tuesday in order to remain in Congress – where they've served alongside each other since the 1990s – has one of the largest concentrations of Democrats living abroad of any U.S. district. This is thought to be what inspired Rep. Maloney to co-found the bipartisan Americans Abroad Caucus in 2007, alongside Republican Rep. Addison Graves "Joe" Wilson of South Carolina (who is still in Congress and still a member of the caucus).

(The other 33 members and co-chairs may be viewed by clicking here.)

According to the Board of Elections, Rep. Nadler won 55.35% of the votes cast on Tuesday, compared with Maloney's 24.35%. A third candidate, Suraj Patel – who nearly beat Rep. Maloney in a primary race two years ago – managed to capture 19% of the votes, which some said siphoned "crucial votes" away from her, although not enough to be the reason for her loss.

In addition to being co-founder and co-chair of the Americans Abroad Caucus, Rep. Maloney was also chair of the House Oversight Committee, and a longtime veteran of its  Financial Services Committee.

Rep. Maloney's office didn't immediately respond to an emailed request for comment, nor did others who were asked.

In its article about Rep. Maloney's loss at the polls, the New York Times said Tuesday's defeat was likely, for her, "to spell a painful end to a path-breaking career in elected office."

It added: "A former teacher and legislative aide, she first won a seat on the City Council from East Harlem in 1982, and a seat in Congress representing the East Side’s famed 'Silk Stocking' district a decade later, eventually rising to become the first woman to lead the Oversight Committee.

" 'I am proud to have followed in the footsteps and stand on the shoulders of the strong New York women who opened doors and took on the tough battles.' Ms. Maloney said in a concession speech.

" 'We cannot and we must not give up. The fight continues.' "

As reported here last November, Rep. Maloney at that point announced that she was being joined as head of the Americans Abroad Caucus by two new co-chairs: Dina Titus, a Democratic representative from Nevada, and María Elvira Salazar, a Republican who represents a district in Florida. 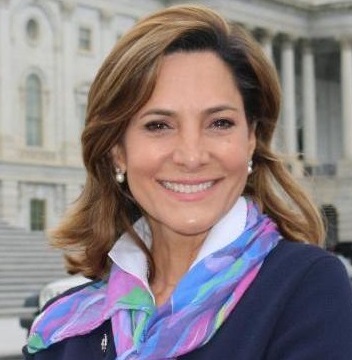 Of most relevance to Rep. Salazar's role as co-chair of the Americans Abroad Caucus is probably the fact that she was born to Cuban exiles in Miami's Little Havana neighborhood, according to her website biography, where she grew up speaking both Spanish and English. She also spent part of her childhood in Puerto Rico.

Since entering Congress in 2019, Rep. Salazar (pictured left) is said to have assumed the role of the Republican party's unofficial LatAm voter's advocate, speaking out on such issues as pro-democracy efforts in Cuba and Nicaragua, and the need to close "loopholes that kleptocrats from around the world use to launder money in the United States."

Rep. Titus appears to have come to Congress from academia, where, as "Dr. Titus" with "professor emeritus status", she taught American and Nevada government classes from 1979 through June 2011, according to her website bio. She continues to be "internationally known for her expertise in the history and policies related to nuclear power, weaponry, and waste", as well as for her knowledge of the popular lore of "Atomic Culture".

The unexpected news that Rep. Maloney is to leave Congress in early January of next year also leaves the fate of legislation she's introduced in doubt.

Last November, while announcing that Reps. Salazar and Titus would be joining her as co-chairs of her caucus, Rep. Maloney also announced the re-introduction of two pieces of legislation that she had first introduced in 2019: the Overseas Americans Financial Access Act, and the Commission on Americans Living Overseas Act.

As reported, when Republican Rep. George Holding lost his seat – also in the wake of a redistricting – at the end of 2020, he and others had insisted that his Tax Fairness For Americans Abroad Act would be reintroduced. However, it never was, nor did any Republican lawmakers immediately step forward to take his place as a champion of the American expat cause.