Some 28 out of the 750 names on the U.S. government's latest quarterly list identifying Americans who have – as the Federal Register in which the names appear every three months puts it – “chosen to expatriate,” have appeared on previous lists, the American Expat Financial News Journal can exclusively report today.

The 28 previously-published names bring the total number of duplicate names thus far this year to 341, out of a total of 2,791 names published, according to data obtained by the AXFNJ from a source who requested anonymity.

The source is a former American citizen based in Europe, who has had experience in working with the Federal Register's renunciation data, and who works professionally in a similar, data-focused capacity.

As reported here last November, this same source broke the news of the name duplications, after spotting some of them in the third quarter of 2021's data. At the time, he said we could refer to him as "Jeffrey", which we will do again here today.

What prompted him to investigate the numbers, Jeffrey explained last year, was the fact that his own name appeared on the Federal Register's then-latest list – even though it already had appeared on an earlier list previously.

After doing some basic work comparing two previous years’ quarterly lists of names with the latest one, he determined that, of the 977 names on the Q3 2021 list, as many as 478 had previously been "doxed”.

(“Doxing”, also spelled doxxing, is a slang term favored by many expatriating Americans when referring to the Federal Register’s quarterly list, and is usually defined as the act of having one’s personal information publicly revealed, typically in an online context).

As the table at the top of this article shows, based on Jeffrey's analysis of the Federal Register's past and latest data, the government is showing that some 2,791 Americans have officially expatriated thus far this year, but of those 2,791 names, some 341 have already appeared on previous Federal Register expatriation lists.

The American Expat Financial News Journal has emailed the U.S. Treasury Department's press office to find out why the Federal Register list often contains names of people that have appeared previously, and whether there are any plans to review the data, with the thought of potentially updating it if necessary.

How the Q3 total compares with
previous quarterly numbers

Although there is still one more quarter of data to go before a total number of U.S. citizenship renunciations can be compiled, the latest list seems to suggest that U.S. embassies and consulates around the world are beginning to process applications in numbers similar to those that they typically did before the Covid lockdowns that saw numbers fall off.

(During the lockdown, which saw renunciation services being completely stopped for more than a year in many jurisdictions, a backlog of un-published names was seen to have kept the quarterly numbers higher than otherwise might have been expected. Some say that the inclusion on these lists of the names of Green Card holders who have formally gone through the handing-back process -- which they don't need to do in person, the way citizenship renunciants must -- might also have kept the numbers higher.)

As reported, the 1,473 names published for the 2022 quarter that ended on June 30 was – at least before the 289 names that appeared to have appeared on previous lists, mostly from 2021 – the fifth-highest number ever, and the most since the second quarter of 2020, when 2,406 names were published. (see table, below). 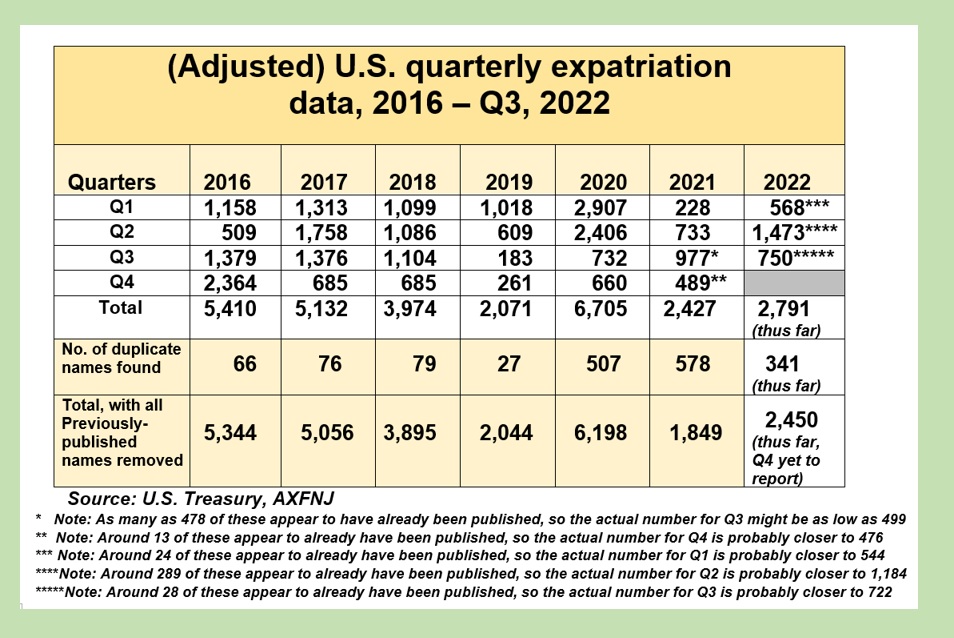 As regular AXFNJ readers know, in the absence of other publicly-available data from the government, the Federal Register's quarterly lists of renunciants' names are closely monitored by many citizenship advisers and others in the American expat community, as well as by many of those who are currently in the process of renouncing, for whom the publication of their names is seen as proof that the process has at last been completed.

However, there has long been a consensus among some seasoned observers that the  Federal Register's lists are far from perfect – almost to the point of irrelevance, not only because some of the names have appeared before, but because it's said not all the names appear on these lists, but on other ones, although this has never been confirmed.

Whether or not the names of Green Card holders – who are not technically U.S. citizens but citizens of other countries who have been given “long-term resident” tax status in the U.S., which requires them to formally apply to be released from this – are included on the Federal Register’s quarterly lists has, meanwhile, been a matter of some debate, although though the introduction to this list says that it does.

It was formally introduced in April, 1995 by a Florida member of the House of Representatives named Sam Gibbons, who was the senior ranking Democrat on the Ways and Means Committee at the time, according to contemporary reports of the list's origins.

But it was only after the Foreign Account Tax Compliance Act (FATCA) was signed in 2010, and began to affect expats by making it more difficult for them to find banks and investment companies that would continue to have them as clients, that renunciations began to soar.

The latest quarterly list of names of those who have formally expatriated may be viewed on the Federal Register's website by clicking here.