American expats living in New Zealand are urging others there to sign a new petition that aims to convince members of the New Zealand Parliament to tweak the regulations governing the way the country's KiwiSaver pensions are run, in order to free U.S. expats there from what they say are the impossibly high annual costs required to comply with U.S. foreign grantor trust reporting obligations.

The petition has only just been launched, but those familiar with the issue are adamant that it be adopted by New Zealand lawmakers, because of the hardship many Americans living in the country are currently struggling with.

At issue are certain U.S. foreign trust reporting forms known for their complexity, even among tax experts: Forms 3520 and 3520-A.

One American/New Zealand dual national who has been quoted on the matter in the New Zealand press recently, in connection with the petition and the reasons behind it, has been Kira Bacal, a University of Aukland educator, doctor, and single parent to four New Zealand-born children (ages 13, 10, and 8-year-old twins).

According to an article in Stuff.co.nz, Bacal said she had signed her children up to KiwiSaver – a government pension program sometimes likened to the U.S.'s Social Security regime – thinking she was providing for their futures, only to discover that by doing so she had "entangled them in a net of U.S. tax authority red tape, requiring extensive tax filings every year", even now, when they're still youngsters.

"The filings were so complex that only an accountant could prepare them," Bacal added. But when she went to try to shut these KiwiSaver accounts, she discovered that New Zealand doesn't permit such closures.

Instead, once opened, "a KiwiSaver account can be closed in only limited circumstances: When the account-holder dies, [or] permanently emigrates," the Stuff.co.nz article went on.

According to the article, the cost of hiring a tax professional to handle the reporting obligations typically runs NZ$750 (US$436) or more per KiwiSaver account per year.  Failure to file such forms when they should have been but weren't, meanwhile, could result in a penalty of US10,000 (NZ$17,200) a year.

'Petition for dual nationals not
sufficiently warned of the potential dangers'

Bacal told the American Expat Financial News Journal that she saw the petition as being intended specifically to help those "who, like my children, are dual nationals, and whose Kiwisavers were opened without anyone warning them, or us, of the attendant tax responsibilities (and their costs).

"At the very least, the Kiwisaver providers – who do, in fact, advertise to recruit children and market their product to parents – should be required to warn such would-be clients of the need for them to obtain specialist advice before opening accounts for those with dual citizenships."

The just-launched petition, Bacal added,  asks the New Zealand government, "which claims to allow its citizens to access their Kiwisaver money in the event of financial hardship, to allow under-18 year-olds to have their accounts closed, in the event they are caught in this trap as dual nationals.

"In point of fact, it's been my experience that the Kiwisaver providers do not acknowledge financial hardship in practice, and actually make getting funds released all but impossible [for clients in hardship situations].

"[Meanwhile], most people in financial extremis are unlikely to have the time or knowledge to jump through the myriad hoops required."

Bacal said she had publicly offered to donate all of the money currently contained in her childrens' Kiwisaver accounts "to the New Zealand government, our Kiwisaver provider, a charity of the prime minister's choice, or even Santa Claus, for all I care," because the "thousands of dollars in annual reporting costs" that she'd save would be so much greater than what's currently in them.

The Kiwisaver petition, which has been set up under the New Zealand Parliament's online petititons' facility (and which may be viewed by clicking here), is the work of a New Zealand-based IRS Enrolled Agent named David Tzimenakis, who not only isn't an American expat himself, but is actually British, although he's been looking after American expats out of Aukland for the past decade. 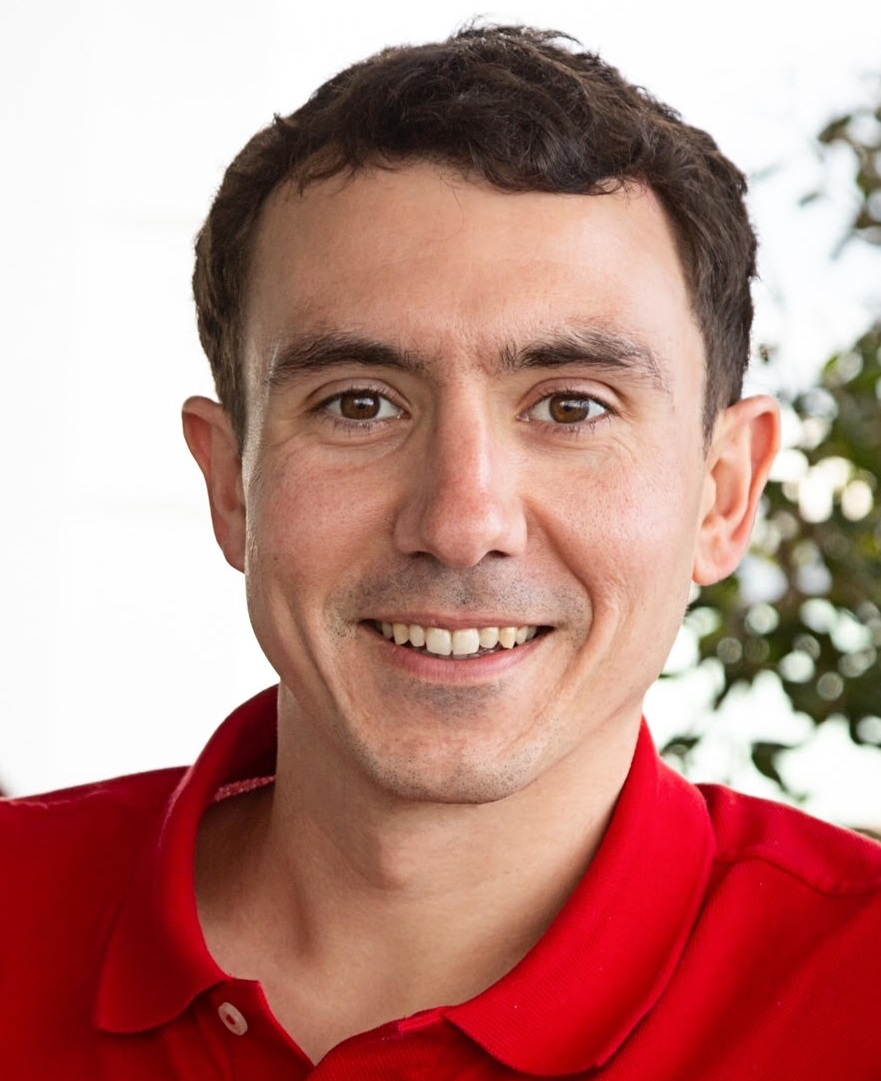 Tzimenakis, pictured left, a client service manager for US Global Tax in Auckland, says he decided to go ahead with what's officially being called the "Petition of David Tzimenakis: Adjust the KiwiSaver Act to permit dual-tax residents to close KiwiSaver [accounts]" because he has seen the KiwiSaver reporting obligation issue "cause so many problems" for American expats, many of whom are clients of his of long-standing.

"No U.S. citizen parent should be forced to renounce their citizeship, just because of a foreign retirement account," he adds. 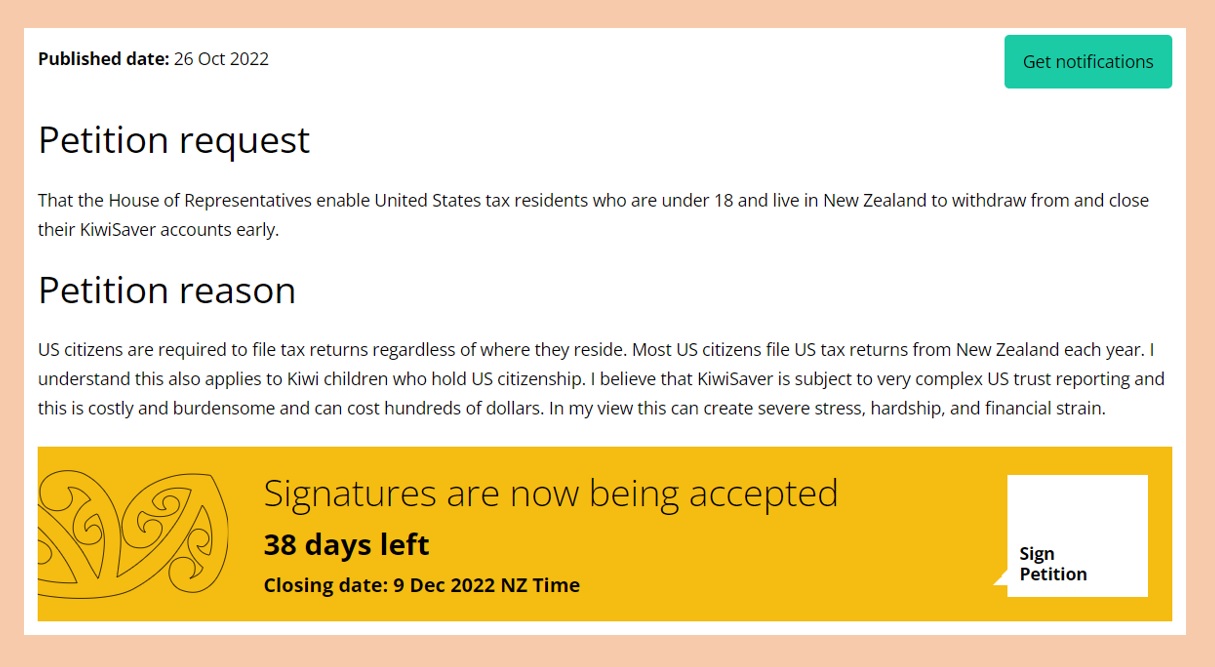 The petition, a screen-grab of which is pictured right, went live on Oct 26, and as this article was going to press, it had 285 signatures. It will remain open until December 9, by which time Tzimenakis say he is hoping it will have at least 2,000 or more names, which he acknowledges could depend on such factors as the media coverage it receives.

According to Tzimenakis, KiwiSaver accounts are government-sponsored retirement schemes established by something known as the KiwiSaver Act, which were conceived to encourage New Zealanders to save for their retirements. Among the built-in incentives are the fact that KiwiSaver beneficiaries can be eligible for such specific benefits as tax-free withdrawals, once they reach retirement age.

In addition to requiring that all KiwiSaver accounts be held in trusts that, once opened, can only be closed under very specific circumstances (as mentioned above), such as moving away from New Zealand, salaried beneficiaries of KiwiSaver accounts are required to contribute at least 3% of their wages,Tzimenakis says, while their employer is also required to contribute at least that amount.

The problem for many Americans, including Bacal (who is one of his clients) and her children, Tzimenakis goes on, is when more than 50% of the contributions to someone's KiwiSaver account "have come from an individual rather than an employer," because this means that the U.S. government considers it to then be "a foreign grantor trust for U.S. tax purposes, and thus forms 3520  and 3520-A are required to be filed each year."

KiwiSaver accounts opened for young children, he adds, automatically fall into this category, "as they are immediately seen as foreign grantor trusts, and thus subject to the IRS's reporting requirements."

Making matters worse, the complexity of the forms required means that most of those who need to report such accounts "need to engage an accountant to assist them, which can be expensive.

"At US Global, we do this at cost for our clients, but it is still ends up being a lot of money for many people."

A measure of the complexity of the forms Tzimenakis is talking about was highlighted three years ago by Gary W. Carter, a certified public accountant based in Minnesota, with decades of experience as a tax adviser, professor and revenue agent. In an article that originally appeared on a California-based news and analysis website for U.S. tax professionals known as TaxConnections.Com, which was subsequently republished by the American Expat Financial News Journal, Carter bravely detailed a nightmare scenario involving how a number of form 3520 and 3520-A filings he did went disastrously wrong for five of his clients ("so far", he said, at the time the article appeared).

Carter explained his willingness to go public with what had happened to him out of a desire to help other accountants and individuals who might unwittingly also fall foul of the IRS's lack of clarity and uncompromising approach, with respect to these particular foreign grantor trust reporting forms.

More in this category: « Douglas O'Donnell named acting IRS commissioner, ahead of Charles Rettig's scheduled departure Greenback Tax’s McKeegan: ‘7.1% increase in the FEIE in 2023 increases options for U.S. expats in the UK’ »