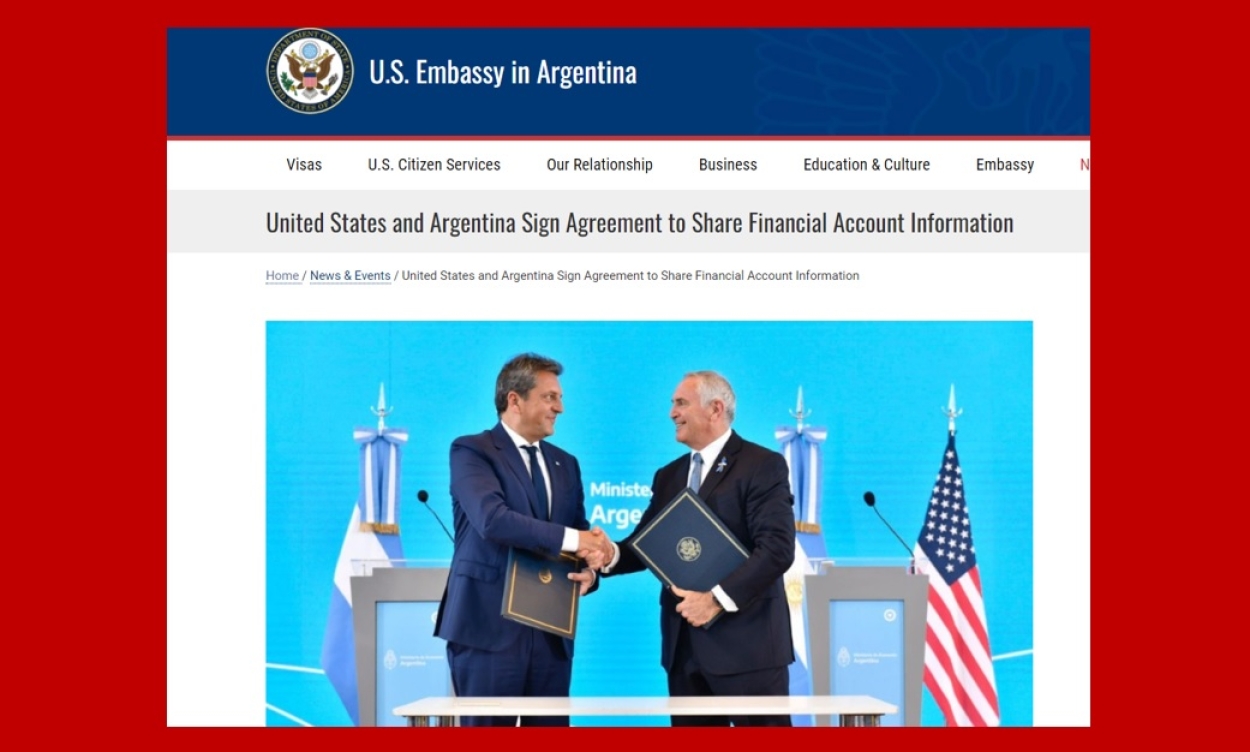 (...but it's said no more reciprocal than other Model 1 IGAs)

Argentina has at last agreed a FATCA Intergovernmental Agreement (IGA) with the U.S. government, according to a statement on the website of the U.S. Embassy in Argentina, tax industry sources, and news reports in that country.

Until now, Argentina had not participated in the U.S. Foreign Account Tax Compliance Agreement program, which was signed into law in 2010, and came into force in 2014.

Currently some 113 countries are signed up to FATCA (according to the Treasury's website, where the new Argentina IGA may be downloaded), a number that doesn't include Argentina yet, as the agreement was only just signed on Dec. 5 (when the above photograph was taken).

What has interested some FATCA-watchers about this just-signed FATCA IGA, meanwhile, has been the way some news articles and even certain U.S. and Argentinian officials make reference to the deal's "reciprocity," since experts insist that it is no more reciprocal than other Model 1 agreements already in force with countries around the world.

Although a sentence in the U.S. Embassy in Argentina's website announcement of the deal refers to the fact that the just-signed IGA "will enable the reciprocal exchange of certain financial account information between the United States and Argentina, while ensuring appropriate data protection," tax industry experts say that the reciprocity will in fact be limited with respect to the information U.S. financial institutions will be required to provide to Argentina.

Ross McGill, a UK-based tax expert whose company is T Consult Ltd, explained the one-sided nature of the FATCA IGAs by noting that they are, first and foremost, agreements "between governments and, on their own [therefore] have no effect on a financial institution."

"All governments with IGAs in force have had to enact domestic legislation to force their financial institutions to gather and report account information to them, so that they can meet their IGA obligation to share that information with the [relevant] U.S. Competent Authority, the IRS," McGill added.

"On the reciprocal side, though, the U.S. has never enacted U.S. domestic legislation to force its financial institutions to do the same, so the IRS does not have data on accounts held with U.S. banks by [taxpayers of other countries].

"The only data the IRS does have [on such individuals] are 1042-S information returns from non-qualified intermediaries, who must report at beneficial owner level. These 1042-S returns are being packaged and sent back to [the relevant] IGA-partner Competent Authorities.

"The data is incomplete, though, because 1042-Ss submitted by qualified intermediaries is pooled, so no account-level data exists."

That some in Argentina might have preferred a more reciprocal FATCA was highlighted in an article about the new agreement in the English-language Buenos Aires Times on Dec. 6, which quoted the Argentinian Economy Ministry as estimating that undeclared funds held in U.S. accounts by Argentinians currently "stand at around US$100 billion, out of a total US$400 billion [in undeclared funds held] worldwide."

Such concerns are why the lack of reciprocity in many long-established FATCA IGAs has been a matter of growing concern recently in some countries, such as France.

This is because of the fact that the U.S. is not signed up to the "global FATCA" tax information agreement known as the Common Reporting Standard, which, some critics outside of the U.S. have said, has enabled the U.S. to become a major tax haven for residents of countries that are signed up to the CRS.

As reported here in May, the UK-based Tax Justice Network placed the U.S. at the top of its latest Secrecy Index, with what it said was a "record" secrecy score, which it attributed to the U.S.'s "fail[ure] to meet international standards and practice on information exchange with other countries."

The idea of introducing reciprocity to all the existing FATCA agreements has been much discussed in recent months, including by then-IRS Commissioner Charles Rettig back in April, when he said he supported reciprocity, in response to a question he was asked during a Senate Finance Committee hearing.

A measure that would have added a FATCA reciprocity requirement to a French budget bill was added by France's National Assembly in late July, but France's Senate later "adopted an amendment aimed at deleting" this on Aug. 2.

In a brief statement delivered on Dec. 5, at the time of the FATCA IGA signing, U.S. Ambassador to Argentina Marc Stanley stated that the FATCA agreement was "important" and marked "a significant step forward in our mutual efforts to combat offshore tax evasion [affecting] both countries," while also adding to "transparency in the global financial system."

His Argentinian counterpart, meanwhile – Economy Minister Sergio Massa – was quoted by the Buenos Aires Times as saying that "access to this information is an act of fiscal justice, because by detecting tax evaders, we will be able to reduce the tax burden on all those who comply with their obligations every day, while seeing others hiding their money in tax havens.

"With this agreement, there begins a deeper and more mature chapter in the relationship between both countries."

With the deadline for compliance with the new reciprocal FATCA IGA now looming, meanwhile, Argentinians with undeclared bank accounts are to be offered a tax amnesty program, according to a report on the website of the English-language Buenos Aires Herald.

On Tuesday it reported that the Argentinian Economy Ministry was in the process of drafting a tax amnesty bill "for Argentines with money, goods, or financial assets in undeclared accounts" in the U.S., and that this bill would be presented to the Argentinian Congress for its approval in due course.

Among the first Argentinians to voice skepticism as to the degree to which the new agreement might benefit Argentina was an opinion journalist with the Buenos Aires Times named Agostino Fontevecchia.

In an article published on Dec. 17, Fontevecchia noted that while a genuinely reciprocal FATCA agreement would make sense in a world in which "there seems to be an interest by certain global superpowers in maintaining the existence of tax havens in certain jurisdictions, including those under U.S. and British control," the agreement signed in Buenos Aires on Dec. 5 was in fact no more reciprocal than 60% of the other 113 supposedly reciprocal IGA agreements that the U.S. has with other countries across the globe.

"This agreement, coupled with a new whitewash tax amnesty [under discussion], could help [Argentina] rake in billions of dollars in revenue," Fontevecchia writes.

"And those who don’t comply could be in serious trouble, we are being led to believe.

"Unfortunately – for [Argentina Economy Minister Sergio] Massa – the experts that have seen the fine print don’t believe either part of the minister’s plan has a lot of teeth, or any for that matter."

As most American expats have come to know by now, FATCA was signed into law by the U.S. in 2010 as a revenue-providing element of a domestic jobs bill known as the HIRE Act, which it would do while at the same time discouraging money laundering, the financing of terrorism, and tax evasion by U.S. citizens.  FATCA mandates stiff penalties for foreign financial institutions that fail to report the bank account details, including assets, of any of their clients who happen to be U.S. citizens or Green Card holders.

Because it is enforced alongside the U.S. system of citizenship-based taxation, FATCA has meant that the estimated 4 million to 9 million U.S. citizens who live outside of the U.S. are obliged to file tax returns every year with the U.S. government, as well as to report all of their non-U.S. bank and financial accounts, via so-called Foreign Bank Account Reports, if these total more than US$10,000 at any point during the U.S. tax year, even if it's just for one day.

This means that being an American expatriate or Green Card holder living outside of the U.S. has become a lot more complicated over the past eight years, and in most cases, more expensive than it was before FATCA came into effect in 2014.