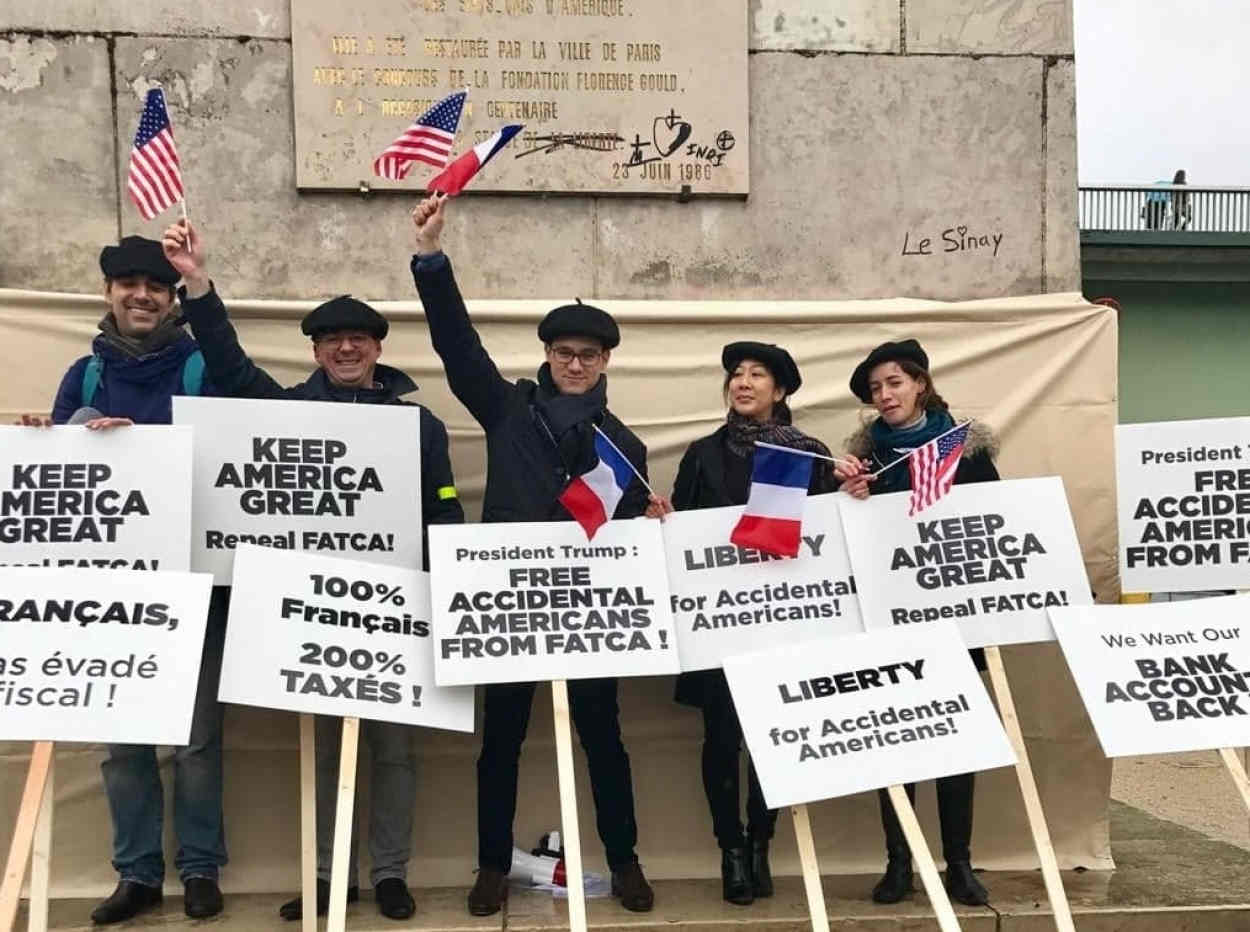 Members of the Accidental Americans Association, above, demonstrated last November in front of a replica of the Statue of Liberty on the Île aux Cygnes (Isle of Swans) in Paris

The Accidental Americans Association, a Paris-based group that campaigns for fairer treatment for those who left the U.S. as babies or never lived there but who say they are nevertheless burdened by unfair U.S. tax obligations, has launched what it calls a "major lobbying campaign" to educate American lawmakers of these "accidentals'" plight.

The AAA plans to target Democratic members of the House of Representatives first, "because they hold the majority in the House, and because it was under the former Democratic president that FATCA [the Foreign Account Tax Compliance Act] was born," said AAA president Fabien Lehagre, referring to the 2010 legislation that for the first time enabled the U.S. to enforce its citizenship-based tax regime.

The AAA currently has some 750 members, according to Lehagre, who founded the organization in 2017.

The U.S. is one of just two countries in the world that taxes on the basis of citizenship, the other being Eritrea. Many expat Americans and organizations representing them argue that the citizenship-based tax regime is what enables the U.S. to pursue expats, including thousands of individuals who have never spent much if any time on American soil, for taxes, penalty fees and other charges that these expats regard as excessive and unfair.

The AAA is setting a deadline of the end of this month for "accidentals" around the world to write to the Democratic House of Representative member of their place of their birth, and has provided a template  for them to use.

The organization said it will ask the same "accidentals" to write the same letter to their relevant Republican House of Representatives members next.

He requested that those sending these letters not modify them too much, to ensure that their message is consistent.

Below is the template of the letter the AAA is providing.

This email address is being protected from spambots. You need JavaScript enabled to view it.

I was born in your district, in [Place of birth (city)], on [Birth Date]. I left the United States with my parents when I was [stayed in the U.S.], and have lived outside America ever since.

I am writing to you to draw your attention to the difficulties I am encountering – as are hundreds of thousands of other citizens of foreign countries, who like me also happen to be regarded as U.S. nationals, and who have come to be known recently as “accidental Americans” -- as a result of the way the U.S. taxes people like me. (See links, below.)

The term “accidental Americans” refers to individuals who acquired U.S. citizenship by accident of birth, but who maintain no ties with America. Many have never lived there beyond babyhood, have neither worked nor studied there, and often have no U.S. social security number. The majority do not even speak English. Some of them left America long before they reached school age.

Because they live in a foreign country and have done so for some time, these accidental Americans pay taxes in these countries, in line with the local legislation. Although they are also required to file income tax returns in the United States because of their U.S. citizenship, and foreign bank account reports, many have not done so because they were not aware they were supposed to, and until the Foreign Account Tax Compliance Act (FATCA) came into force, many did not even know they were U.S. nationals. (Some still don't.)

The American taxation system is, in short, seriously prejudicial against accidental Americans like us, most of whom cannot afford to renounce U.S. citizenship. (The waiver procedure alone costs $2,350, on top of the sums required to comply with Internal Revenue Service rules for the previous five years. This can cost tens or even hundreds of thousands of dollars.)

Since FATCA was passed, during President Obama's term in office, accidental Americans have been denied access to financial services in their current countries of residence, such as being able to open bank accounts, retain bank accounts, take out a mortgage, buy life insurance and contribute to pension schemes in their own country. This is because FATCA requires financial institutions in countries around the world to pass on to the U.S. tax authorities information about their American customers’ bank accounts.

I would add that the problem of citizenship-based taxation and FATCA has been highlighted by Democrats Abroad on many occasions in recent years. Recently, Democrats Abroad provided support to accidental Americans in a public statement.

I ask for your help in finding a solution to these problems, which as I say, are currently being faced by millions of accidental Americans all over the world.

Specifically, we urge you to act to switch from citizenship based taxation to residence based taxation, to find a solution to the problems posed by FATCA and allow those of us who wish to renounce American citizenship to do so through a simple cost-free procedure.

Thank you for your attention to our request.

Representative Zoe Lofgren, Chair of the Subcommittee on Immigration and Citizenship