The U.S. Treasury Department on Wednesday finally published the names of the 687 people who officially "chose to expatriate" during the fourth quarter of 2018, amid questions from some expat lobbying groups as to why the figure was lower than they had been expecting.

Among those questioning the data was the Isaac Brock Society, a Canadian expat American lobbying group, which noted that "anecdotal reports" it had been hearing suggested that renunciations are in fact expanding rather than contracting, which a figure of just 687 would be.

"Many have reported seeing several other people renouncing at the same time as their consulate appointment[s]," the Isaac Brock Society added, in a statement.

"[that is] just not believeable."

If the 687 renunciations figure is correct, it is the lowest quarterly figure in some time, and would bring the 2018 total renunciation number to just 3,983, 22% lower than 2017's 5,133 renunciations, which was itself the first time in five years that the full-year number was actually smaller than the previous year's total.

The data was more than a month late in being published this year, which is thought to have been due to the 35-day U.S. government shutdown that began on Dec. 22, as a result of a disagreement between the U.S. Congress and President Trump over the funding of the federal government. 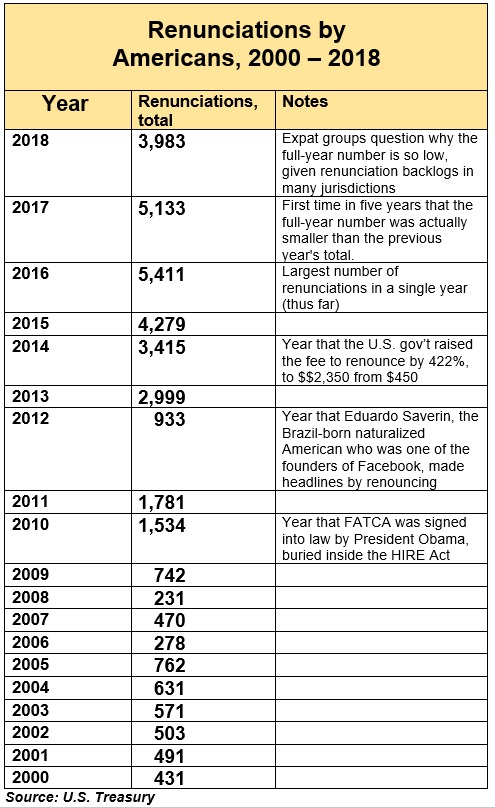 The number of Americans who went through the formal process of renouncing their citizenships was a relatively un-noticed phenomenon until President Obama signed the Foreign Account Tax Compliance Act into law in 2010, and Americans around the world almost immediately found life as expatriates becoming more complicated and expensive, with non-U.S. financial institutions refusing to have them as clients, and the U.S. coming after them for failing to file tax returns or so-called foreign bank account reports (FBARs).

Quarterly publication of the "renunciants" is required by law, however, so by 2012, the financial press had begun to become aware of the growing interest in renunciation. Journalists soon took to scrutinizing the lists in search of famous people, and comparing each quarter's data with that of previous years and quarters.

(2012 was the year when Eduardo Saverin, the Brazilian born naturalized American who was one of the founders of Facebook, made headlines by renouncing, reportedly to simplify his finances rather than to avoid having to pay taxes, although some U.S. lawmakers were reported to be calling for legislation that would have stopped him and others like him from being allowed to re-enter the U.S.) Such legislation in fact already exists, in the form of something called the Reed Amendment, but Saverin's renunciation prompted a call for strengthening the disincentives to renounce for tax avoidance purposes.

Even a 422% increase in the fee charged by the U.S. for citizenship renunciation, to US$2,350, in 2014 – reportedly making it the highest renunciation fee in the world – didn't slow renunciations at first. And today, the number of those renouncing is running consistently at around ten times the 431 who renounced in the year 2000.

In 2016, the name of Britain's former foreign secretary, Boris Johnson, was spotted among the year's renunciants, after he apparently made good on a vow he'd made publicly years before.

As reported here in November, some UK tabloids have suggested that Meghan Markle, the American actress who married Prince Harry last May, will eventually renounce her U.S. citizenship, which many U.S. expat tax and citizenship experts also think could be likely, given the complex financial reporting issues her continued American citizenship would present the Royal Family's tax preparers.

Also questioning the numbers on Wednesday was Toronto-based citizenship lawyer John Richardson, who said: "The published numbers seem surprisingly low, given the pain of attempting to live as a tax-compliant U.S. citizen outside the United States.

"What kind of country does this to its citizens?"

To view the list of people who officially ceased to be Americans in the final three months of 2018, click here.

To read the comments of an 'accidental American' who felt he had no choice but to renounce his U.S. citizenship, but who remains disappointed that the UK doesn't stand up to the U.S. on behalf of its dual U.S./British citizens so they don't have to, click here.