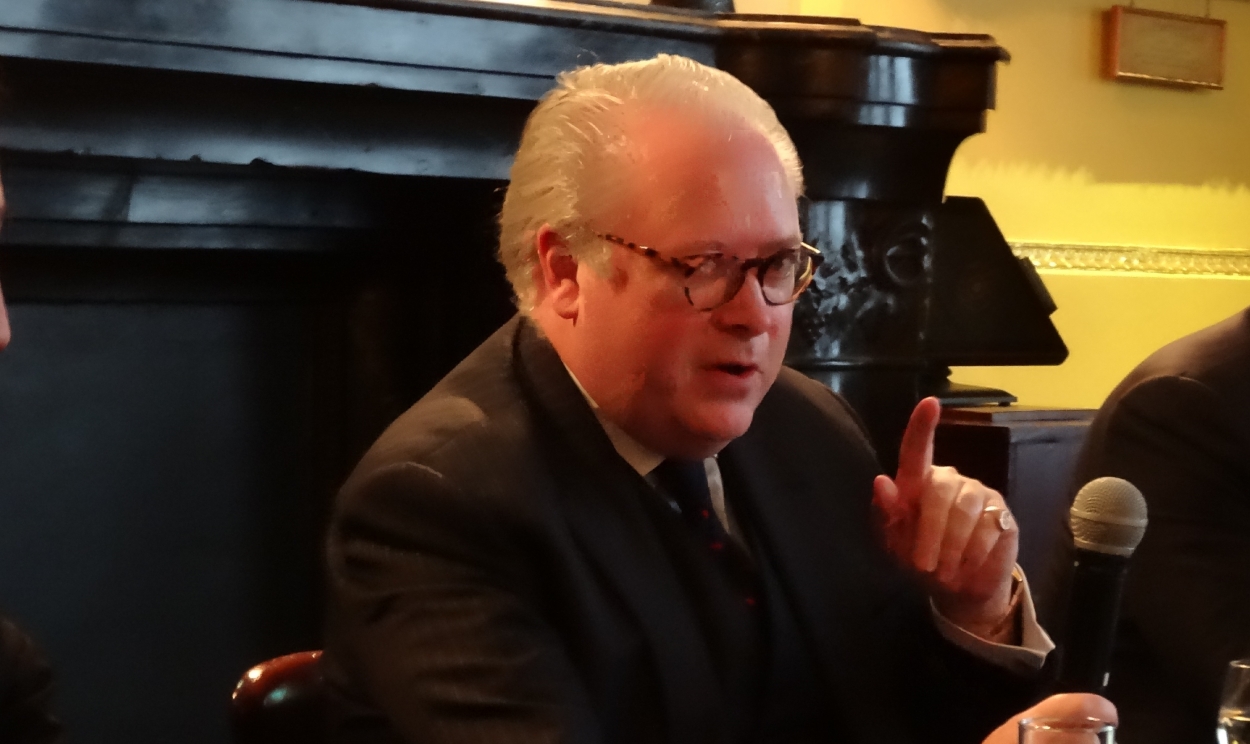 North Carolina representative George Holding told a London gathering of American expats last night that he would press on with his bill aimed at making life easier for Americans living abroad, but stressed that it was unlikely to make much progress without a Democrat co-sponsor.

“And it needs to be someone on the Ways & Means Committee,” Holding, pictured above, a Republican who is a member of that committee, added.

There are 26 Democrats on the committee, including the chairman, Massachusetts Rep. Richard Neal. Five are from California and two from New York, both of which are states that are seen as disproportionately represented overseas, both in terms of individuals and companies.

Holding also told his audience that however obvious it might be to them, and him, that the tax situation for expat Americans urgently needs fixing, “this is not a solution that’s going to come to fruition anytime soon.”

For one thing, in addition to the need to find a Democrat co-sponsor, he said there were legacy issues with some politicians who are still struggling with 2017 tax reform bill’s move to territorial taxation for corporations, and who therefore find it hard “to make the leap of moving to to a residency-based tax system for citizens, as opposed to a citizenship-based worldwide system.”

What’s more, “the bill is not perfect, there are some problems with it, some questions left unanswered.

“But it’s a start. A start that now needs to coalesce behind this idea that citizens should be treated the same as corporations, and shouldn’t be discriminated against [because they live abroad].”

As reported,  Holding’s appearance in London, at a private Mayfair club, was sponsored by the Republicans Overseas UK, in what was billed as a non-partisan event aimed at helping to build cross-party support for his bill. More than 70 people attended the event, including a number of people who said they were neither Democrats nor Republicans, but who were interested in learning more about Holding's bill, and whether it would address some of the tax-related problems they or family members are currently experiencing, or anticipate facing.

Introduced in the final hours of the 2018 legislative session, Holding’s Tax Fairness for Americans Abroad Act will need to be re-introduced to the House if it is ever to be presented to Congress for consideration, which Holding has said he is hoping to do, pending the signing up of a co-sponsor.

'Little appetite for the expat cause'

Asked by an audience member why it was so difficult to find someone to co-sponsor his bill, Holding echoed the comments of others over the years who have sought to explain why Washington lawmakers show little interest in the plight of American expats.

For one thing, Holding said, as many as a third of his fellow Congressmen don't even have passports, suggesting that awareness levels of the issues currently facing these Congressional representatives' overseas constituents, let alone anyone else's, may not be high.

Meanwhile, in addition to a widespread-if-erroneous assumption that Americans who live abroad “are all rich folks, [and possibly] all tax dodgers too…why [else] do they live abroad?” he noted, “there’s no [Congressional] district that has such a high concentration of Americans living abroad that it’s ever going to impact on somebody’s vote total.

“At the end of the day, [other members of Congress] want to know, ‘How am I going to get any more votes for [supporting] this bill?’

Later, again referring to his bill's need for a Democrat to back it, Holding said: “The fact is that this bill will never get hooked onto a ‘must pass’ piece of legislation unless you’ve first got a Democrat buy-in. Because the people who are going to sit in a room to figure out what gets attached to a must-pass bill won’t be in the White House.

“It’ll be [House of Representatives speaker] Nancy Pelosi, [California Rep.] Kevin McCarthy, [Senate majority leader] Mitch McConnell and [Senate minority leader Chuck] Schumer, who will sit in that room and say, ‘okay, this is what we’re going to put into the package.’”

In addition to encouraging his audience to actively lobby their congressional representatives to support his bill, and the cause of expatriate Americans generally, Holding urged them to lobby the companies they worked for as well, since such businesses depend on American expats to look after their interests for them.

And right now, he said, such companies are paying as much as 40% more to hire Americans to work in their overseas outposts than they would typically pay if they hired someone on the ground in such locations, suggesting how much such companies might stand to gain from making life easier, and thus significantly cheaper, for American expats, by passing his bill.

"One of the things I learned from the last tax reform process is that companies are really good at lobbying. They cover the waterfront," he said.

"And it could be important for a variety of companies that a bill like this gets passed, as [it would enable them] to have more U.S. citizens working overseas on their behalf."

Holding began to come to the attention of American expats as long ago as 2017, when it was revealed that he was beginning to look into the drafting of legislation aimed at making life easier for such expats, who have been increasingly finding themselves in the cross-hairs of the U.S. tax authorities.

Holding's interest in the plight of expat Americans stems, he says, from his being married to a British citizen and having spent considerable time with her overseas, which he says has made him more aware than most of his House colleagues about the difficulties Americans abroad are currently facing.

The problems for American expats date back as far as 1970, when the Bank Secrecy Act was signed into law by President Richard Nixon. It was 2010's Foreign Account Tax Compliance Act, though, that has caused the biggest problems, as it prompted banks and other financial institutions around the world, including many in the U.S., to refuse to have American expats as clients.

FATCA also gave the IRS a tool for learning about the existance of American expats who may not have been filing tax returns every year, as they are required to do, under America's extra-territorial, citizenship-based tax regime.

Also appearing with Holding last night were Republicans Overseas vice chairman and chief executive Solomon Yue, and Toronto-based lawyer and citizenship expert John Richardson. As he has in the past, Richardson – an avowed independent who refuses to admit to siding with either the Democrats or Republicans – focused on what he said was the fact that the problems currently being faced by American expats are "not a political issue," and yet are nevertheless failing to be addressed due to "the toxic partisanship of the political environment."

"With Solomon Yue and Representative Holding here, we definitely have the people, we have the tools" for this to change, he added.

Referring to America's citizenship-based tax regime, which is widely acknowledged to be unique in the world, apart from that of Eritrea, Richardson went on: "This is...not a political issue. It is completely beyond me how anybody could describe a law that’s originated – apparently – 150 years ago, when it affected almost nobody, because taxes were so low, how this could possibly be seen as a political issue today."

H.R. 7358, as Holding's bill was known once it was formally submitted last December,  calls for the U.S. to transition to a system that would provide "territoriality for individuals," which would be a form of a residence-based taxation system. Those familiar with Holding's legislation say this would enable Americans to become more competitive in the international job market and freer than they are now to pursue opportunities outside of the U.S.

Under H.R. 7358, "qualified non-resident citizens" would no longer be taxed by the U.S. on their foreign-sourced income while they are resident abroad; however, they would remain subject to tax on their U.S. source income.

Under the legislation, individuals wishing to obtain qualified non-resident citizen status, in order to be eligible for the territorial (residence-based) tax regime would have to be "a nonresident citizen, and make an election to be taxed as such."

Such individuals would be required to make an annual election to certify that they remained in compliance with the eligibility requirements.

The legislation defines a non-resident citizen as someone who is a citizen of the United States; has a "tax home" in a foreign country; and in –  and able to demonstrate that they have been in – full compliance with U.S. income tax laws for the previous three years.

Once an individual meets the qualifications to become a "non-resident citizen", they would, under the legislation, then elect to be taxed as a "qualified non-resident citizen." Those who chose this option would then be exempt from U.S. taxation on – and be able to exclude from their calculation of their gross income for U.S. tax purposes – all of their foreign source income. This would include both foreign earned income (as defined in section 911(b) of the Internal Revenue Code), and foreign un-earned income (defined as "income other than foreign earned income that is sourced outside the U.S.").

Under the proposed legislation, a qualified non-resident citizen would, as noted above, remain subject to U.S. tax on any U.S. source income.

In other words, if an individual were holding a foreign asset – such as a home – prior to their election of qualified nonresident citizen status, and then were to sell this asset once they had become a qualified nonresident citizen, they would still be potentially liable to U.S. tax on the portion of the gain in the asset's value that was attributable to the period prior to their change in tax status.

More in this category: « Andersen Global hits '50-country' milestone as it adds Zambia outpost ‘Tax Fairness for Americans Abroad’ discussion set for May 8 in Athens »