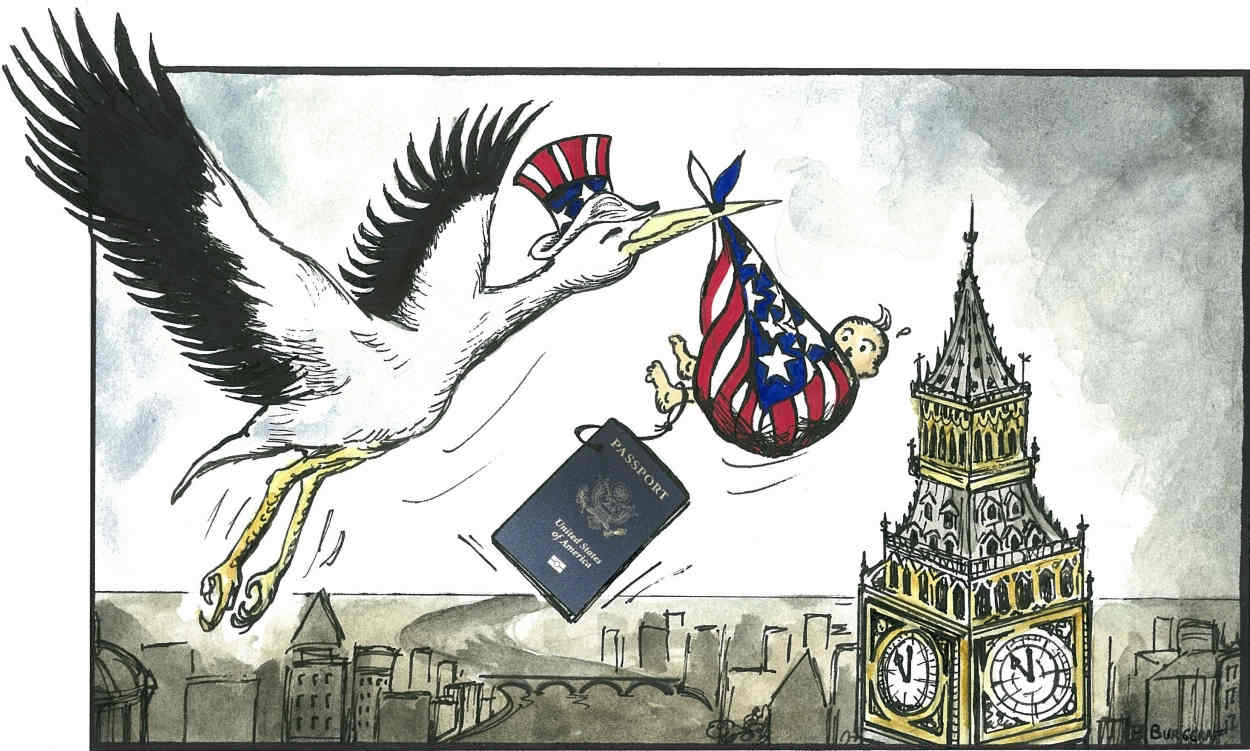 Tax industry professionals readily admit that they can’t recall when the U.S. tax obligations of an unborn baby American ever received anything like the coverage that has been devoted in recent weeks to the as-yet-un-named baby boy who was born a few hours ago to Britain’s Prince Harry and his American wife, Meghan.

However, they also say that anyone who thinks this publicity might result in U.S. lawmakers becoming more sensitive to the hardships the current U.S. tax code places on Americans who live overseas – and thus change the laws accordingly – is likely to be disappointed.

For those haven't heard the news, "Baby Sussex" arrived at 5:26 this morning, British standard time, weighing 7lb 3oz, and both mother and baby are reported to be fine.

Buckingham Palace issued a statement saying that "the Queen, the Duke of Edinburgh, the Prince of Wales, the Duchess of Cornwall, the Duke and Duchess of Cambridge, Lady Jane Fellowes, Lady Sarah McCorquodale and Earl Spencer have been informed and are delighted with the news" of the baby's birth. The child is seventh in line to the throne, and the queen's eighth great-grandchild.

Among those skeptical about whether implicitly negative recent (and potentially continuing) publicity about the potential citizenship and tax obligations likely to be faced by the baby of the Duke and Duchess of Sussex might in any way influence members of the U.S. Congress is Solomon Yue, the Oregon-based vice chairman and chief executive of Republicans Overseas and a long-time campaigner for a more fair tax treatment of expat Americans.

The fact that members of Britain’s royal family are expected to stay out of government matters almost certainly means that Meghan Markle wouldn’t be allowed to speak out on behalf of other Americans abroad on this issue, Yue noted.

Nevertheless, he said, those in expat American tax circles would be interested in learning some of the details of exactly how the Duchess of Sussex is viewed by the Internal Revenue Service; whether, for example, she would be subject to FATCA (Foreign Account Tax Compliance Act) and FBAR (Foreign Bank Account Reports) reporting, both of which would have potential implications for the royal family as a whole.

John Richardson, a Toronto-based lawyer and citizenship expert who is himself a dual American and Canadian citizen, said he thinks the Meghan-and-her-American-baby story will continue to run for some time, as the former actress-turned-royal eventually receives British citizenship, and at that point either does or doesn’t renounce her American citizenship.

“And while I don’t foresee members of Congress rushing to make life easier for a woman who has married into what we may presume to be one of the wealthiest families on the planet, they will, thanks to all this press coverage, remember Meghan and her baby when their expat constituents come to them with their rather more prosaic problems, of the kind I, and others like me, hear about every day.

“American expats who are nearing retirement age, for example, who feel they have no alternative but to renounce their American citizenship, even though it could cost them more than US$10,000 to do so, because they can’t afford to keep paying accountants to do their U.S. taxes every year; and they also can’t afford to return to the U.S. because they can’t afford private health insurance, which they don’t need the countries they live in now, where healthcare is free.”

While Washington lawmakers may find it easy to ignore the details of Meghan Markle and her baby’s citizenship and tax problems, few consumers of newspapers, magazines, news websites and televised news programs have been able to lately.

Beginning last December and continuing on an almost daily basis ever since, print, television and online media organizations as far away as India and Australia have been devoting extensive coverage to the fact that “Baby Sussex” would, when born, be regarded by the U.S. government as American, no matter where in the world he or she emerged on the day. 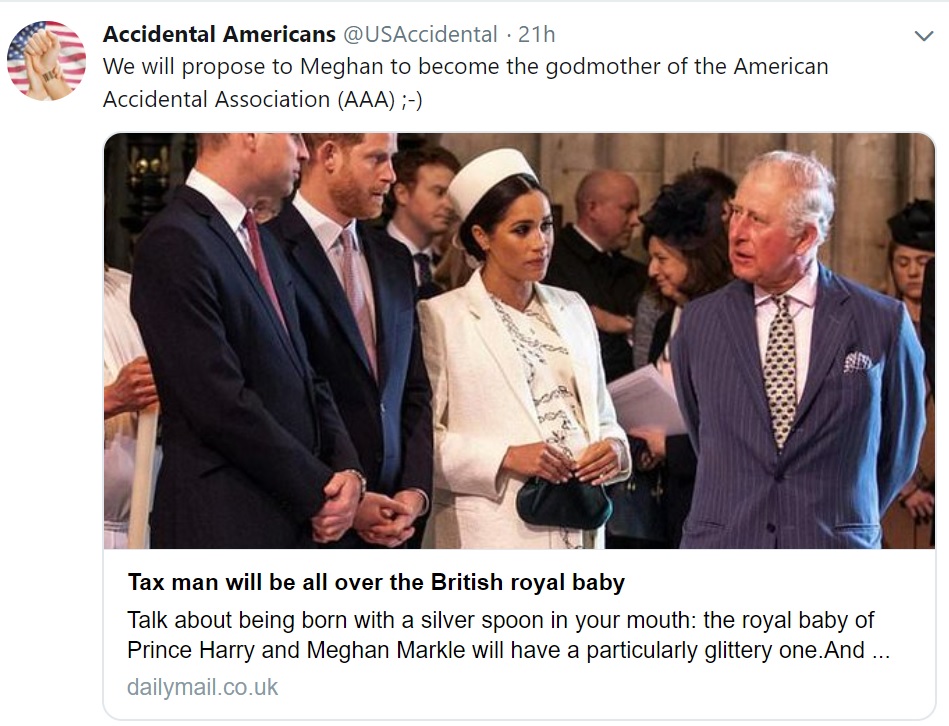 And that as a result, the child could ultimately be required to file tax returns when he or she grew up, like any other American expat, these media organizations have gone on to point out.

Most then have proceeded to quote various tax and citizenship experts on the technicalities the Duke and Duchess of Sussex, their baby and the royal family generally are expected to face, going forward.

Along with major U.S. news outlets like The New York Times, Wall Street Journal and Forbes, such global media organizations as the BBC, CBS, Vogue magazine, CNN, AFP and British tabloids like the Daily Mail, the Sun and The Express have been among the media organizations covering the story – and importantly, they didn’t stop at the question as to whether “Baby Sussex” would have to do anything to lose his or her American citizenship down the line.

Rather, almost all of them then went on to address the potential U.S. tax issues facing Markle and her baby – which, regular readers of such publications would be the first to acknowledge, is not the sort of topic normally covered in articles about celebrities in these mass-circulation publications.

The CNN and AFP stories in particular were picked up by such overseas publications as The Tribune of India and New Indian Express, many of which quoted from a CNN piece that in turn quoted London-based American tax expert David Treitel, of American Tax Returns.

(“When one of the parents is American and has resided in the U.S. for five years with at least two after the age of 14, the baby is automatically a citizen,” Treitel was quoted by CNN, and thus many of these other publications, as saying, adding that this was the case with Markle and her baby, as well as a first for the British royal family.)

Also typical of the coverage of the citizenship and tax issues facing Baby Sussex and its mum was this, from the American broadcast network CBS’s online news website: “Meghan Markle and Prince Harry won't be the only ones with their hands full when their baby arrives later this month — so will the royal tax accountants.

“Thanks to Markle's American citizenship, their firstborn child — who will be seventh in line to the British throne — will automatically become a U.S. citizen, and thus be liable for federal income tax.”

CBS went on to quote international tax lawyer Stuart E. Horwich as saying: “When a child is born a U.S. citizen, they are a U.S. taxpayer irrespective of residency.

"The kid will have to list all foreign bank and financial accounts in which he or she has an interest.”

All of this coverage is – perhaps not surprisingly – a stark contrast to the 1950s, when the American movie star, Grace Kelly, was dating and eventually married Prince Rainier of Monaco. Her U.S. tax obligations didn’t make headlines, although it is widely reported that the eldest of her three children – and the current ruler of Monaco, Prince Albert – renounced his citizenship some years ago.

Nor was anything said at the time about Lisa Halaby’s long-term tax obligations when she married Jordan’s King Hussein in 1978, tax industry sources say, although she too is said to have since renounced.

The difference now, of course, is that even as recently as the late 1970s, many Americans moving overseas often did so without giving so much as a thought to continuing to file tax returns with the U.S. government, and the U.S. government, in turn, rarely came after its expatriates for taxes.

Many date the beginning of the change to the signing of the Foreign Account Tax Compliance Act in 2010, which, combined with the financial damage done to the U.S. government's finances by the global financial crisis two year earlier, gave the IRS means and a motive to systematically target overseas Americans for the first time.

Perhaps not surprisingly, long-term American expats who have been struggling with the hardships that now go with being an American resident abroad – including the difficulties finding banks and financial institutions willing to accept American expat clients, and a complex and occasionally persecutory tax regime – have welcomed the arrival of a celebrity expat, whose tax situation has become a matter for celebrity pages and publications, and whose baby will inevitably become a 'poster child' for the cause of so-called "accidental Americans" from its birth.

Accidental Americans is the term given to describe those American citizens around the world who live as foreign nationals and who typically think of themselves as non-Americans, but who are considered by the U.S. to be American citizens, mainly as a result of having been born there when their parents were passing through.

“We will propose Meghan to become the godmother of the American Accidental Association,” tweeted one such American,

The AAA (also known as the Association des Américains Accidentels) is a Paris-based organization founded two years ago that represents "accidentals." 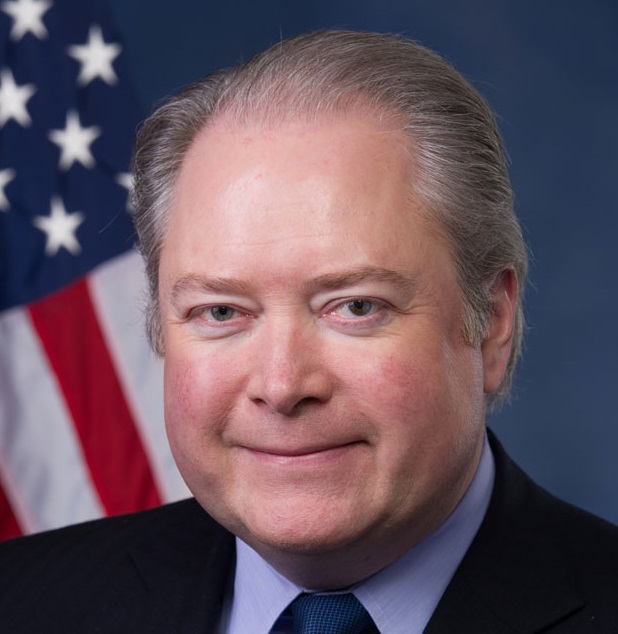 George Holding, pictured left, is an American member of the House of Representatives' Ways & Means Committee, and known to many expat Americans as the sponsor last December of a bill known as the Tax Fairness for Americans Abroad Act. During a recent visit to London, he told the American Expat Financial News Journal that he, too, was sceptical that Washington lawmakers would pay much notice to the publicity surrounding Meghan Markle's baby, and the child's potential tax obligations.

"It's really a narrow issue" as far as most Congressional representatives are concerned, he said, of the problems American expatriates currently face with their tax obligations.

Rather than putting their faith in the power of the gossip columns and celebrity magazines to bring about change in the way U.S. expats are treated, Holding urged such expats to lobby the companies they work for, which he said will be receptive to the argument that the current system is costing them money, and making it expensive for them to send employees abroad.

"Corporations have huge tax lobbies, and once they understand that [changing the way expats are taxed] would be a significant money-saver for them, they'll get onboard," he said.

Below are links to some of the articles about the "bundle of tax hassles"  that the Duke and Duchess of Sussex have, as of oday, at last welcomed into their lives.

More in this category: « ‘Tax Fairness for Americans Abroad’ discussion set for May 8 in Athens Dems Abroad undertaking resi-based tax effort this month »