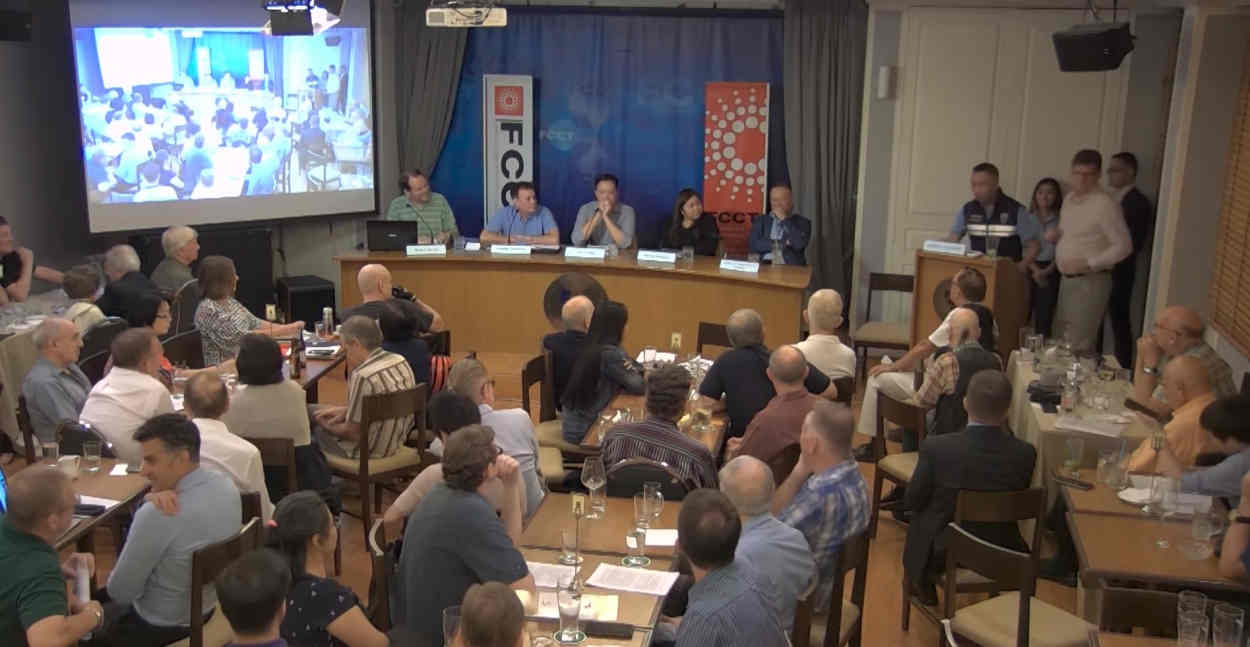 At the Foreign Correspondents Club in Bangkok on Thursday evening

Expatriates resident in Thailand were told by a senior immigration officer on Thursday evening in Bangkok that complying with a controversial immigration regulation known as TM30 should not really be "that hard" – but social media comments afterwards revealed that many of the country's expats remain unconvinced.

The senior immigration officer, named by local media as Thatchapong Sarawannangkul, told a gathering of expats at a panel discussion on the subject of TM30 at the Foreign Correspondents' Club of Thailand said that filing a TM30 was “really not that hard”.

As reported, the TM30 regulation was originally introduced in 1979, but began to became an issue in Thailand earlier this year, when "an abrupt decision by the powers-that-be at the Immigration Bureau," citing heightened terrorism concerns, brought it into force, as the Bangkok Post put it recently. The TM30 is the name for a notification form that Thai landlords and others who provide accommodation to foreigners are now required to use to report these foreigners' presence to the authorities within 24 hours, and every time the foreigner returns.

Also known as Article 37, the regulation in question also requires any foreigner who stays in Thailand to report to immigration whenever they stay at a different address for more than 24 hours,  and then keep the authorities posted if and when they moved around the country.

Foreigners who have permanent residence in Thailand are said to be unaffected.

Also among those participating in Thursday's discussion in addition to Sarawannangkul were the commander of Bangkok's immigration police, Major General Patipat Suban na Ayudhaya; Sebastian Brousseau, of Isaan Lawyers;  and a Thailand-based blogger named Richard Barrow.

A YOuTube video of the Foreign Correspodents' Club discussion began with an introduction of the issues by Barrow, who pointed out that although "we shouldn't really argue" with the Thai authorities if they really fet that enforcing the TM30 requirement was necessary "to safeguard the citizens of Bangkok and the kingdom of thailand," people still wondered "why we need to do a TM30, when there are so many other forms" that expats already need to provide authorities with that include the same information.

Sarawannangkul's response was that said that filing a TM30 was “really not that hard”, as there is a website option and even a mobile app.

Comments posted beneath the YouTube video and on other social media sites revealed that expats resident in Thailand are unconvinced.

"A complete joke, they did not listen to a word," wrote one commentator on the YouTube site.

"If they [the Thai Immigration Service] really cared, the head man would [have been] there instead of making excuses and sending his junior officers."

Said a commentator to an article on the discussion published on ThaiVisa.com, a news website popular among expats: "I have tried to register using the immigration department['s] dedicated website for TM30, and I must say this site is one of the worst and [user-unfriendly] I have ever seen, but after many tries with pop-ups in Thai saying errors, I finally managed to fill up the details, got  a confirmation response that said a user ID and a password will be sent to me soon. This was 2 weeks ago. Repeated calls to 1178 TM30 call center, where no one pick up.

"So, Not so easy, Mr. immigration spokesperson..."

'Unnecessary waste
of time and resources'

Pravit Rojanaphruk, a senior staff writer at KhaosodEnglish.com, a Bangkok-based news website, and long-time observer of the country's political scene, argued in an editorial on Sunday that the TM30 was "an unnecessary waste of time and resources in the name of national security," and it should be made "defunct again before it ends up causing more problems than it solves."

Rojanaphruk pointed out that although the goal of ensuring "the safety of both foreigners and Thais" might well be "noble", expecting foreigners in a country to report to the police "within 48 hours every time you travel to another province for longer than 24 hours" was "amazingly restrictive and burdensome".

"Let us pause for a second," he went on.

"Would a real alien criminal be foolish enough to submit genuine details of their latest whereabouts in order to wait for the Thai immigration police to arrest or deport them? The chances of catching bad guys from the TM30 immigration form are very slim.

"It's the majority of expats in Thailand – the so-called good aliens – who bear the brunt of the inconvenience and feel stifled.

"It's as if Thailand is turning into a police state for largely law-abiding expats."

The result, Rojanaphruk concluded, is that "instead of making [these law-abiding] expats feel welcomed and at home so Thailand can boost its economy and enrich its culture and society, the pedantic TM30 immigration form has alienated hundreds of thousands of law-abiding expats. Mounting damage is growing on a daily basis in the form of increas[ing] numbers considering whether living in Thailand is worth the trouble."

As reported, a group of expats resident in Thailand have posted an online petition that calls on Thailand's Immigration Bureau to scrap the TM30. The petition, which was launched on July 28, now has almost 5,000 signatures.

The Foreign Correspondents Club in Thailand dates back to around 1956 and has some 800 members, around 140 of whom are correspondents or journalists for media organizations. It claims to be "one of the most open and un-exclusive clubs in Bangkok" and is "open to anyone who wishes to join".

Editor's note: This article was updated on August 19th to add the comments of Pravit Rojanaphruk, on the website of KhaosodEnglish.com, which were posted on August 18th.