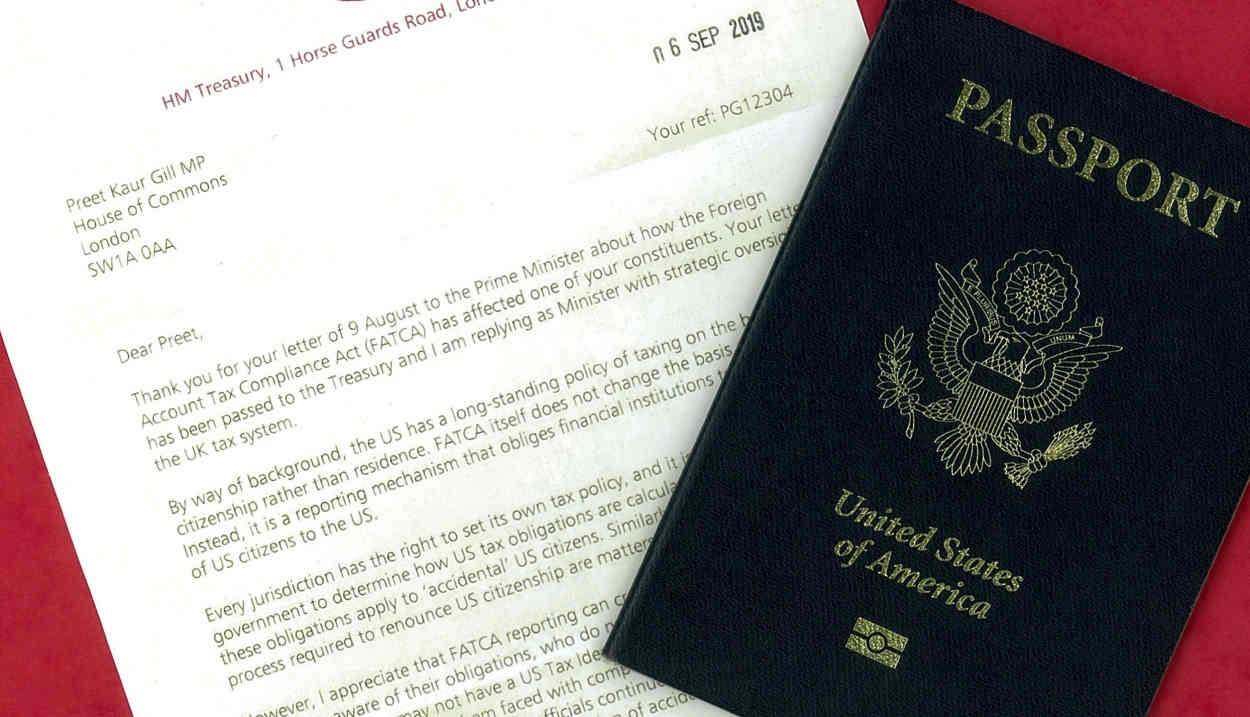 Preet Kaur Gill, the British Labour Party member of Parliament who formally wrote to British Prime Minister Boris Johnson last month on behalf of one of her U.S.-born-but-British constituents to enquire as to his plans with respect to standing up for so-called "accidental Americans" living in Britain, has received a one-page, five-paragraph letter of response, from Treasury minister Jesse Norman, the American Expat Financial News Journal has learned.

Johnson is well known for having himself been an "accidental American," having been born in New York to British parents who returned to the UK soon after he was born, until renouncing his U.S. citizenship in 2016.

In a letter dated Sept. 6, pictured above, Norman said that he did "appreciate that FATCA reporting can create difficulties for those who may not have been aware of their obligations, who do not have a significant connection to the U.S., and therefore may not have a U.S. Tax Identification Number to help ease the reporting," and that "this can leave them faced with complex administrative procedures in light of these challenges."

He added: "UK Government officials continue to engage actively and regularly with their U.S. counterparts regarding the situation of accidental U.S. citizens, in order to seek a solution to this issue."

Norman ended the letter by urging Gill to "pass on my thanks to your constituent for taking the trouble to make us aware of these concerns."

The constituent on whose behalf she wrote her letter, however, told the AXFNJ that it was "once again disappointing to see no support coming from the government for British citizens with no affiliation to the U.S., other than that it happened to be the place they were born."

The constituent, who has asked to remain anonymous, noted that he had been born in the U.S. only because his father, at the time a civil servant with the British Embassy, had been posted there at the time.

"Forcing myself and other accidental Americans into spending large amounts of time and money to become compliant with a foreign country, or risk having our bank accounts closed in the UK, is  incredibly unfair, as we are British citizens, not Americans," he added.

"This situation is being forced upon us by our own government not standing up for the rights of its citizens, and we should continue to push the government, and especially those UK MPs with links of their own to the U.S., to lobby for change."

As a "renounced accidental" pointed out here earlier this year, some 26 British MPs were born abroad, in addition to Johnson. Two Conservative Party MPs, Tobias Ellwood and Greg Hands, were, like Johnson, born in the United States.

This was the latest of several understated responses from UK government officials in response to a question Gill posed on behalf of a UK resident and British "accidental American constituent."

In December, as reported, she wrote to then-Chancellor Philip Hammond, again on behalf of an accidental American in her district, and received a letter eight days later from Conservative MP Mel Stride, who clarified that FATCA hadn't "created" the problems at issue but merely had "created a mechanism for the financial accounts of overseas U.S. citizens to be reported to the U.S.," and didn't specifically say what, if any, discussions the chancellor had had "with his counterpart in the U.S. Department of the Treasury" on the subject of accidental Americans.

Gill followed up that letter with one addressed specifically to Stride, who again responded in what was seen by some in the accidental American community as another understated response.

Stride didn't, for example, address the question many accidental Americans, who have had British passports or the passports of other countries from the time they were infants, typically ask, which is why the country these individuals have grown up thinking they were citizens of, and carry the passports of and pay taxes to, seem willing to hand over to the U.S. tax authorities.

As reported, Gill's letter to Johnson explained to him in detail how her constituent's parents moved him back to the UK "only 10 weeks after he was born," with the result that he has "no connections or affiliations to the U.S.A." And yet because of his American birth, she went on, "he is considered, by America, to be an American citizen," with costly and burdensome, lifelong U.S. tax reporting obligations.

Gill, who headed her letter "Re: Negative financial impact of FATCA legislation," went on to explain to Johnson how her constituent's "extreme concerns over this process of 'automatic citizenship'" on the part of the U.S. were sparked last year, when his bank contacted him as a function of its need to comply with the U.S. Foreign Account Tax Compliance Act, which obliges all foreign financial institutions around the world that have American expat clients to report to the U.S. IRS on these clients' holdings.

"Under this legislation, my constituent is expected to provide an American Social Security number – which he does not possess – or risk having his financial assets frozen.

"In order to resolve this issue, my constituent has to either spend a large amount of time and money registering for a Social Security number, submitting a minimum of 5 years of tax returns (at high cost via a U.S.A.-approved accountant) and continuing the process and cost for life; or paying US$2,350 to 'renounce' a citizenship that he has never wanted or used.

"My constituent rightly feels that it is unfair that he should be forced to pay a few hundred dollars a year to submit tax returns to a country that has no connection to."

Gill's letter didn't specifically address Johnson's own situation, as a recently-renounced U.S.-born British citizen, until the end of her letter, where, in the last paragraph, she said: "My constituent would like you to outline your plans for accidental Americans, as a former 'accidental' yourself. Will you take sympathy with the plight of my constituent and many more that fall into this category, and urge the United States of America to act on this unfair policy?"