©AA Netherlands Meeting of accidental Americans with Dutch lawmakers in the Tweede Kamer, The Hague

Representatives from two American expat organizations that met yesterday with around half a dozen members of the Dutch House of Representatives in the Hague said they believed that their urgent call for government action to deal with the problems of thousands of  bank accounts belonging to "accidental Americans" being closed was at least acknowledged, and the groundwork laid for further discussions.

In particular, they said they have been asked to help lawmakers to prepare for a formal debate in the Dutch Parliament, probably within the next few months, as to what their legal grounds are for insisting that an Intergovernmental Agreement (IGA) that governs the way the Dutch financial institutions are currently providing information to the U.S. authorities on their "American" clients under the Foreign Account Tax Compliance Act is in violation of Dutch law.

As reported, yesterday's meeting came as a growing number of so-called accidental Americans have been reporting their bank accounts are being frozen by Dutch banks over what the banks say are concerns that they may be held liable for FATCA law violations because these clients have failed to provided them with their U.S. Tax Information Numbers (TINs, usually a person's Social Security number) which, as of the end of last month, the banks say FATCA obliges them to share with the IRS.

Although FATCA has been in force across Europe since 2014, a moratorium had existed on the need to provide this information to the IRS until the end of December, 2019.

Because true accidental Americans are actually full-fledged citizens and taxpayers of the countries in which they now live, and in most cases left the U.S. as babies or were even born overseas to one or more U.S. parent and thus never lived in the States, many are reluctant to enter the U.S. tax system simply to obtain a number that their bank says it needs. A major reason for this is because the U.S. taxes on the basis of citizenship, so they would therefore be obliged to file U.S. tax returns for the rest of their lives, and potentially, to pay U.S. taxes in addition to the taxes they're now paying to their own government.

(Many people who would be considered "accidentals" hate and refuse to use the term, arguing that they were "not an accident".)

Meanwhile, an EU-wide law obliges all EU countries to provide bank accounts to EU citizens who wish to have them, a fact the accidentals say is cause enough for the FATCA IGA to be changed, as it applies to them.

As many as 40,000 accidental Americans are estimated to live in the Netherlands, and thus are potentially said to be at risk of having their bank accounts frozen and even closed.

"We were finally taken seriously by [the Dutch members of Parliament], they understand our problems [better] now," Jet Barendregt, a member of the board of the Netherlands Association of Accidental Americans (NLAAA), told The American Expat Financial News Journal this morning.

"But more work needs to be done to get a motion into Parliament for a debate with the Treasury Minister, Wopke Hoekstra."

Specifically, the Dutch lawmakers want more concrete details, including how many and which banks in the Netherlands are involved, and which Dutch laws are being violated as a result of the way the FATCA IGA is currently written, Barendregt said.

Among the banks said to be freezing American accounts are Rabobank, ING, Triodos, SNS Bank, ABN AMRO and Regiobank.

Daan Durlacher, a spokesman for the Americans Overseas – the other American expat organization at yesterday's hearing  – said his group had stressed the need to come up with "short-term solutions" to the problem of bank accounts being frozen, such as getting Dutch and European lawmakers to demand the U.S. issue a statement formally re-introducing the recently-ended moritorium on IRS action against banks for another year or two, alongside calling for a more permanent action, such as the introduction of a "Same Country Exemption" to FATCA provisions.

The Same Country Exemption is an idea that has been proposed for years as a solution to the unintended consequences of FATCA, including by the American Citizens Abroad, the Washingon, D.C.-area based expat lobbying group. It would exempt from FATCA reporting obligations Americans who live in another country but who pay tax in the country in which they currently live.

In addition to advising accidental Americans on their situations and lobbying the government and talking to the press, Americans Overseas is also in the business of helping such individuals to become US-tax-compliant. Durlacher said they began hearing from people who were having their accounts frozen even before Dec. 31, the date when the moritorium that enabled banks not to have to report the TINs of their account-holders ended, and that at a rate of about 10 new cases being reported to them each day, he now estimates there to be more than 1,000 accidental Americans in the Netherlands who are having to manage without access to a bank.

At the same time, he added, the number of such frozen bank accounts in Germany has been growing even more quickly, possibly because "we are, for the moment, the only organization" which is currently helping such individuals, because there are significantly more accidental Americans resident there, and because he appeared on German television to discuss the matter earlier this month, thus calling attention to Americans Overseas' existence. There have also been reports of accounts being frozen in Italy.

"Of the 10 new cases we hear about every day, maybe six are from Germany, now, one is from Belgium and the rest are Dutch," Durlacher reported.

"The liberator from then is the occupier now, not with tanks and artillery, but with economic sanctions," this accidental American, who requested anonymity, said.

At least four Dutch Parliamentarians attended yesterday's hearing: Pieter Omtzigt, Steven van Weyenberg, Bert Snels and Tony Dijck. Helma Lodders, who is said to have shown an interest in the accidentals' cause, had to cancel at the last moment, as did a delegate from the Dutch Banking Association. Also not in attendance was Menno Snel, the former deputy minister of finance, who over the past year had repeatedly sought to get answers from U.S. government officials on behalf of the Netherlands' American/Dutch dual citizens, but who resigned his post in December.

In their defence, the banks argue that the U.S. has failed to reasure them properly that they will not risk being hit with the major sanctions that would accompany any failure on their part to fully comply with FATCA, which not providing Social Security numbers/TINs would represent. As the banks see it, pointing to an updated answer to a "Frequently-asked Question" on the IRS's website, as has been mentioned by some of proof that the IRS would not come after the banks now, is insufficient.

This point was made in the latest of a series of letters to U.S. Treasury Secretary Steven Mnuchin by European Banking Federation chief executive Wim Mijs in November. 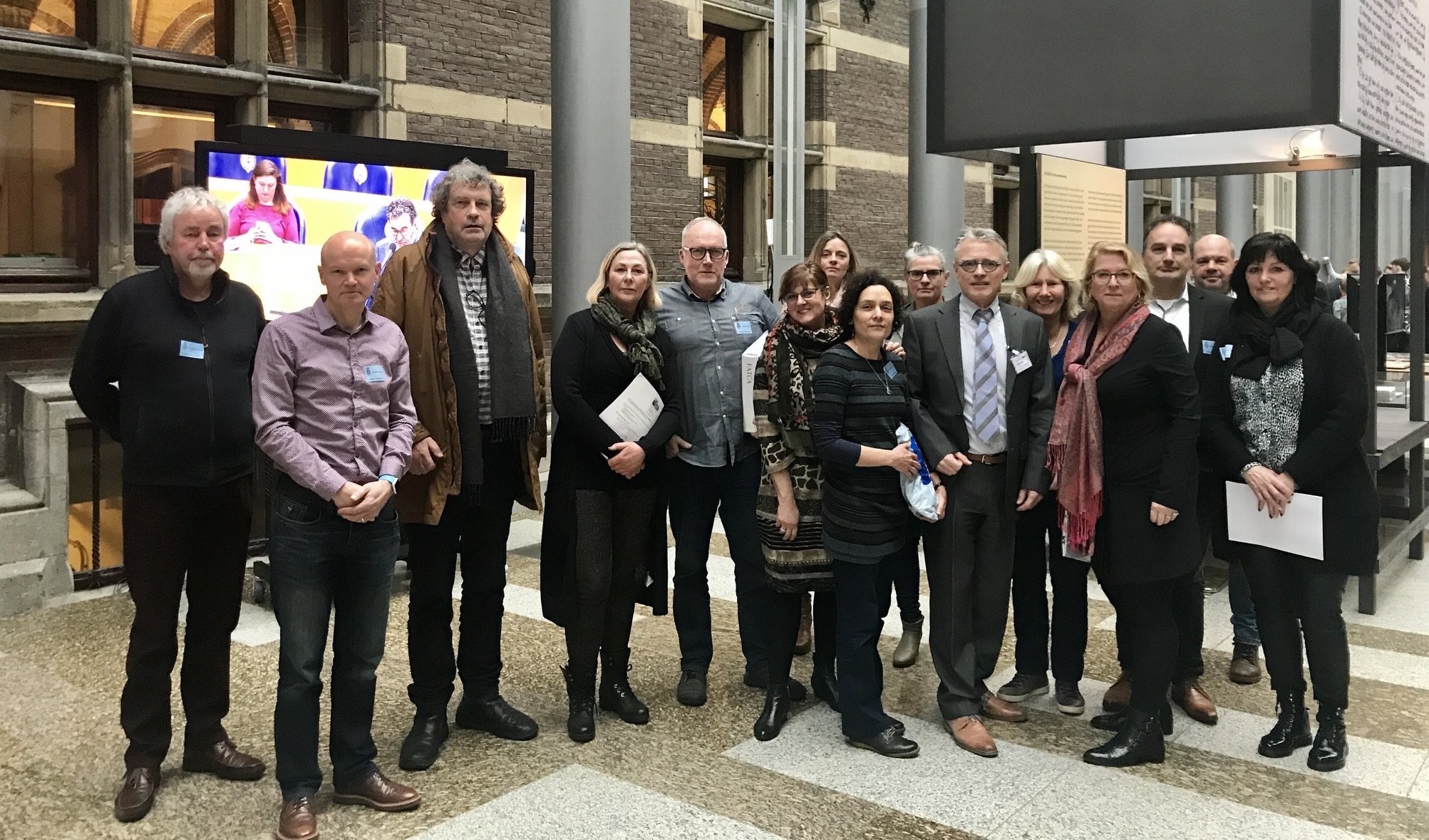 Members of the Netherlands Association of Accidental Americans before yesterday's hearing, outside the Tweede Kamer, The Hague