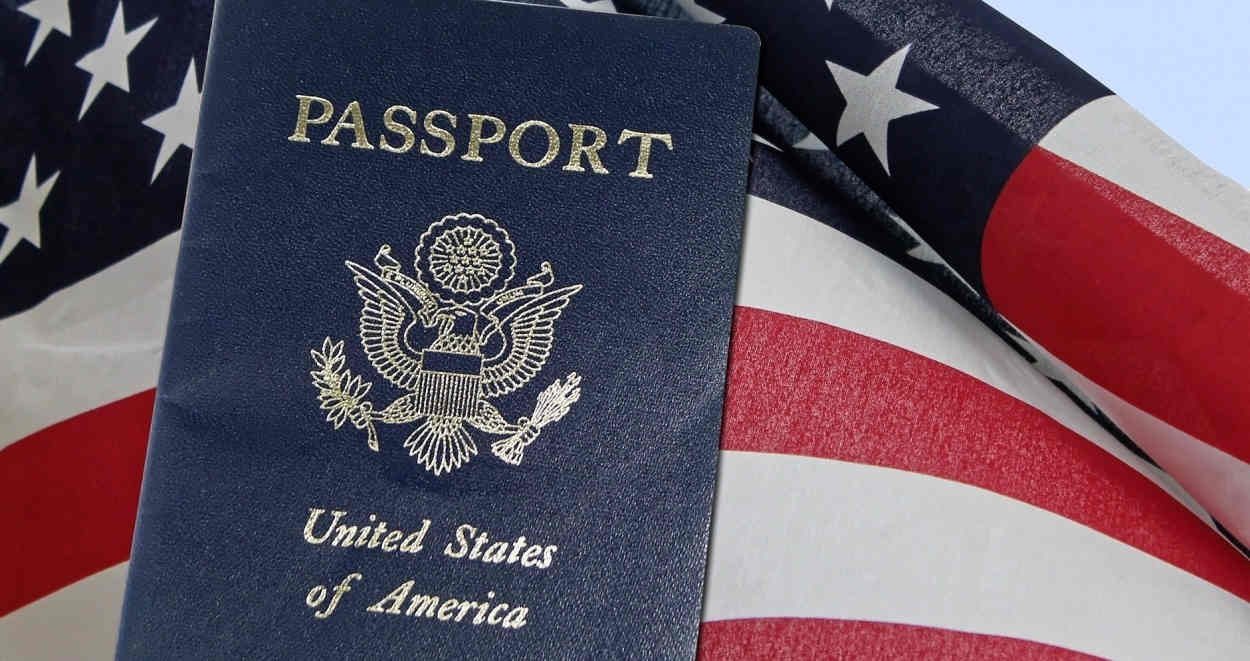 Once again, the number of individuals whose names appeared on the latest U.S. government "Quarterly Publication of Individuals, Who Have Chosen to Expatriate" is being questioned for seeming to contain far fewer names than it should – and in particular, for still not containing the names of certain individuals whose Certificates of Loss of Nationality (CLNs) were issued more than a year ago.

Those questioning the numbers note that the list – which is published every three months on the Federal Register's website, where it may be viewed here – states that it contains "the name of each individual losing U.S. citizenship" during whichever quarter had just ended, and yet, they say, it clearly doesn't.

One recent renunciant whose name wasn't on the list for the third time since she renounced noted that the dramatic drop in renunciation numbers appeared to coincide at least in part with Donald Trump's arrival in the White House. (See table, below.) Trump took office in January, 2017.

Among those whose names weren't on the latest list are Sri Lankan president Gotabaya Rajapaksa, whose American citizenship was an issue during his campaign, and who, as reported, was among those who questioned why his name wasn't on the Q2 list, published last August.

Rajapaksa, a former Secretary to Sri Lanka's Defence Ministry and a retired Sri Lanka Army officer, was said to have picked up his American citizenship while in the U.S. in 2003.

Nor was Canadian politician Andrew Scheer's name on the latest "Quarterly Publication". He too has faced questions in his country  about his possible dual loyalties, as a result of having inherited American citizenship from his father.

Yet another former American whose name wasn't on the latest list – again – told the American Expat Financial News Journal that even though she renounced in December 2018 and her CLN was dated January 2019. 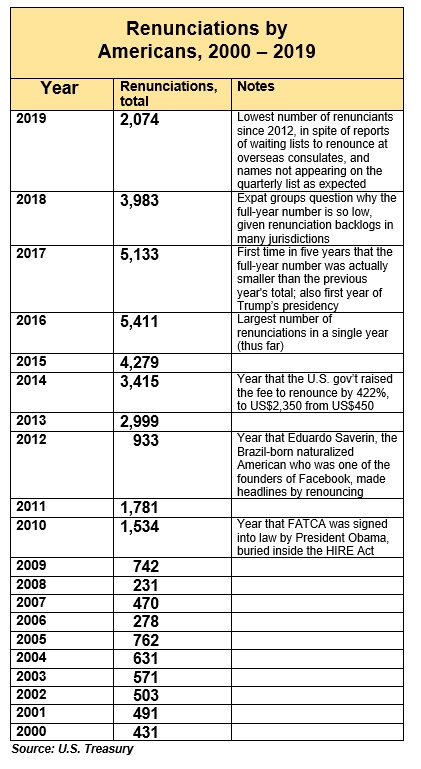 "This latest list is ridiculously short," this former American, who is now British and who requested anonymity, added.

"I find it stunning that not only is the U.S. government essentially forcing people to renounce, but they are also openly lying about who is renouncing and when.

"If they are going to publish a supposedly public list, then surely it needs to be accurate.

"If we or our banks make a reporting mistake, we get destroyed, but, it seems, the U.S. government can brazenly publish inaccurate lists with impunity several times a year."

IRS and Treasury officials didn't immediately respond to a request for comment on the matter.

However, in November, a spokesperson for the Internal Revenue Service played down the significance of the quarter-to-quarter fluctuations in the renunciation data, standing by a previous IRS statement that "we cannot publish the names in the Federal Register until we receive the information needed to make a determination of the expatriation".

Also in November, this publication quoted a London-based lawyer with the U.S.-headquartered law firm Butler Snow LLP, which has offices in Europe and Asia as well as the U.S., who  firmly cautioned against reading too much into the Federal Register data.

He noted that it had "never been an accurate snapshot of expatriates", and that "some individuals' names never show up, and some, or even most, appear later than would be expected".

This point was also made in an article published on the Canadian Isaac Brock Society blog in February 2017, which noted, even then, that the list had been seen to be "slow to include names" of those who had recently renounced.

"For example, Rachel Heller, who renounced all the way back in November 2015, didn’t show up until this quarter," the article said, while "Brockers [Isaac Brock Society readers and contributors] who gave up citizenship as recently as August of last year did get their names published, but Japanese politician Kimi Onoda, who renounced in October 2016, is not included in the current list."

As this and other media organizations have been reporting for years, the number of Americans who went through the formal process of renouncing their citizenships was a relatively un-noticed phenomenon until President Obama signed the Foreign Account Tax Compliance Act into law in 2010, and Americans around the world almost immediately began to find their life as expatriates becoming more complicated and expensive.

After the law was signed but even before it came into force, American expats began hearing from their local banks and other non-U.S. financial institutions that they were no longer welcome as clients, and other institutions wouldn't accept them either. On top of this, many found themselves in trouble for failing to file tax returns and/or so-called foreign bank account reports (FBARs), which they didn't previously realize they had been expected to do.

Even a 422% increase in the fee charged by the U.S. for citizenship renunciation, to US$2,350, in 2014 – reportedly making it the highest renunciation fee in the world – didn't slow renunciations at first, at least to judge by the quarterly Federal Register data.

Because however poor a tally of current renunciation trends the Federal Register lists may be, after FATCA was signed into law, the numbers began to dramatically increase.

And since quarterly publication of the "renunciants" is required by law, American expat groups, journalists and renunciation experts soon began to focus on these lists, not only to see how the latest quarter's data compared with that of previous years and quarters, but also to see if any famous people had given up their citizenship, or, as noted above, whether the names of any famous people who had claimed to have renounced had at last appeared.

In 2016, for example, the name of Britain's former foreign secretary, Boris Johnson, was spotted among the year's renunciants, after he apparently made good on a vow to renounce that he'd made publicly years before. 2012 was the year when Eduardo Saverin, a Brazil-born naturalized American who was one of the founders of Facebook, made headlines by renouncing, reportedly to simplify his finances rather than to avoid having to pay taxes. 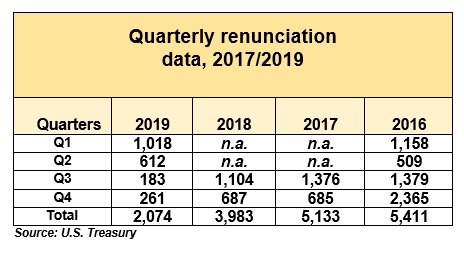