Under attack at home and abroad for the problems American taxpayers have been encountering as they struggle to use an online IRS tool to obtain the relief payments promised to them by the government's recently-enacted CARES Act stimulus package, the Internal Revenue Service has announced what it called "significant enhancements" to the feature.

In a statement, the IRS said it had begun enhancing the online "Get My Payment" program last week, and that it had continued to do so "through the weekend", as it "adjusted several items related to the online tool" that first went live on April 15.

The statement didn't mention whether the enhancements included facilities that might make it easier for Americans resident overseas, with overseas postal addresses and non-U.S. bank accounts, to use the Get My Payment tool.

As reported, the American Citizens Abroad on Friday wrote to U.S. Treasury Secretary Steven Mnuchin and IRS Commissioner Charles Rettig to urge them to address the specific problems expatriate Americans have been having with the new IRS tool, which it said have included difficulties having to do with online forms that have proven unable to accommodate non-U.S. addresses and non-U.S. bank accounts. 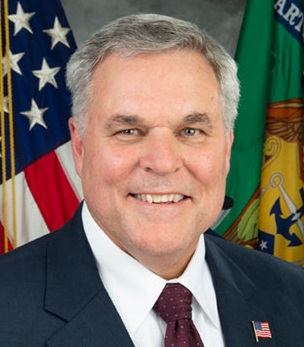 In the IRS's statement today, IRS Commissioner Rettig, pictured left, firmly defended thenew IRS tool, saying that the tax agency had "delivered Get My Payment" to Americans, "with new capabilities that did not exist during any similar relief program, including the ability to receive direct deposit information that accelerates payments to millions of people."

He added: "These further enhancements will help even more taxpayers. We urge people who haven’t received a payment date yet to visit Get My Payment again for the latest information.

"IRS teams worked long hours to deliver Get My Payment in record time, and we will continue to make improvements to help Americans."

Those wishing to use the Get My Payment tool are instructed to visit https://www.irs.gov/coronavirus/get-my-payment, ideally with a copy of their most recent tax return to hand, along with their U.S. bank account details, if they have one.

Among the details they should expect to be asked to provide are their Social Security number, date of birth, and the mailing address used on their most recent tax return.

A Spanish version of the Get My Payment tool, the IRS said, is expected to be introduced "in a few weeks".

The IRS reminded those applying for their Economic Impact Payments, or EIPs, to be wary of scammers, who have already been taking advantage of the system to apply for and intercept money before those who are entitled to receive it have had a chance to put in claim. With respect to such scammers, the IRS urged U.S. taxpayers to keep an eye out for scammers "using email, phone calls or texts related to the payments".

"Be careful and cautious: The IRS will not send unsolicited electronic communications asking people to open attachments, visit a website or share personal or financial information.

"Remember, go directly and solely to IRS.gov for official information."

The IRS concluded its update by noting that it will be posting new answers on its IRS.gov/coronavirus frequently-asked-questions page, and will otherwise be providing further updates "as soon as they are available".

Americans to receive as much as US$1,200

As reported, the US$2trn CARES Act stimulus package has been set up to provide as much as US$1,200 per U.S. citizen or Green Card holder, with $500 for dependent children aged 17 or under. It was conceived and signed into law last month as part of Washington's efforts to help the American economy recover from the devastating effects of the global Coronavirus pandemic.

Although there were concerns at first that Americans resident outside of the U.S. might not be included in the program, in the end, they were, which some sources said was the result of some "last-minute advocacy" on the part of pro-expat lobbyists.