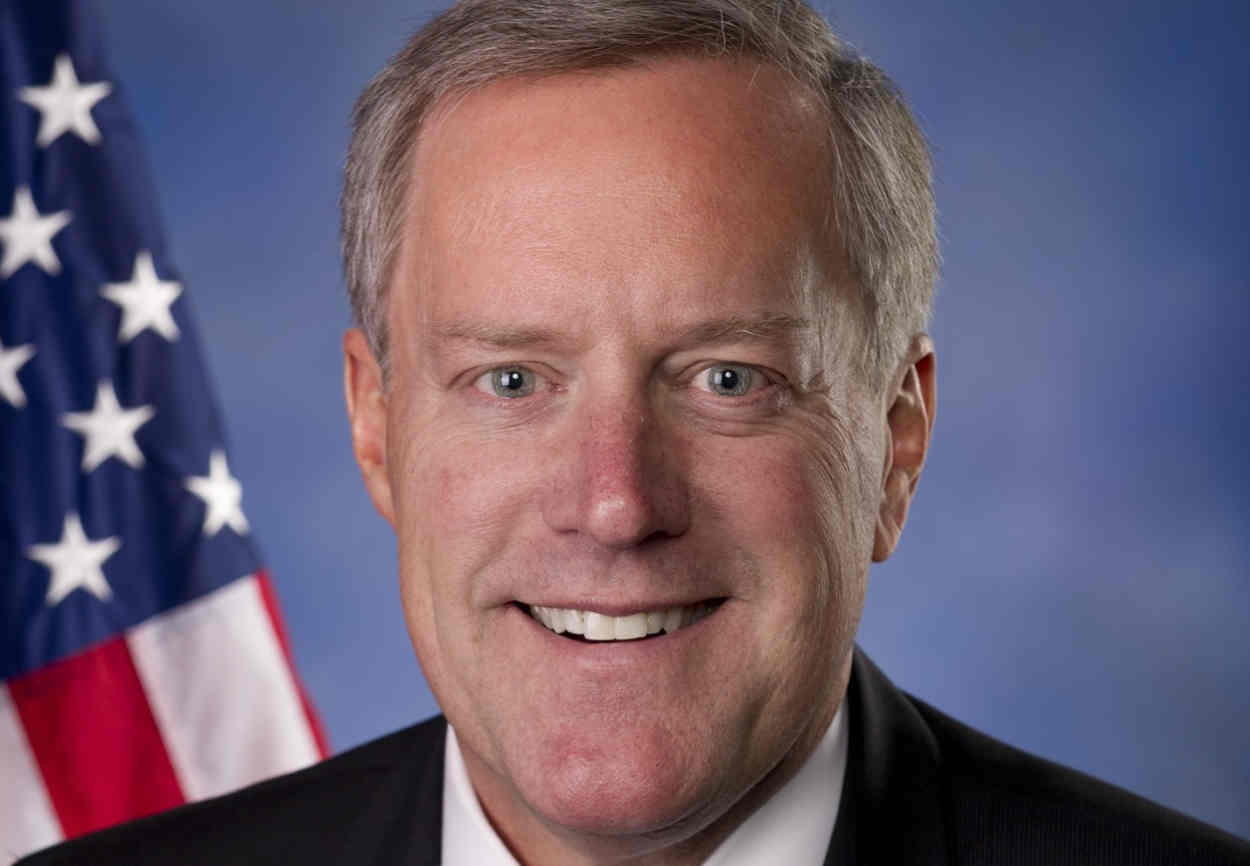 In what many American expats will hope could at last bring expat issues onto the agenda in the final weeks of the U.S. presidential campaign, the Republicans Overseas has asked White House chief of staff Mark Meadows to call on President Trump to use his authority, as president, to begin to make some of the changes these expats have long been calling for, but which Congress has failed to address.

In a letter dated Sept.1 (Tuesday) and apparently hand-delivered to the White House, the Republicans Overseas urged Meadows – a Republican Party stalwart who is a well-known opponent of FATCA – to ask the president to issue executive orders that, among other things, would "exempt overseas small businesses from having to comply with the Transition Tax and GILTI tax", which were contained in Trump's 2017 Tax Cuts and Jobs Act, and "create a commission on Americans overseas to investigate the burdens caused by citizenship-based taxation and onerous regulation".

"America is one of only two nations that taxes its citizens based on citizenship (the other being Eritrea)", the six-page letter continues.

The letter begins by reminding Meadows of a discussion the Republicans Overseas had had with him, at the 2016 Republican National Convention in Ohio, in which the RO members had called the then-lawmaker's attention to "the plight of more than 9 million Americans living overseas who are being harmed by the consequences of the Foreign Account Tax Compliance Act, implemented during the Obama-Biden Administration".

"This statute has caused immeasurable harm to loyal American citizens residing abroad, as you learned during the landmark hearings that you organized as Chairman of the House Subcommittee on Government Operations in April 2017," the letter continues.

"Today, overseas Americans are not only seeing their lives embittered by FATCA, but as an unintended result of the President's Tax Cuts and Jobs Act of 2017, they find themselves subject to new taxes and an even more onerous set of compliance obligations." This is a reference to certain provisions aimed at large American companies with overseas operations – the so-called Transition Tax and GILTI (global intangible low-taxed income) provision – which have had harsh, presumably unintended consequences for many Americans with small, overseas businesses.

The letter goes on to address in depth the problems American expats are currently struggling with, including difficulties accessing "basic financial services and retirement plans" abroad, and then details how the Trump administration could address these problems without having to attempt to do so by engaging Congress, which has never managed to progress any pro-expat legislation since FATCA was signed into law in 2010.

It also notes that U.S. citizenship renunciations have soared in recent years as a result of the struggles expats are facing.

The last three pages of the letter consist of two appendices that spell out how a "Draft executive order on Promoting the American Economy Abroad and Granting Relief to Overseas Americans" and "Ending Citizenship-Based Taxation Through Treasury Regulations" could be done.

The letter may be viewed in its entirety on the Republicans Overseas website by clicking here.

As reported, while serving in Congress for North Carolina's 11th district from 2013 until earlier this year, Meadows introduced a bill aimed at repealing key elements of FATCA in 2016. The Republicans Overseas had welcomed his appointment as Trump's chief of staff earlier this year because they said they believed it might enable their voices to be heard more clearly by Republican policy-makers in the lead-up to this November's election.

However, until now, neither the Democratic Party nor the Republicans have made any effort to woo expat voters in their election campaigning.

The Democratic Party declined to adopt in its pre-election platform any of the Democrats Abroad's policy recommendations, including its call for replacing the problematic U.S. citizenship-based tax regime with one based on residency. The Republican Party, meanwhile, said it would simply adopt for 2020 its 2016 platform, meaning that it continued to call for FATCA's "repeal, and for a change to residency-based taxation for U.S. citizens overseas", (on page 13 of the 66-page document) – but this meant that it also is seen as having made no progress in these supposedly-key policy areas despite having held the White House for almost four years.

One Republican Congressman, North Carolina Rep. George Holding, did introduce and attempt to find support for a bill aimed at helping American expats – his so-called Tax Fairness for Americans Abroad Act, unveiled in the final days of the 2018 legislative session – but failed to win any Democratic Party support, and he's now about to leave office after his district was redrawn.

The Biden campaign was asked for a comment, but as yet has not responded, nor has anyone from the Democrats Abroad, which represents members of the American Democratic Party overseas.

RO CEO ad VP Yue, pictured left, told the American Expat Financial News Journal on Saturday that Trump chief of staff Meadows was "a huge supporter of overseas Americans", as evidenced by the fact that while serving in Congress, he "not only introduced legislation to repeal FATCA but also held a House subcommittee hearing on FATCA, and how it damages overseas Americans."

"Naturally, we are asking for his help again," he added.

The American Citizens Abroad has been advocating on behalf of American expats since 1978, originally out of Geneva, and since 2012, from the Washington, D.C. area. One of its most visible campaigns, launched a year ago, basically consisted of a call for expats around the world to urge their Congressional lawmakers to hold hearings on the various tax issues that American expats struggle with. According to ACA, more than 15,000 expats are known to have responded to the campaign thus far, and the organization has said it has had a "good response/support" from the lawmakers on the receiving end of these messages.

Asked for the ACA's reaction to news of the Republicans Overseas' letter to Mark Meadows, executive director Marylouise Serrato told the AXFNJ that the ACA "is always encouraged to see efforts by both the Republican and Democratic overseas organizations, to raise the issues of Americans overseas with their leadership.

"It is important that both parties understand the issues facing the community," she added. "And this is why bi-partisan hearings are so necessary."

John Richardson, a Toronto-based American citizenship lawyer and expat advocacy campaigner, said it was "about time" someone in Washington explored ways of addressing the severe issues that America's expats struggle with that didn't require the approval of both houses of Congress, particularly now that they are so polarized and unwilling to work together.

"There are numerous areas in the Internal Revenue Code that would either allow or mandate the U.S. Treasury to make regulations directing how various sections of the IRC are to apply," he said.

"In other words, although Congress could conceivably solve the problems faced by Americans abroad, it is not the only option."

Richardson added: "I applaud the Republicans Overseas for taking this important initiative which, if successful, would solve many of the problems currently inflicted on Americans abroad by their government."

American expat groups will be hoping the fact that there are an estimated 9 million Americans resident overseas, of whom around 6.5 million are believed to be eligible to vote, will now at last begin to be recognized by both parties as election day nears. The overseas voting bloc is often said to theoretically represent a population greater than of all but the 10 largest U.S. states.

Traditionally, though, American expats have tended not to vote in large numbers.

As former U.S. ambassador to Canada Bruce A. Heyman noted in a recent appearance on MSNBC's morning news broadcast, only 5.3% of the estimated 622,492 American citizens living in Canada who were eligible to vote in the 2016 U.S. presidential election actually cast a ballot.

Spokespeople for American expat groups say expats are disinclined to vote because they don't feel their votes are valued, as they are spread out across the fifty states in which they lived before moving abroad.

The fact that the candidates for president haven't made an effort to reach out to them, or address their issues, is also cited as a reason many expats have traditionally avoided casting a ballot, along with, in some cases, concern that voting could cause the U.S. tax authorities to come after them, even though experts say the IRS can't access voting registers.