The struggles being faced by so-called accidental Americans, who are being told that they risk losing their bank accounts in the countries in which they live and are citizens, unless they formalize or take steps to renounce their U.S. citizenship – which they only recently discovered they are deemed to possess – has been covered by a Washington Post journalist.

The fact that an article on the subject of accidental Americans and their struggles to maintain their non-U.S. bank accounts has appeared on the website of the hometown newspaper of Congress and the White House was met with cheers on Tuesday from accidental Americans in Europe, as well as others who have been calling for changes in the way the U.S. taxes those of its citizens who live outside of its borders. They said they were hopeful that it meant Washington's lawmakers might finally realize the scale of the problems they're facing. 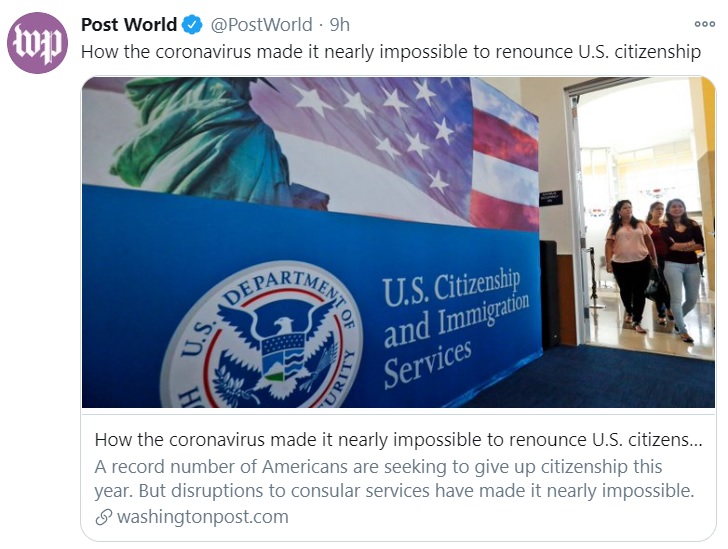 Many of them took to Twitter and Facebook to post links to the story throughout the day on Tuesday, beginning almost as soon as it appeared (around 2pm London time).

The story, which is around 800 words long, is headlined "How the coronavirus made it nearly impossible to renounce U.S. citizenship", and addresses the specific problem many so-called "accidentals" have been having since the end of last year, when their banks have made it known that if they don't either provide a Tax Identification Number (TIN), usually a Social Security number, or be able to show proof that they've begun proceedings to give up their U.S. citizenship (or have done so), they stand to lose their bank accounts.

The problem, the article points out, is that whether those getting these warnings from their banks want to get a Social Security number or to begin the process of renouncing, neither has been possible for months, because the U.S. has suspended the provision of such services at almost all of its overseas outposts.

Adam Taylor, the Washington Post journalist who wrote the story – and who is himself originally from England –  describes how a 59-year-old nursing assistant named Aline, who lives in Bayonne, France, was unable to get either the U.S. Embassy in Paris "nor [any] other U.S. consulates in France" to process her request to renounce, after her bank warned her in February that it would close her account if she failed to provide it with a SS#, which she also found impossible to do.

"Aline is not alone" in thinking that the U.S. administration is "doing everything to prevent us from renouncing", Taylor continues.

Although "U.S. government data suggest that a record number of Americans are seeking to give up citizenship this year...disruptions to consular services around the world have made it nearly  impossible for some Americans to stop being American."

And while a State Department official is quoted as telling Taylor that the department has now begun a "phased resumption of routine consular services", for many people struggling in financial limbo, "that may be too little, too late," Taylor notes.

Among those he interviewed in addition to various individuals, and the unidentified State Department official, were Fabien Lehagre, head of the Paris-based Accidental Americans Association, and Daan Durlacher, the Netherlands-born, U.S.-citizen founder of Americans Overseas, an organization based in the Netherlands that campaigns on behalf of accidental Americans there and elsewhere in Europe while also helping such individuals to sort out their situations, sometimes in exchange for a fee.

One of the most-visible campaigners in Europe's American and accidental American community is a U.S.-born British woman who prefers to be known simply as "Jenny", as that's the name she's been using to challenge the way the UK has been sending her personal information to the U.S. in compliance with FATCA, the same anti-tax evasion law that is obliging non-U.S. financial institutions to provide the tax information details of all their American citizen and Green Card-holding account-holders, and thus causing the problems reported in the Washington Post article.

Jenny told the American Expat Financial News Journal that she sees the fact that the people interviewed in the article believe they need to go through the process of renunciation in order to keep their bank accounts, in the countries in which they are citizens and taxpayers, as a violation of their data protection and privacy rights as well.

“None of this would be happening if our fundamental rights were not being breached by FATCA," she added.

"If the authorities had thought about data protection, this would not be a problem."

As reported, both the Washington, DC-area-based American Citizens Abroad advocacy group and the Paris-based Accidental Americans Association wrote letters in the past ten days to various U.S. authorities urging them to restore "essential services" needed by Americans overseas, citing, among other things, the difficulties such expats are having in being able to get Social Security numbers and to make the appointments necessary to renounce citizenships.

In his letter to U.S. Ambassador to France Jamie McCourt, AAA president Fabien Lehagre suggested that the U.S. State Department seemed to be intentionally seeking to limit renunciations, noting that although the U.S.'s renunciation services and Federal Benefits Unit in France had been closed "for more than seven months..allegedly because of the Covid-19 pandemic, all the other services of your embassy have remained open".

He added: "The closures mean that French 'accidental Americans' suffer a double penalty and find themselves in an inextricable situation. They cannot apply either for an SSN or renunciation of their U.S. Citizenship in order to obtain a Certificate of Loss of [Nationality], (CLN), as demanded by their banks."

More in this category: « French Accidentals Ass'n asks U.S. Ambassador to re-enable renunciation services in France Survey finds 16% of Americans 'would consider' leaving if 'their' candidate loses, up from 9% in 2016 »