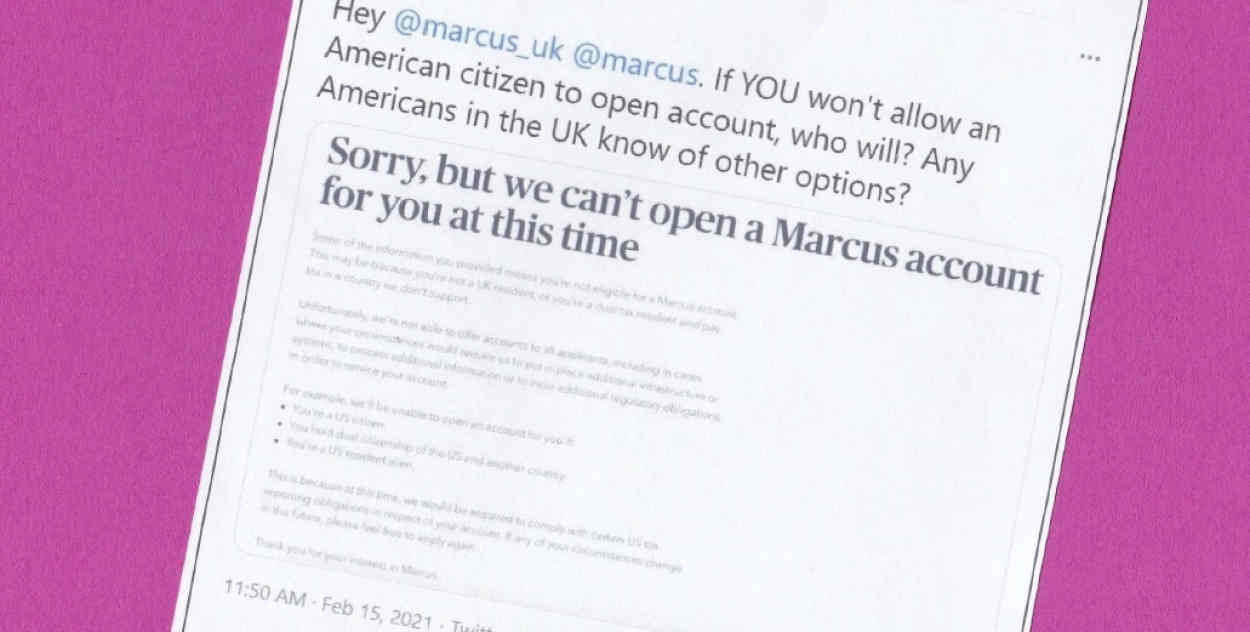 More than a year after it first admitted that it couldn't offer its Marcus-branded services to Americans resident outside of the U.S., Goldman Sachs says it still can't accept them, citing the problems of having to comply with the U.S. tax evasion law known as FATCA.

The UK is the only country outside of the U.S. where the Marcus range is currently being marketed.

American expat sources said they weren't surprised to hear that Goldman Sachs was struggling to find a way to make its product FATCA compliant, as the challenge has eluded many other companies as well, apart from at the high end of the market, where the added costs of providing FATCA-compliant investment offerings can more easily be passed on to the client.

A spokesperson for the giant New York-based banking group confirmed that this inability to accept American clients continues to exist, in response to a questions prompted by a recent tweet that has been making the rounds in the UK since Feb. 15.

In that tweet (pictured above), an American expat resident in the UK named "Nina" posted a response she'd received when she'd sought to open a Marcus account.

"Hey @marcus_uk @marcus," she wrote. "If YOU won't allow an American citizen to open an account, who will? Any Americans in the UK know of other options?"

Marcus is an online banking service for ordinary savers. It was first launched in the U.S. in 2016, where it grew to hold more than US$20bn in savings, and it began its rollout in the UK in September, 2018.

According to promotional literature, it enables British savers to open an account with as little as £1, and to access competitive interest rates.

However, as reported here last January, the company said that at that point it was "unable to support customers subject to FATCA information reporting or to provide the required 1099 statement, due to the additional infrastructure required to comply with these tax regulations."

Then, in June of 2020, its UK operation was forced to close to new customers – even non-Americans – reportedly in response to a surge in demand.

Earlier this month, however, it reopened, with a 0.5% interest rates, nearly double the rate of some other easy-access accounts on the market. But American expats are still being told they're not welcome, because of FATCA.

The Marcus by Goldman Sachs spokesperson said it wasn't known when this situation is likely to change.

"Sorry, but we can't open a Marcus account for you at this time," is the response Nina received when she attempted to apply for an account.

"Unfortunately, we're not able to offer accounts to all applicants, including in cases where your circumstances would require us to put in place additional infrastructure or systems, to process additional information or to incur additional regulatory obligations in order to service your account.

"For example, we'll be unable to open an account for you if:

"This is because at this time, we would be required to comply with certain U.S. tax reporting obligations in respect of your account."

As noted above, in shunning American clients, particularly with a product aimed at ordinary investors – where low costs and the highest interest rates possible on savings accounts will be seen to matter – Goldman Sachs is not alone.

As reported here in October 2019, for example, Paris-based Boursorama Banque, an online-only banking division of Société Générale, the French banking group, drew the ire of the Paris-based Association of Accidental Americans because it also would not allow American expats to have accounts, even though it had begun running advertisements for the brand that featured the American actor, Brad Pitt.

Also in 2019, Tom Sheridan, the brains behind a new investment offering exclusively designed for Amerian expats in the UK being unveiled by London-based wealth manager Seven Investment Management (7IM), which company had co-founded and just retired from after 17 years at its helm, explained how painstakingly-difficult it was to put the product together – and how he was uniquely qualified to do this, because of the fact that he was himself American.

As he told the American Expat Financial News Journal at the time, he was, therefore, only too familiar with “the plight of Americans living outside the United States, for whom doing very basic things in the financial services world, for yourself and your family, is sometimes hard.”

Later, he explained: “I did it because I understand the problems, because I file my own tax returns every year.

“I got to the point where I said, ‘You know what? Before I die, I’m gonna fix that!’

For her part, Nina says she's discouraged to discover that even American companies struggle to accommodate American expat savers abroad.

"I’ve been here [in the UK] for six years now, and I became interested in this Marcus product specifically because I thought, being from a major U.S. company like Goldman Sachs, they actually would be more friendly to Americans than other product providers on the market. In fact, I was thrilled when I saw they were coming to the UK – only to be disappointed last week when they said that I couldn't sign up."