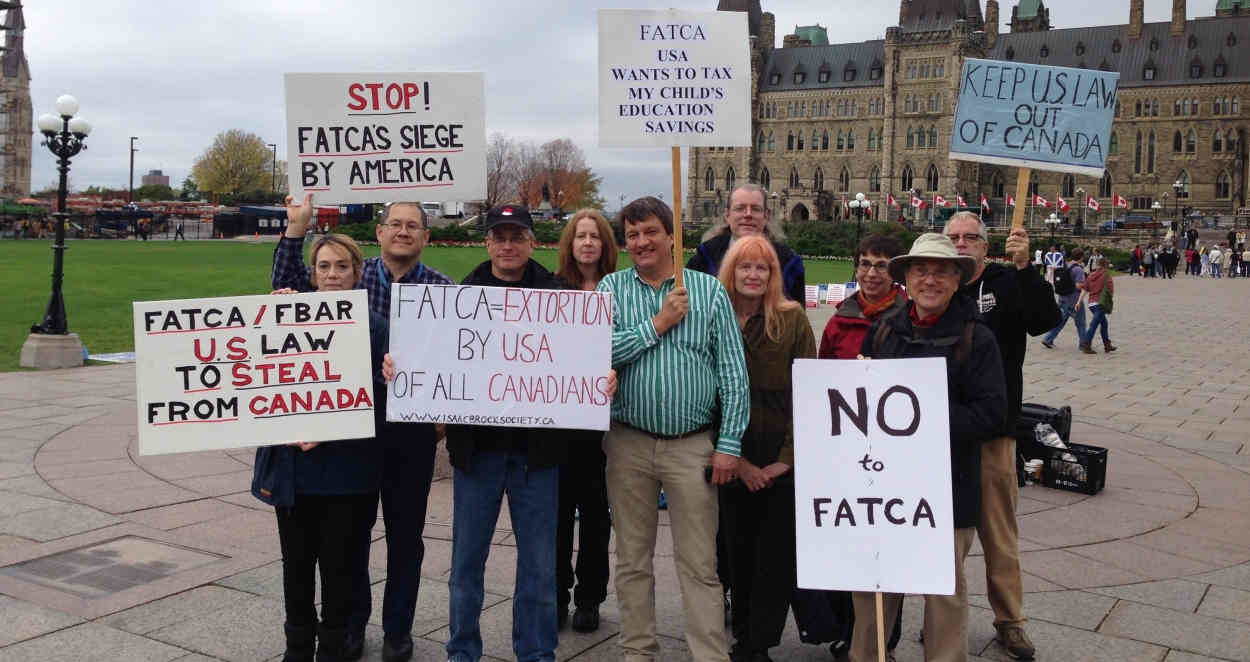 An anti-FATCA protest in October, 2013 in Toronto by members of the Isaac Brock Society campaign group

American expats and spokespeople for organizations representing them have been asking questions about the scale of U.S. expat data being forwarded to the U.S. under the Foreign Account Tax Compliance Act, after the latest Canadian Revenue Agency (CRA) report of such data revealed that around two thirds of the accounts sent actually fell below the US$50,000 FATCA reporting minimum threshold.

As in previous years, the data for the latest year for which such information exists – in this case, 2019 – was revealed by the Isaac Brock Society's website, which obtained it through Canada's answer to a Freedom of Information request, and published it earlier this month.

The request had been filed by a "Brocker" who is identified in the usual Brock way simply as "Concerned Citizen".

The report was picked up on social media by American expatriate commentators, many of whom saw it as proof that FATCA is a waste of time and money, as Americans don't use Canadian banks, at least, to hide their wealth from Uncle Sam, while others saw it as proof that those looking to avoid U.S. taxes were now using means other than non-U.S. banks to do so.

The Isaac Brock Society is a blog and platform for American expat campaigners founded in 2011 by a handful of Canadian-Americans, who even then were becoming increasingly frustrated by the American government’s intensifying efforts to come after them for failing to file tax returns and other transgressions.

According to its article on the 2019 FATCA data obtained from the CRA via an "Access to Information Act Request", Canadian financial institutions during that year reported "approximately 615,000 accounts with a balance under US$50,000 to the CRA,  for eventual transmission to the IRS under the terms of the FATCA agreement."

The article added: "The U.S.-Canada IGA sets out a reporting threshold of US$50,000 – accounts below this balance are not required to be reported.

"With approximately 1 million accounts reported in total for 2019, over 60% of these records did not need to be sent."

The article, written by someone whose Brock name is pacifica777, went on to note that since Canada began reporting began bank account information to the U.S. in 2014, roughly one-half to three-quarters of all accounts reported fell below the balance threshold and need not have been included in the annual transmission of data to the IRS.

Although the Canadian Revenue Agency has released some FATCA data to the public, pacifica777 says the numbers it obtained through the Access to Information Request are "more accurate".

The table below was created using this information requested data: 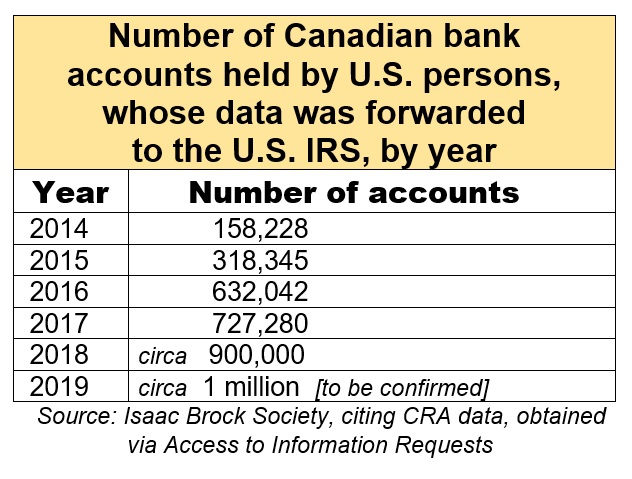 CBC: Questions being asked in Ottawa

A report the week after the Isaac Brock story was posted, the Canadian Broadcasting Corporation added some detail to the data, and quoted Canadian officials questioning the scale of the data transfer.

The CBC report noted that as of 2016, there were around 825,620 people with U.S. citizenship living in Canada, of whom 622,492 were of voting age, U.S. Federal Voting Assistance Program data shows.

"While opponents of the [FATCA] agreement have long suspected that the banks and the CRA were sending the IRS information about more accounts than necessary, this is the first time the CRA has stated publicly how many accounts shared with the IRS fell below the mandatory reporting threshold," the article, by the CBC's regular U.S. financial news journalist Elizabeth Thompson, went on.

It then quotes Canadian MP Philip Lawrence, the Canadian Conservative Party's "critic for national revenue," as saying that he would like to see a parliamentary committee investigate why the number of records the CRA transfers to the IRS has been rising over the years.

"If, in fact, we are giving more than we are required to through FATCA or other negotiated settlements, that's something we need to understand...because we are giving away precious private information of Canadians to another country," the CBC article quotes him as saying, before noting that another Canadian politician, NDP MP Matthew Green, "also questioned the CRA's track record on protecting data about Canadian citizens".

It said Green also said that Canadian residents should be told when their private bank record information is being shared.

The article ended by quoting various officials explaining that the Canadian banks would rather over-report than under-report the information FATCA requires to, because the downside for being found to have failed to report an American with more than US$50,000 in their Canadian accounts was to be hit with punitive penalties.

"Banks are not going to police a line at US$50,000 because there's a risk to banks being wrong about that," the article quotes a McGill University tax law expert named Allison Christians saying.

"Why would you bother?"

As reported earlier this month, the Canadian government formally defended its allowing – and enabling – Canadian banks to send their American account-holders data to the U.S., as required by FATCA, by noting that this enabled it to avoid possibly "catastrophic effects" that might otherwise impact Canada's financial sector, its customers and the broader economy, according to Canadian media reports.

The Canadian government's comments were contained in a recent filing with the reports said.