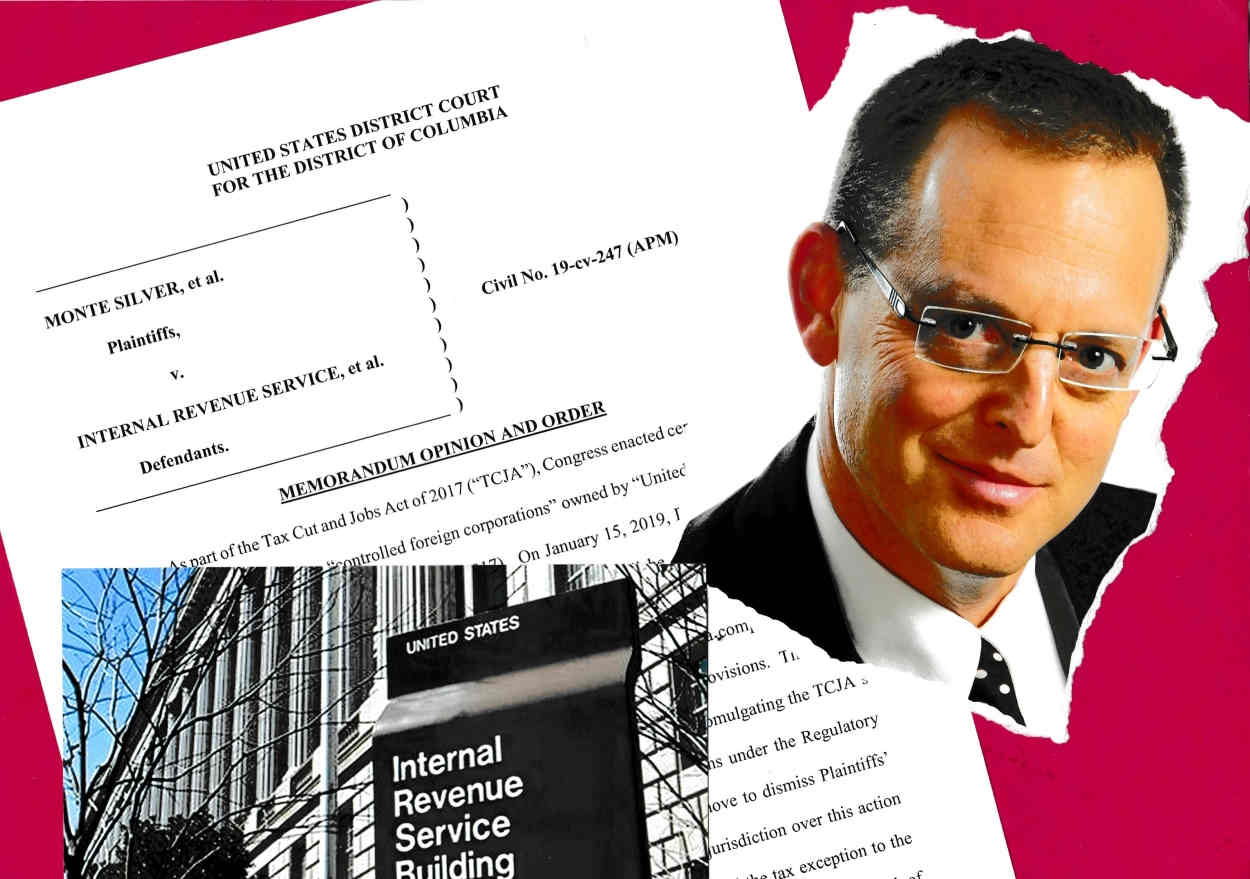 Monte Silver, the Israel-based U.S. tax attorney who recently saw his and his company's legal attempt to challenge the Transition Tax and GILTI elements of former Donald Trump's 2017 Tax Cuts and Jobs Act dismissed on a technicality, has made good on his vow to continue to pursue the matter "to the very end," with the filing of two motions in a U.S. District Court on Friday.

Through his lawyer, Lawrence Marc Zell, Silver and his company, Monte Silver Ltd., filed a "motion for reconsideration and motion to amend" in the matter of his Transition Tax challenge, and, in a separate motion, filed a "supplemental brief in opposition" to the U.S. government's motion to dismiss his GILTI challenge.

In both lawsuits, Silver continues to allege that the Transition Tax and GILTI regulations, contained in in the TCJA, violate the law in a variety of ways, including the fact that the final version of the TCJA regulations failed to contain a "regulatory flexibility analysis" that's required by the Regulatory Flexibility Act (RFA), a U.S. law that requires federal agences to review regulations for their impact on small businesses. (The fact that Silver's law firm, Silver & Co., qualifies as a small business itself was an element in his challenge.)

He also alleges that both the Transition Tax and the GILTI regulations violated something called the Administrative Procedures Act – a federal statute that sets out how U.S. laws must be written.

In February, the court "stayed" Silver's GILTI challenge, pending resolution of the Transition Tax matter, but as his filing of two motions on Friday reveals, Silver intends to keep pursuing that one "to the very end" as well.

As reported, a U.S. District Court in Washington, D.C. last month officially rejected Silver and his company's arguments, declaring that they lacked the "constitutional standing to pursue their claims".

The 30-page, March 28 decision had been issued by the same U.S. District Court Judge, Amit P. Mehta, who three months earlier had denied the defendants in the case, the U.S. Internal Revenue Service et al., a request to have it dismissed.

After giving the matter some thought, he announced his decision on April 6 to appeal the decision and to go ahead with both his claims "to the very end", with the backing and financial support of other expat small-business owners, whom he's reached out to on his Facebook page, American small businesses for tax fairness, and where he also posted a link to enable supporters to make donations.

Silver, pictured above, next to a copy of his original filing, first filed his challenge against the Transition Tax in February, 2019, after certain asked-for last-minute changes to Trump's Tax Cuts and Jobs Act weren't made, thus leaving intact what he and others claimed was its harsh treatment of owners of small, non-U.S. businesses owned by Americans.

Silver's arguments for court to revisit his claim

In his latest court documents, which the AXFNJ has seen copies of, Silver argues that the court should "reconsider its findings" that the plaintiffs lacked standing, arguing, among other things, that it was wrong in its allegation that businesses had to show actual harm in order to obtain judicial relief from onerous regulations. He cited a clause in the RFA which noted that judges could in fact grant relief to small business entities that were suffering as a result of burdensome regulations without having to prove actual injury, in certain circumstances.

He concludes by saying that the court was being "respectfully requested" to find that the plaintiffs (Silver and Monte Silver Ltd.) had the standing to maintain their lawsuit, were in fact "regulated" small entities for the purposes of the RFA; and that they should be granted leave "to amend their complaint to add a request for relief in the form of nominal damages", in addition to "any other relief [that] the court finds fair and equitable."

The defendants in the matter have been changed to reflect the changes that have taken place since Silver originally filed his lawsuit, and now include Treasury Secretary Janet Yellen, in addition to the Internal Revenue Service, the U.S. Treasury Department, and IRS commissioner Charles Rettig.

To view what is referred to as an "Explanatory Chart Regarding a CFC's [Controlled Foreign Corporation's] Regulated Status under the Transition Tax," setting out what are evidently many of Silver's key arguments, click here.