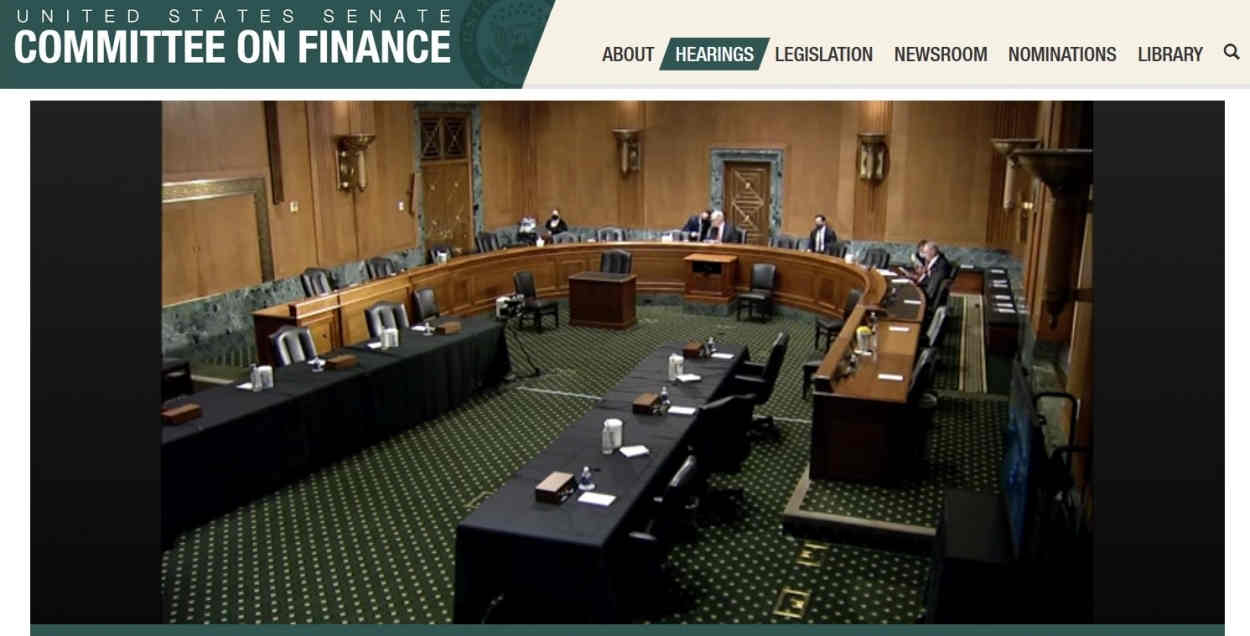 Spokespeople for advocacy organizations that represent American expatriate interests – as well as many expatriates themselves – have been expressing concern over what they say appears to be a significant lack of awareness among key U.S. lawmakers of how expat taxpayers currently struggle with U.S. tax regulations, based on these lawmakers' comments and testimony during a Senate Finance subcommittee 'Tax Gap' hearing on Tuesday.

The Subcommittee on Taxation and IRS Oversight hearing, based in Washington but contributed to via online connections by most of its participants, addressed the topic of "Closing the Tax Gap: Lost Revenue from Non-compliance, and the Role of Offshore Tax Evasion," and is still available to view online, on the Senate Finance Committee's website.

Of particular concern, the expat advocacy organization spokespeople and expats said, was these lawmakers' failure to mention how a 2010 law aimed at tackling the use by American taxpayers of overseas financial institutions to avoid their U.S. tax obligations, known as FATCA, has significantly disrupted the financial lives of millions of expats, many of whom have struggled to maintain bank accounts, save for their retirements and own property.

The danger is that in their determination to address what they all seemed to agree had become a worryingly-huge gap between the tax revenues the IRS is receiving and various experts' estimates as to what it should be getting, these and other U.S. lawmakers and officials will seek to ramp up enforcement of existing regulations that are already making life hard for expats, in addition to introducing new and equally-damaging legislation, these advocacy organization spokespeople said.

Some also questioned the Washington lawmakers' assumption that non-U.S. financial institutions are actually even still being used for large-scale tax evasion by individual  American taxpayers, given such institutions' widespread reluctance to have American citizens anymore as clients, as a result of FATCA (Foreign Account Tax Compliance Act). This reluctance stems from the fact that FATCA carries with it significant penalties for any institution found to have American clients on its books, but not reporting their account data to the U.S., as FATCA obliges them to.

"The hearing clearly showed that the IRS and Treasury do not have a complete picture of the tax and compliance issues that Americans living and working overseas already have to deal with," American Citizens Abroad (ACA) executive director Marylouise Serrato said, echoing the comments of others interviewed.

"There is a lack of data and information, both financial and demographic.

"During the hearing, for example, Treasury Inspector General for Tax Administration (TIGTA) J. Russell George stated that there is no reliable figure for the international tax gap, and [Center for Taxpayer Rights executive director] Nina Olson cautioned against creating new policy based on 'guesstimates'."

Association of Americans Resident Overseas (AARO) board member Paul Atkinson added: "The concern is that, in their effort to address a 'tax gap' that no two official estimates seem to even agree on the size of, let alone much else, Washington will introduce a wave of new enforcement initiatives that, while not specifically targeted at overseas Americans, will nevertheless capture them in the undertow, the way such previous efforts at improving tax compliance as FATCA, GILTI and the passport revocation law of 2015 have.

"A lot of the rhetoric is targeted at wealthy Americans, but this focus on offshore evasion by individuals is badly-thought out, and any resultant legislation is unlikely to be well-targeted."

AARO president William Jordan added that in addition to questioning much of the data being presented, he "[found] it not only deplorable but downright irresponsible that neither ACA nor AARO were invited to participate as witnesses at this hearing."

IRS: FATCA 'yet to be enforced' 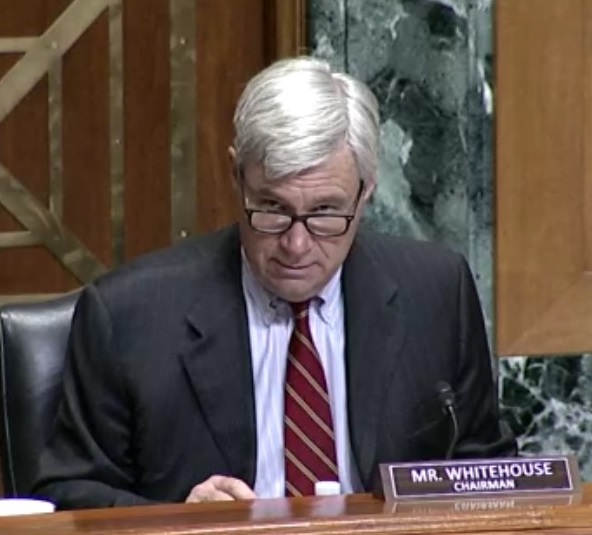 Several ordinary expats, meanwhile, expressed alarm at comments, made towards the end of the hearing by TIGTA's George, that they said revealed that U.S. officials see  FATCA as yet-to-be-enforced, even though it has been wreaking havoc for years on their ability to maintain bank accounts, save for retirement, invest and otherwise maintain financial accounts in the countries in which they live.

They pointed as an example of this to a response from TIGTA's George, in answer to a question posed by committee chairman Sen. Sheldon Whitehouse (D., R.I.), pictured left, as to whether the IRS had yet been able to begin to "meaningfully enforce" FATCA.

Replying, George, pictured below right, said the agency was still struggling to, as a result of its lack of "some very basic tools", including Taxpayer Identification Numbers (TINs). 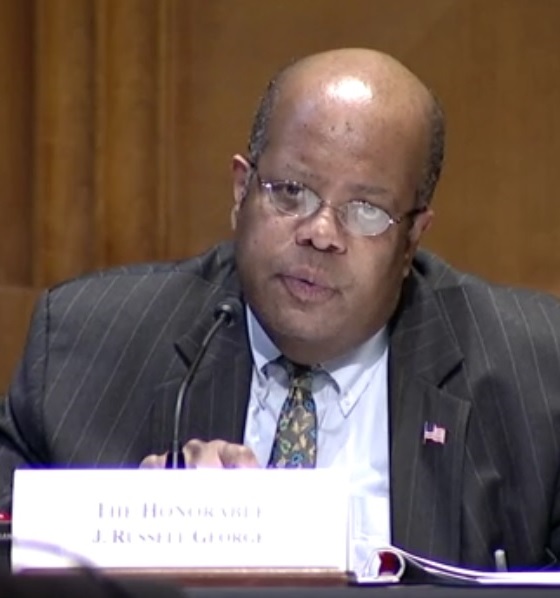 "We're literally talking about Social Security numbers, in many instances.

"The IRS has done a tremendous amount of work, working with nations across the globe, to initially get this program off the ground.

"But the basic thing lacking...is the ability for the IRS to necessarily match up the information that it receives – then again, may not receive – from one party or the other.

"So a light needs to be placed under the IRS to get them moving on that one.

Also not mentioned was the fact that most of the rest of the world has signed up to an automatic information exchange program that's almost identical to FATCA, known as the Common Reporting Standard (CRS) which was conceived and brought into existence by the Organization for Economic Cooperation and Development (OECD) a few years after the American law. The U.S. is one of only a few jurisdictions that haven't signed up to it, and, since FATCA doesn't automatically require the U.S. to provide FATCA signatory countries with the same information about their taxpayers that it requires of them, some experts have said this is resulting in the U.S. becoming a tax haven of choice for much of the rest of the world.

(Other countries' expatriates don't struggle with CRS reporting obligations in the same way as Americans because unlike the U.S., their countries tax on the basis of residency rather than citizenship.)

Last week, meanwhile, the New Republic reported that the U.S. was emerging as "the money-laundering capital of the world," an observation that, it noted, was highlighted in an International Consortium of Investigative Journalists' exposé last fall.

Others quoted in the piece included Sen. Whitehouse and Elise Bean, a former associate of ex-Senator Carl Levin and well-known FATCA supporter.

To address this money-laundering issue, U.S. lawmakers are working on what's being called the Anti-Money Laundering Act of 2020, "the first major update to bolster laundering controls in 20 years," the New Republic article notes.

On Twitter, several expats took exception to what Sen. Whitehouse, in the closing minutes of Tuesday's hearing, acknowledged was his "effort at tax humor," by noting that it was "too bad we couldn't put an extra 't' on [FATCA]. Then it would say 'FAT CAT', which would be such an appropriate acronym for it."

"My jaw hit the floor," tweeted one American expat, whose Twitter handle is @CrossBriton.

"After 10 years of overwhelming evidence of the destruction #FATCA has caused ordinary people including gross violations of our basic rights, @SenWhitehouse thought it was good material for a joke?"

Added another, addressing his Tweet to @SenWhitehouse: "It is broad-brush thinking like this that has destroyed so many lives of middle-class Americans living abroad." Still another addressed the hashtag "#notFATCATs" to Whitehouse's Twitter address.

Several expats tweeted links to a Bloomberg opinion piece from last December, "Letter from 9 million U.S. Expats to Janet Yellen," again addressing @SenWhitehouse. The article, written by a dual U.S./German citizen and Bloomberg editorial board member named Andreas Kluth, sought to advise the then-U.S. Treasury Secretary nominee as to how, once she became Treasurer, she might help American expats by making some "simple tweaks" to U.S. tax regulations "that would cost the U.S. nothing in lost revenue, save you a packet in enforcement expense and make our lives easier."

Also at that address is information detailing how any "individual or organization wanting to present their views for inclusion in the hearing record" might be able to share them by submitting them "in a Word document... single-spaced... not exceeding 10 pages in length." No other file type would be accepted, the subcommittee says.

Such statements would need to be received no later than two weeks after the hearing, which would be by May 25. They would need to be e-mailed to This email address is being protected from spambots. You need JavaScript enabled to view it., or mailed – ("not faxed") – to:

The Senate Subcommittee on Taxation and IRS Oversight hearing comes less than three weeks after a full Senate Finance Committee hearing, also virtual and live-screened as well as recorded, on how the country's "international tax policy" was seen to be impacting U.S. workers, jobs and investment.