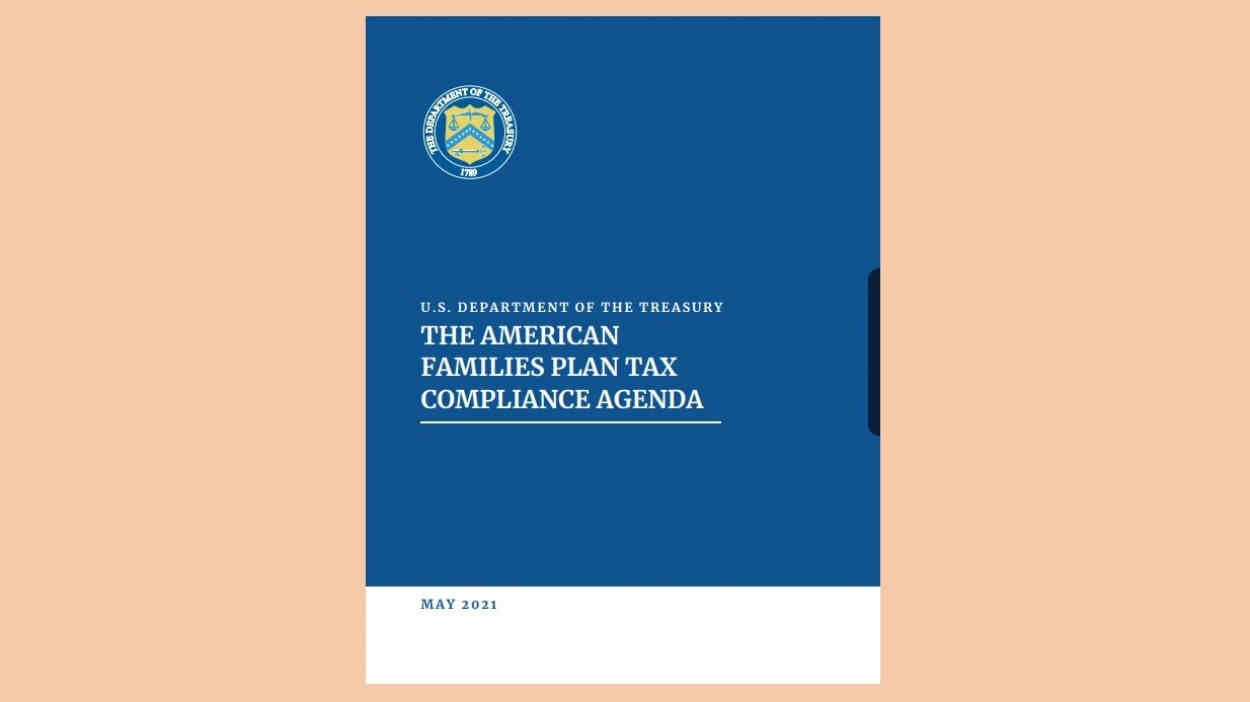 The U.S. Treasury on Thursday unveiled an outline of how it intends to address America's vast so-called "Tax Gap" by funding a  multi-year, "nearly US$80 billion rebuilding" of the IRS; boosting tax compliance by increasing personal and business financial account reporting; and increasing its regulation of paid tax preparers.

The Treasury document also details how the U.S. authorities plan to bring cryptocurrency and cryptoasset exchanges into the IRS reporting net, as it sees such transactions as "likely to rise in importance in the next decade, especially in the presence of a broad-based financial account reporting regime." Under the information reporting changes that the Treasury is proposing, Americans involved in cryptocurrency transactions of US$10,000 or more would have to report these to the IRS.

The central theme of the 24-page "American Families Plan Tax Compliance Agenda" is that increased tax compliance will follow naturally from more comprehensive reporting of taxpayers' finances, alongside a long-overdue updating of the Internal Revenue Service's technology and IT systems.

As a Treasury summary of the agenda points out, "the IRS still relies on Individual and Business File Systems that date back to the 1960s – the oldest [such systems still in use by] the federal government."

Many Americans who live overseas know better than most just how out-dated the IRS's systems are, because they've struggled to find banks in their countries of residence that would be able to accept deposits of U.S. CARES Act stimulus checks, as money transfers in these countries are now all done online, something the IRS isn't yet able to do with overseas accounts.

As the Treasury document's name suggests, it's a component of President Biden's "American Family Plan," a package of proposals unveiled last month that are seen as boosting U.S. government spending in such areas as childcare, paid-leave, pre-school education and healthcare by increasing the U.S. federal income tax take, both by raising taxes on wealthy Americans and reducing tax avoidance.

'Agenda' publication follows on from hearing

Thursday's release of the Tax Compliance Agenda comes a little more than a week after a Senate Finance subcommittee hearing on the Tax Gap heard from IRS officials, Congressional representatives and others on the subject of the Tax Gap – a number usually measured in the billions (and increasingly, trillions) of US dollars that represents the difference between the taxes that it's thought the government should have received and the amount that taxpayers actually paid.

As reported, the deadline for "individual[s] or organization[s] wanting to present their views for inclusion"  in that hearing's record still have until next Monday to submit their statements.

Expatriate Americans and tax experts who specialize in American expat taxes said the measures detailed in the Treasury document were certain to increase the reporting burden on U.S. taxpayers and business owners located outside of the U.S.

"Not mentioned: It's going to make it even tougher for 9 million Americans to receive their salaries or pay rent," Tweeted one expat.

"FATCA has already created massive problems [for expats] with refusal of bank accounts – doubling down on it is only going to make it worse."

Few seemed surprised, though, particularly after last week's subcommittee hearing, which was entitled "Closing the Tax Gap: Lost Revenue from Non-compliance, and the Role of Offshore Tax Evasion." None of those testifying at that hearing acknowledged how such existing anti-tax evasion measures as the 2010 Foreign Account Tax Compliance Act have already made life so complicated for ordinary (as opposed to wealthy) expats that the numbers renouncing their citizenships continue to soar, nor how new measures might be designed to prevent further adding to these expatriates' burden.

David Treitel, founder and managing director of London-based American Tax Returns Ltd, said that the news that the IRS was "to be given cash to modernize and tackle tax evasion, and to finally replace the IBM mainframe computers they installed way back in 1962" was, on the surface at least, as uncontroversial and patriotic as "motherhood and apple pie."

"But the IRS requiring all banks and financial institutions to report the total amounts going in and out of everyone’s bank accounts every year will be seen by some to cast a shadow over the 'unalienable rights' that Americans treasure, of life, liberty and the pursuit of happiness," he added, while the "extra-large size portions of information about us all" that the IRS will soon be in possession of was "all-but-certain to be used wrongly and/or hacked by criminal elements.

"And expats will not be immune."

Liz Zitzow, managing director of British American Tax – another London tax firm that looks after American expats – said her concern is that as it modernizes, the IRS will look to automate more of its operations.

"The problem for overseas filers in particular is that whatever new systems the IRS sets up, they will assume that the taxpayer has at least one of the following: a computer, a U.S. phone number, and a U.S. ID number (SSN, EIN or ITIN) – or god forbid, all three," she said.

Accounting Today, the U.S. publication, headlined its story on the Treasury report "Treasury hopes for billions from cracking down on ghost preparers," identifying this as an area that lawmakers apparently see as ripe for potentially-revenue-generating regulation.

The publication focused on such planned measures spelled out in the report as "regulating unlicensed tax preparers, sanctioning so-called 'ghost preparers' (who don't sign their clients' tax returns) and increasing the penalties on preparers who help their clients evade taxes."

The article links to an earlier Accounting Today report, which notes that "regulation of unenrolled tax preparers has been a longstanding goal of the IRS, Senate Finance Committee Chairman Ron Wyden, D-Oregon, and other lawmakers," after an attempt to introduce regulation of the sector during the Obama administration got derailed, after the IRS lost a court challenge brought by a group of independent tax preparers.

Also on Thursday, and again addressing the subject of the U.S. Tax Gap and its causes, the U.S. Treasury Inspector General for Tax Administration issued its own report,  focusing on the need for U.S. companies to improve their federal tax withholding processes and procedures.

According to the report, entitled "Backup Withholding Noncompliance and Underreported Employment Taxes Continue to Contribute Billions of Dollars to the Tax Gap," backup withholding noncompliance by U.S. companies "continues to result in payers avoiding payment of billions of dollars in withholding each year."

It adds: "For Tax Year 2018, TIGTA identified 182,075 payers that submitted 440,404 information returns, for which the payee Taxpayer Identification Number was either missing or incorrect, yet the payers did not backup withhold US$13.3 billion on US$55.6 billion in reported income.

"In addition, payers continue to report billions of dollars in payments associated with Taxpayer Identification Numbers of deceased individuals."

This report, which is 37 pages long and which contains sections that have been redacted ahead of its being made public, may be viewed and downloaded by clicking here.