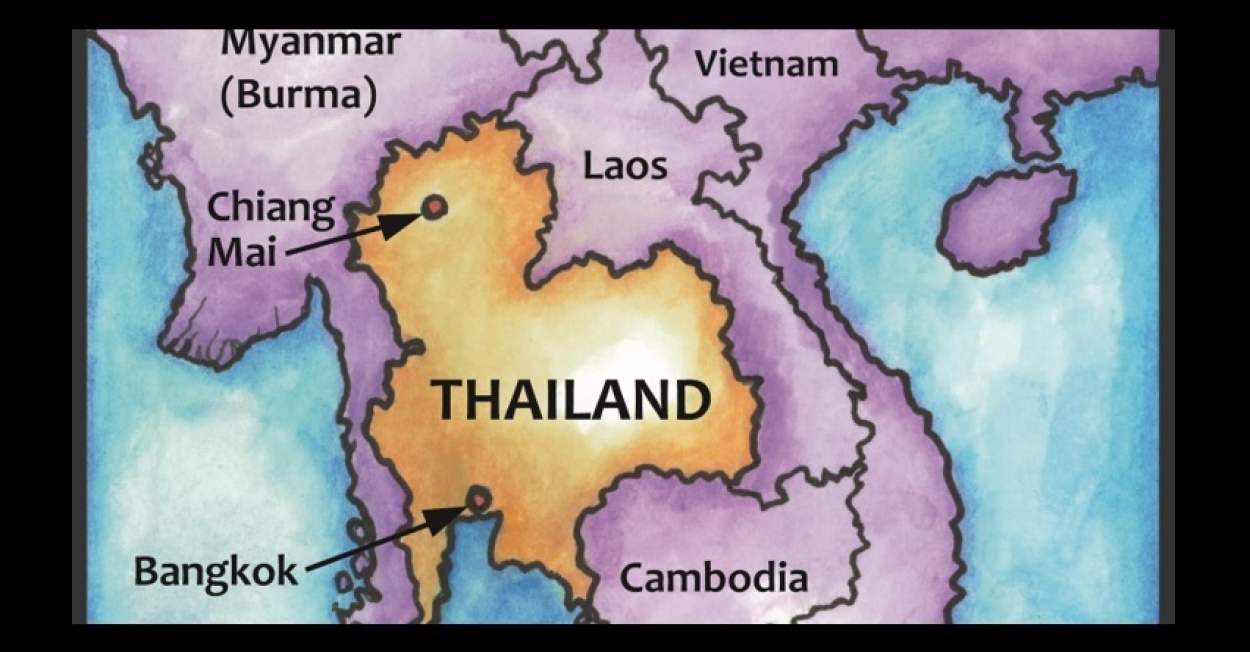 Foreigners currently resident in Thailand "must receive 20% of a 1.5 million [dose] batch" of Covid-19 vaccines that the U.S. has commited to donate to Thailand, the chief of Thailand's National Security Council has been quoted as telling the country's media organizations.

However, Americans in Thailand say that at least for now, they have yet to see any change in the vaccination situation there, which, as the American Expat Financial News Journal has been reporting for months, has seen many such expats having to leave Thailand in order to get vaccinated, or remain unvaccinated in Thailand and try to avoid being exposed to the Covid-19 virus.

Aseannow.com, an English-language news website that until recently was known as Thaivisa.com, reported on Tuesday (June 6) that Gen. Natthaphol Nakphanich had made the statement the day before to journalists with Thai PBS, a local media outlet. Gen. Nakphanich is also head of Thailand's Centre for Covid-19 Situation Administration (CCSA).

The general "asked the Thai people for understanding in this regard, and assured them that the rest [of the vaccines being donated by the U.S.] will be used for their benefit," the Aseannow.com report said.

It added that the vaccine supplies were due to arrive "before the end of the year," a timing forecast that is unlikely to impress the thousands of Thailand-resident foreigners who are increasingly frustrated by the country's failure to make vaccinations as available as they are in most other countries.

As reported, American expats have emerged as among the most frustrated in this regard, owing to the fact that the U.S. has made no efforts to vaccinate its expats, even though it made vaccines available not just to Homeland Americans, but also to its embassy and consulate staffers around the world.

The reason for their frustration, the unvaccinated Americans say, is because American expats – unlike those of almost all other countries, with the exception of Eritrea –  are obliged to file U.S. tax returns and potentially pay taxes to the U.S. while abroad.

Among those endorsing this view publicly was a former U.S. Ambassador to Thailand, Michael George DeSombre, who, in a comment piece published on May 27 in the Wall Street Journal co-authored by another former ambassador, Scott Brown, argued that the time had come "for Americans abroad to be given their shots".

They added: "Americans living overseas are U.S. taxpayers, and should have the same access to free vaccines funded by their tax dollars."

Their argument was powerfully reinforced on June 24, when a bipartisan group of 26 U.S. lawmakers wrote to U.S. Secretary of State Antony Blinken to urge him to make Covid-19 vaccines available to American expats around the world, at U.S. embassies and consulates overseas.

The 26 members of the Senate told Blinken that although they "welcome the administration’s sharing of 500 million vaccines with 92 low-and lower middle-income countries," they thought the U.S. should donate "supplemental doses to U.S embassies and consulates to support vaccinating American citizens living in those countries as well."

Questions about '20% to foreigners' earmarking

According to Aseannow.com, Thai PBS didn't explain exactly why a proportion of the donated Pfizer vaccine batch was being earmarked for foreigners resident in Thailand, nor did it say whether the foreigners would be expected to pay for their shots. It also didn't say which nationalities, if any specifically, were being targeted by the obligation to vaccinate "foreigners."

However, some expats suggested that the stipulation was meant to address the issue of American expats not being looked after by the U.S. government in a discreet way, that wouldn't, for example, prompt U.S. expats in other countries to demand or expect a similar arrangement, because of widespread press coverage of the struggle American expats in Thailand in particular have been having.

In announcing the donation of "half a billion vaccines" to the world's lowest-income nations" on June 10, president Biden said the U.S. was doing so "with no strings attached."

He added: "Our vaccine donations don't include pressure for favours, or potential concessions. We're doing this to save lives."

The matter of foreign recipients being given a specific proportion of the doses earmarked for Thailand also isn't mentioned in a U.S. Embassy & Consulate in Thailand statement issued this past week.

As reported here last month,  one American expat who has lived for years in Thailand noted that Thailand currently has one of the poorest Covid-19 vaccination rates in the world – leaving American expats like her and her husband having to think seriously about flying back to the U.S. – which, she noted, many wealthy Thais had been doing.

This week, the same American told the American Expat Financial News Journal that "the vaccine situation [in Thailand] remains dire," with "the vast majority of the population" still unvaccinated, or under-vaccinated.

"We've tried to register [for vaccinations] through all kinds of systems, but so far, we've only managed to get onto waiting lists," she added.

"Even expats in the 'Phuket sandbox', where everyone is supposedly vaccinated, are reporting difficulties, according to a letter to the editor in the Bangkok Post."

'Priority to be given to 'at risk' expats'

In a separate development, Thai media organizations this week reported that the system for registering expats in Bangkok to receive the Covid-19 vaccine has been changed, in response to an increase in deaths of elderly Covid-19 patients.

According to a report in Thaiger – a regional news website that was created in 2016, in the wake of the demise of the English-language Phuket Gazette newspaper – "Those [expatriates] who are at least 60 years old or who have certain underlying health conditions are [to be] given priority in the next phases of the [Thai government's] vaccination campaign.

"The change in priority groups is a 'slight refocus' after the rise of deaths, particularly those who are over 60 years old, as well as the rise of infections and deaths involving the rapid-spreading Delta variant, according to Ministry of Foreign Affairs spokesperson Natapanu Nopakun."

Since the start of the pandemic last year, the CCSA has recorded 2,333 deaths caused by Covid-19, of which "the latest wave has accounted for more than 2,000."

In addition to those who are over the age of 60, those considered to have "underlying health conditions" for the purposes of being given priority in terms of vaccines are those with severe chronic respiratory diseases; coronary artery disease; chronic kidney disease; cerebrovascular disease; cancer patients receiving chemotherapy; diabetes sufferers; and the obese, Thaiger said.

It said foreign residents in Bangkok interested in knowing more, or registering, should go to Thailandintervac.com. 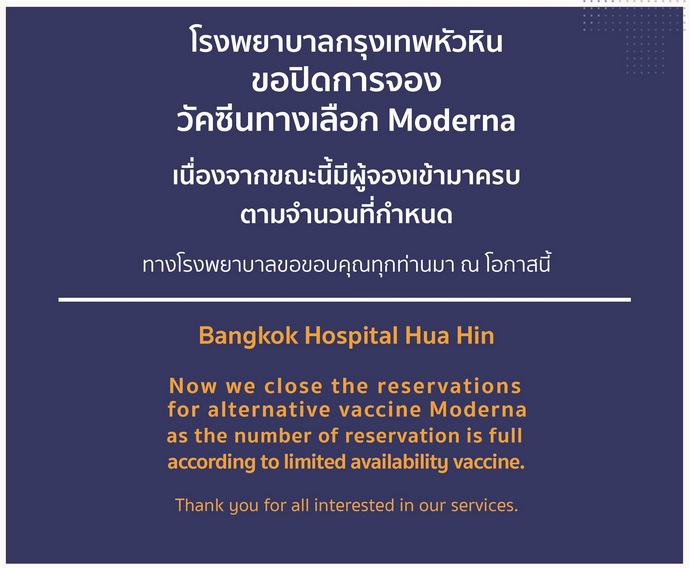 The day this story was published, a private hospital near Bangkok, the Bangkok Hospital Hua Hin, announced on its Facebook page that it would "open registrations for the Moderna [Covid-19] vaccine" the next day, July 7, according to an article on the HuaHinToday.com website.

By the end of the day, according to a notice on the hospital's website (pictured), all the available vaccines had been spoken for.