The U.S. State Department has reiterated that the U.S. "currently does not have plans to distribute Covid-19 vaccines to Americans overseas," according to the American Citizens Abroad, which has been calling on the government to provide vaccines directly to American expats struggling to get them in certain countries in which such vaccines are in critically short supply.

According to ACA, the State Department said in a statement that while the U.S. "does not provide direct medical care to private U.S. citizens abroad, we are committed to providing consular assistance to U.S. citizens in need overseas, including providing information on local medical resources when appropriate."

"Each U.S. embassy and consulate's website posts information on local Covid-19 vaccine availability and eligibility requirements in-country," the State Department's statement, which may be viewed on the ACA's website by clicking here, continued.

"We recommend that U.S. citizens overseas who want to receive a Covid-19 vaccine check the website of their nearest U.S. embassy or consulate.

"U.S. citizens who plan to return to the United States to get vaccinated may visit Vaccines.gov for information on vaccine eligibility and appointment availability here at home.

"If there are any changes to the Administration's policy, the Department will provide immediate updates via our Covid-19 information pages on travel.state.gov, and U.S. embassy and consulate websites, in addition to our other established methods of communication with U.S. citizens.”

ACA said it plans to continue advocating "on the vaccine issue," working with the offices of U.S. senators Chris Murphy (D-Conn.) and  and Jerry Moran (R-Kan.)  "on their bi-partisan outreach to the U.S. State Department."

As reported, senators Murphy and Moran, along with Sen. Chris Van Hollen (D-Md), were part of a bipartisan group of some 26 U.S. lawmakers who wrote to U.S. Secretary of State Antony Blinken in June to urge him to make Covid-19 vaccines available to American expats at U.S. embassies and consulates overseas, in countries where vaccine supplies were low to non-existent.

Said the letter, which was dated June 24 (and which may be read by clicking here): "We welcome the administration’s sharing of 500 million vaccines with 92 low- and lower middle-income countries. In addition, we urge you to donate supplemental doses to U.S. embassies and consulates to support vaccinating American citizens living in those countries as well."

The letter went on to note that the State Department had achieved "success" in its vaccination of "tens of thousands of Foreign Service personnel and their families," which it described as "a heroic undertaking by medical units at posts around the world.

"The Defense Department has also succeeded in administering more than one million doses across more than 80 international facilities around the world.

"In recognition of the challenge of vaccinating up to nine million private citizens overseas, we urge you to explore coordination with the Defense Department to maximize U.S. government capacity." 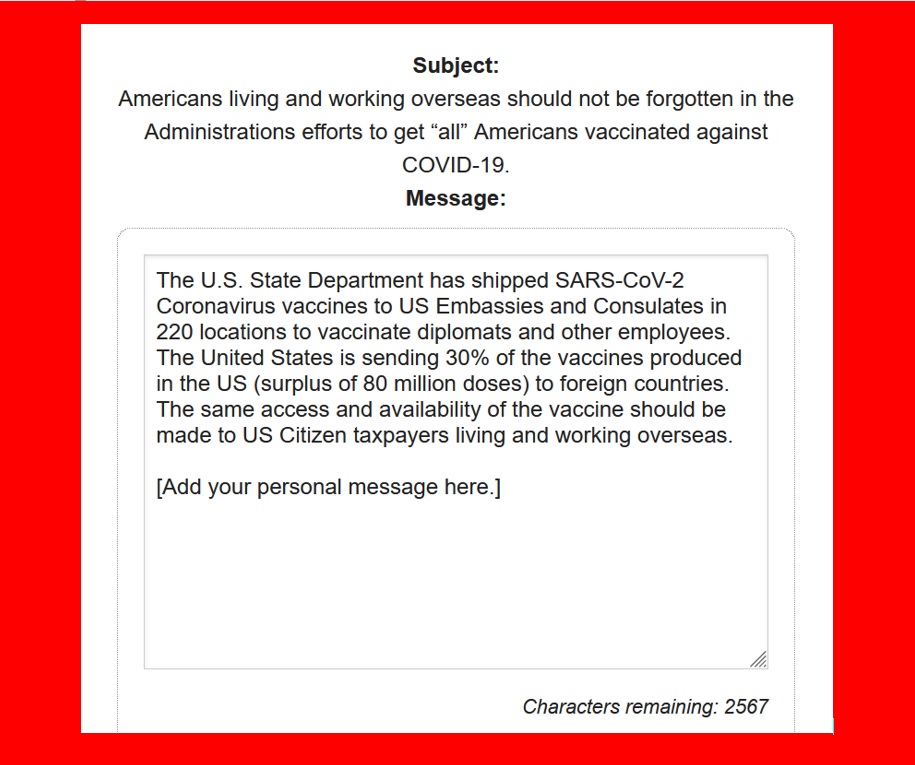 In its statement on Friday, ACA said it was planning to continue its pressure on the government to act on behalf of U.S. expats in need of vaccines, saying that it is "meeting with the 24 co-signers of the letter" to Blinken, and also advancing the issue with Representatives in the House.

ACA is also urging its members to join in a write-in campaign that it has set up to "ask that ALL Americans have access to the Covid-19 vaccine as promised by the Biden Administration," since such write-in campaigns have been found to be effective, and helpful to ACA in its advocacy work.

Information about this campaign may be found on the ACA website, as well as a template that expats may fill in and click a button to send to 14 recipients in the U.S. government (pictured left), by clicking here.

As this news website and others have been reporting for weeks, the call for vaccines to be made available to expatriate Americans has been particularly loud and forceful in Thailand, where the situation had become so fraught by last Wednesday that six Thailand-based media organizations issued a joint statement "demanding that the Thai government lift all restrictions, imposed under [its recently-declared] Emergency Decree, on freedom of expression by people and media," in response to what they said was government pressure being placed on them about their reporting.

A key element of the Thailand-based Americans' arguement to be given access to vaccines by the U.S. government is the fact that the U.S. is the only country in the world besides Eritrea that taxes on the basis of citizenship rather than residency. As a result, they note, all of the American expats in Thailand – of whom there are estimated to be around 40,000 – are obliged to file tax returns and other documents, such as Foreign Bank Account Reports, with the U.S. government every year, with potentially significant penalties for those who fail to do so; and although double-tax treaties usually take care of much of the income tax they might otherwise owe, there are instances in which expats are obliged to pay taxes to the U.S. as well, in addition to other difficulties, including the fact that the U.S. tax regime limits their investment options while they're abroad.

Meanwhile, both the French and Chinese governments chose to vaccinate their Thailand-based expats, even though these expats don't pay taxes to their home governments, the American expats in Thailand point out.

On Friday, Thailand saw its Covid-19 infection and deaths rates hit new records, the Bangkok Post reported on Saturday morning, with 178 deaths and 18,912 cases having been recorded over the previous 24 hours.