A close-up of the Coutts & Co. window, announcing its B Corp certification

The news that London-based Coutts & Co. has joined the ranks of the world's 4,070-plus companies that have signed up to operate within the ethical and environmental boundaries set by the B Corp organization is significant in a number of ways: not the least of which is the fact that it's only the third bank operating in the UK, thus far, to have done so.

And neither of the other two banks – "ethical banks" Triodos, based in the Netherlands, and UK-based Charity Bank – is anything like as well-known, established or historic as Coutts.

Coutts is also said to be the largest private bank and wealth manager in the UK to have achieved B Corp status – a fact which is evident to anyone who happens to have walked past its London offices recently (see photo, above).

Still, to judge by the way the B Corp phenomenon has grown since it was launched in 2006, it's only a matter of time before other major banks, and companies, join in, both in the UK and around the world.

What's more, the release on Monday (Aug. 9) of what's being called the "Code Red for Humanity" report, day (Aug. 9) by a UN climate panel, even as forest fires blamed on global warming were raging in California, Turkey, Greece and other countries, is likely to prompt even more companies to review their business models from an ESG perspective, many experts have said, if only because these companies know that their customers will now be reviewing everything they do, from a potential climate-affecting perspective, as well.

B Corp, or "Benefit Corporation" certification, is a concept that was created in the U.S. by three friends who, according to the global B Corp website, "left careers in business and private equity and created an organization dedicated to making it easier for mission-driven companies to protect and improve their positive impact over time."

B Corp certification is often described as being, to businesses generally, what the "Fair Trade" designation is to products such as coffee and produce.

Today, the UK – (where, as noted above, Coutts is based) – is home to some 430 B Corp-compliant companies, making it the No. 2 country, after the U.S., out of 77 countries that now have B Corp businesses within their borders.

Another new, and well-known name, to join the B Corp club recently has been Mishcon de Reya, a prestigious, so-called "Silver Circle" law firm, which, like Coutts, is based in London, though it was founded more recently than the bank (1937, rather than 1692).

A number of well-known major retailers, including the UK's Ocado, Waitrose and Boots, are not themselves Certified B Corporations, but have within their online retail structures a "B Corp shop" featuring products made by B Corp-compliant companies. (Waitrose's online B Corp "aisle," for example, which may be viewed by clicking here, was introduced in 2019, and includes such products as teabags, vintage port, beer, wine, bottled waters, cleaning products, chocolates, yoghurt, baby foods, popcorn, ketchup and breakfast cereals.

MASECO Private Wealth, the London-based wealth manager that specializes in looking after American expatriates, was awarded B Corp status in 2014, when it became the first UK company in the sector to do so. At that time, there were only six B Corp-designated companies in the UK, and just 963 globally (in 32 countries around the world), in 60 industries. (Today B Corp entities can be found in 153 industries.)

As MASECO senior wealth manager George King and partner and head of advanced planning Andrea Solana told the American Expat Financial News Journal two years ago, back when MASECO was preparing to become a B Corp in 2013, they didn't remember it as having forced any major changes to the company’s operation. That's because the company's founders were already big believers in the "doing well by doing good" philosophy, they explained, echoing an observation many other B Corp-affiliated company executives have also made over the years.

“My sense is that rather than saying, ‘Wow, we should become a B Corp, let’s make all these changes to fit that,’ it was more like we said, ‘We are already aligned with these values here at MASECO, this is who we are, it makes sense that we be a part of that [B Corp]’,” King said.

“What we've done is probably extended the extent to which we do certain things,” added Solana.

Among the things MASECO has done since it adopted the B Corp philosophy has been to introduce a range of "sustainable" portfolios, which, according to Solana, are basically a "sustainable equivalent" to the company's core range, to include funds and investments with a more "sustainable" agenda.

"It would be difficult if not impossible to try to cater to every possible nuance and preference in a portfolio, so what we do is realize that in addition to other concerns and issues that people may have, the probably biggest, over-arching, most impactful one is probably climate change, and the implications around that," Solana continued.

"So the sustainable portfolio range is seeking to both minimize the impact of, and try to accentuate companies doing better things around, the various implications around climate change."

Those whose main goal is something as specific as, say, saving polar bears, she suggests, might find other ways to encourage this than in their choice of investments.

King put it another way.

"If you went up to someone and said, 'I want to invest for you, in an un-sustainable way', you'd think that was ridiculous, which it would be. Investing un-sustainably would drain resources too fast, create wealth-impacting liabilities down the road and so on.

"So if you're thinking about making money over the long term, you're going to do something that's sustainable anyway.

"You don't have to be Mother Theresa or a philanthropist to understand that all of the aspects of sustainable investing are pretty much self-evident, when you think about it."

Peter Flavel, chief executive of Coutts, said one of the stated goals of the B Corp community, to "accelerate a global culture shift to redefine success in business and build a more inclusive and sustainable economy" had resonated with him and his fellow exectutives, when they were considering whether to sign up.

“Becoming a B Corp means we are seeking to meet the highest standards by way of transparency, social and environmental performance, and legal accountability," Flavel added.

"It also means that we want to strike the right balance between profit and purpose."

Coutts, which is a part of National Westminster Bank, said it will be working with Nat West's  "Purpose Led Accelerator" program "to support entrepreneurs and leaders of sustainable and responsible businesses looking to make the commitment and embark on the B Corp journey."

How to become a B Corp,
and what it involves

Businesses that sign up to become B Corp-designated companies agree to meet certain measures of sustainability in the way they're run, with the aim of creating a "general public benefit," while at the same time permitting them to generate reasonable profits for their owners.

Thus far, some 37 U.S. states have enacted legislation designed to accommodate companies wishing to incorporate as B Corp enterprises, according to B Lab, a non-profit organization based in Wayne, Pennsylvania, which develops and awards B Corp certification to for-profit entities. Benefit Corporation laws have also passed in Italy, Ecuador and Colombia, it adds.

Certified B Corporations obtain this status by achieving and maintaining a certain score on what's called their "B Impact Assessment", which takes into account the company's impact on its workers, customers, community, and environment. (These Impact Reports are posted on the bcorporation.net website.)  Certified B Corps also  amend their legal governing documents in order to ensure that their boards agree to a pre-set ratio of profit and general public good, relative to their public and environmental impact.

All of this is monitored by the B Lab organization, which requires companies to undergo the certification testing process every three years.

More information on the certification process may be found on the bcorporation.net website, where a statement notes that the organization is "currently experiencing overwhelming interest in B Corp Certification at this time," and explains that the review process is now taking "anywhere from 6 to 10 months to complete".

Also, it "can be challenging," the statement adds.

"[Only] about one in three [companies] that submit for certification will certify.

"But it is truly worth it!"

Pictured below is the "B Corp Declaration of Interdependence," which spells out the organization's official philosophy. 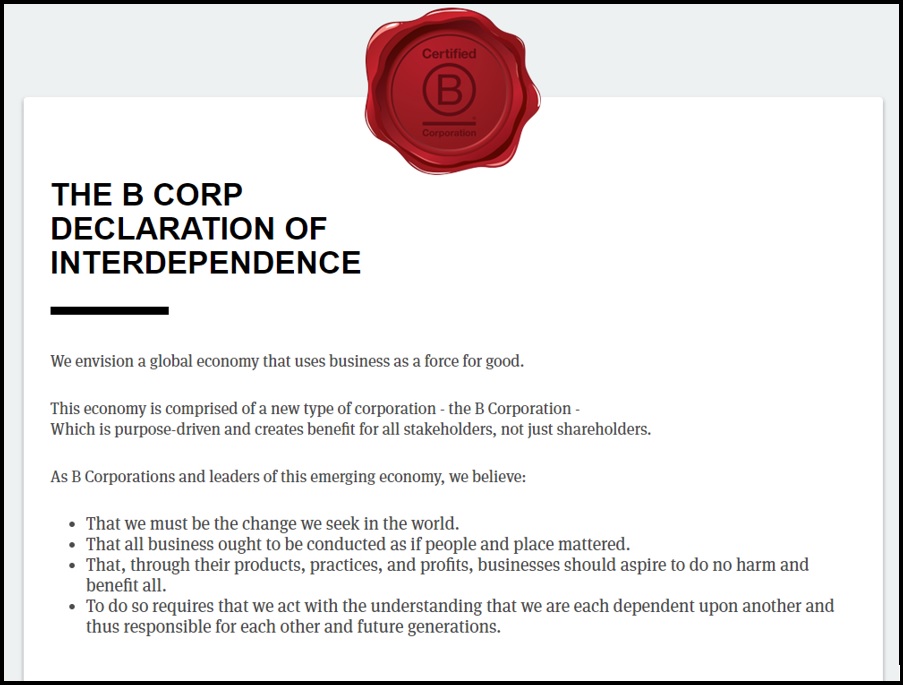