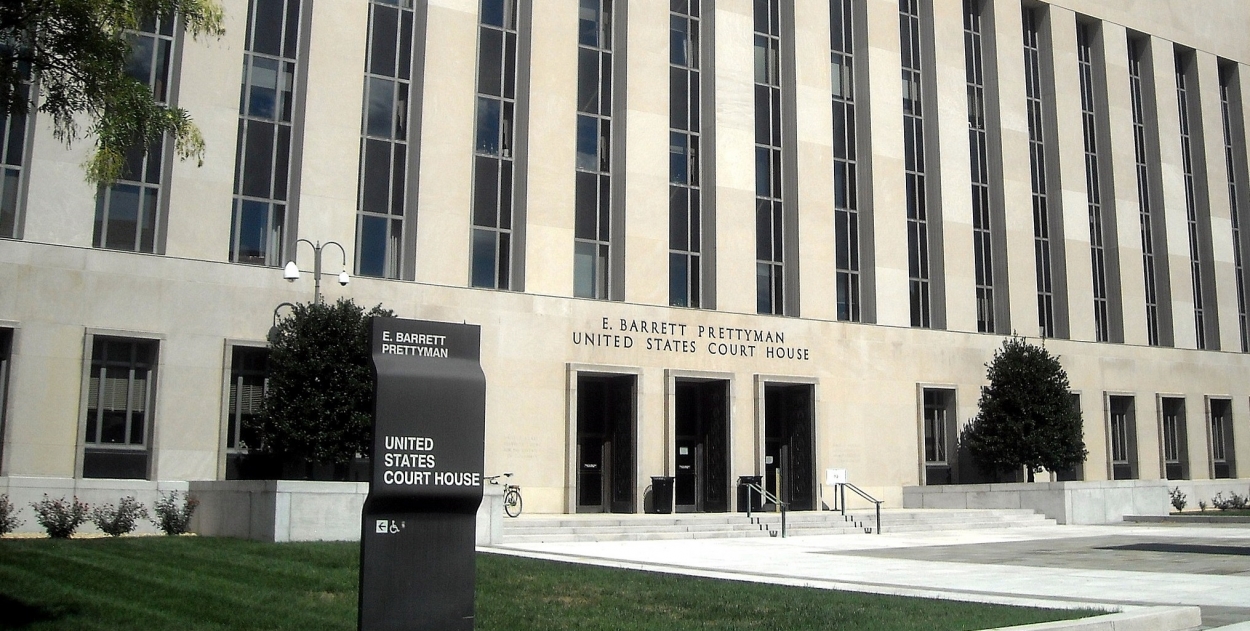 The Paris-based Association of Accidental Americans (AAA) has said that it has decided to go ahead with its latest complaint against the U.S. State Department, in an effort to force it to make it easier for dual citizens around the world who wish to give up their U.S. citizenships to be able to do so.

In an online statement issued on Sunday evening, AAA founder and president Fabien Lehagre said the organization had reached its crowd-funding goal of US$25,000 "in less than 10 days," with "more than 230 people" having agreed to help fund it.

(As reported, Lehagre announced the crowd-funding challenge on Sept. 5.)

"This new action should allow us to highlight the problems encountered by accidental Americans to American public opinion," Lehagre added, in his statement.

"We are already in discussion with several American media to best publicize the filing of the complaint, which should take place within a few weeks."

He added that donations were still being accepted.

The AAA already has an ongoing legal challenge against the State Department, filed last December, in which, along with 20 so-called accidental Americans of 10 different nationalities, it alleges that the US$2,350 fee the U.S. currently charges those wishing to renounce their American citizenship violates the U.S. Constitution and international law.

The right of an individual to renounce their U.S. citizenship "is a fundamental, constitutional, natural and inherent right under the U.S. Constitution," the AAA and its co-plaintiffs argued, in their complaint.

The AAA's latest complaint focuses, among other things, on a requirement that those seeking to give up their U.S. citizenship must appear in person before an official in a designated U.S. Loss of Nationality Services office, typically in a U.S. consulate, in order for their renunciation/relinquishment to be formally processed.

Even in the United Kingdom, for example, where people are beginning to return to work, schools are re-opening, and masks are no longer mandatory in many areas, the U.S. Embassy says, on its website, that although it is "in the process of resuming Loss of Nationality services", for now it remains "unable to accept new requests for appointments."

It adds: "We cannot provide a timeframe for when this service will fully resume, but we will update this website as information becomes available.

"Please do not email documents or send by mail until normal services resume."

The American Consulate General facilities in Edinburgh and Belfast are also "currently unable to accept appointments for Loss of Nationality applications," the U.S. Embassy statement adds.

Among those who are most frustrated by the inability to renounce easily at the moment are those whose banks have told them that they will no longer accommodate any Americans as account-holders. In some cases, the banks have stated that those dual citizens and accidental Americans who wish to retain their accounts could do so if they were to provide the bank's officials with a U.S. "Certificate of Loss of Nationality" (CLN) – which cannot be obtained without going through the full expatriation process.

Other institutions have said they'll continue to accept Americans, but only if they can provide them with the necessary Tax Identification Number (usually a Social Security number), which accidental Americans typically lack.

And many such "accidentals" are wary of entering the U.S. tax system even temporarily, in order to then formally relinquish their citizenship, as they don't consider themselves to be U.S. citizens merely because they happened to have been born there to non-American parents who left straightaway, or even having been born elsewhere to an American parent, but lived their lives as citizens and taxpayers of another country. 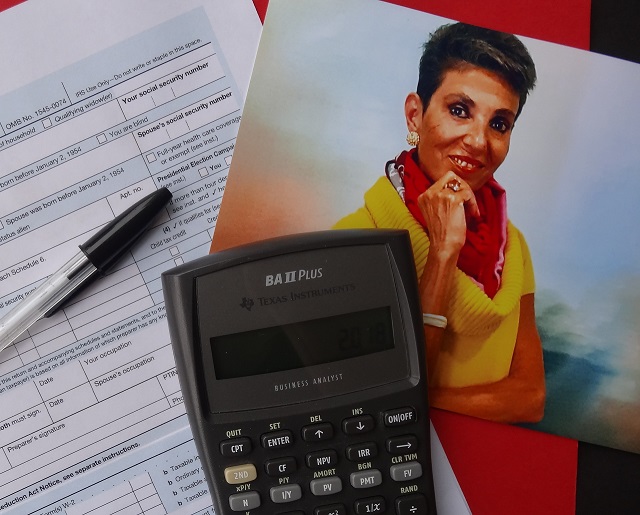 The AAA's announcement last week that it was looking to launch a second complaint against the State Department over the difficulties American expats struggle with, in attempting to relinquish their citizenships, seemed to touch a nerve among many Americans resident outside of the U.S., to judge by the reaction of many on social media.

The most comprehensive and well-documented response was probably that of Virginia La Torre Jeker, a Dubai-based American tax expert (pictured).

In her first blog after last Sunday's announcement of the AAA's planned follow-up complaint, La Torre Jeker, who is originally from New York and who has been helping American expatriates with their taxes since 1986, describes how the U.S. Consulate in Dubai had recently "advised it is not providing expatriation services, with the excuse being the 'Covid-19 pandemic' and 'Afghan refugee operations,'" after previously offering dates for the required in-person appointments.

La Torre Jeker's article, which may be viewed by clicking here, is entitled "Cannot Expatriate! U.S. Consulate in Dubai – Joining Others Worldwide, Closes the Door on Expatriations.'"

"An alternative title for this post could be: "Hasn't the State Department Heard About Zoom?" La Torre Jeker begins her blog by noting, a reference to an idea that others have voiced as well, that especially during a pandemic lockdown, the in-person meetings Americans seeking to give up their citizenships have traditionally been required to have could easily be replaced with online conferences.

"What’s become of the right to relinquish one’s US citizenship?" she continues, in her blog.

"It has been thrown a curveball for the past year and a half. Many U.S. embassies and consulates throughout the world are not offering the service.

"Those that did (or still do), often deny expatriation cases from individuals who are not resident in the country.

"Here in Dubai, I was successfully obtaining expatriation dates at the U.S. Consulate, provided the individual was resident in the United Arab Emirates.

"[But] the Consulate in Dubai has now just advised it is not providing expatriation services, with the excuse being the 'Covid-19 pandemic' and 'Afghan refugee operations.'"

La Torre Jeker goes on to consider what she calls the question of a "legally enforceable 'right' to expatriate," noting that the most recent court case addressing this question was decided "a scant two months ago, in Gerald Lee Farrell V. Antony Blinken Secretary of State."

She adds: "It is important to note that the statute governing loss of U.S. citizenship does not contain any requirement that the renunciation be made in person.

"The law leaves the procedural mechanism for renunciation up to the Secretary of State." 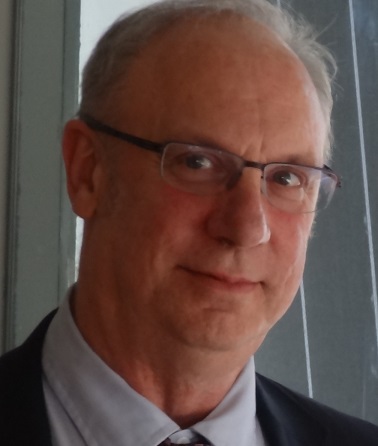 John Richardson, a Toronto-based lawyer and expat rights advocate who specializes in helping American expats to renounce their citizenships, says that in his own experience working with "a large number of people who have submitted their paperwork to get appointments to renounce, the backlog of those who submitted their appointment requests prior to March 2020 seems to have started to clear."

He adds that some people who submitted their requests after March, 2020 "have actually started to receive appointments."

However, he goes on, "significantly, there is no evidence that renunciation appointments have started again in Toronto," and "there continue to be a lot – I would conservatively guess thousands – who are waiting for appointments."

Richardson echoes La Torre Jeker in observing that what appointments are being made, in "pockets" around the world, are only accommodating "residents of the country in question, and what might have been called 'renunciation tourism' [where Americans formally apply to give up their citizenship in a country other than the one in which they live] is dead, at least for now."

Where renunciation appointments are most likely to be made, he concludes, seem to be in countries that were the least badly affected by the Covid-19 pandemic.

"European countries appear be opening up, as do Australia, Singapore and Japan. For now." 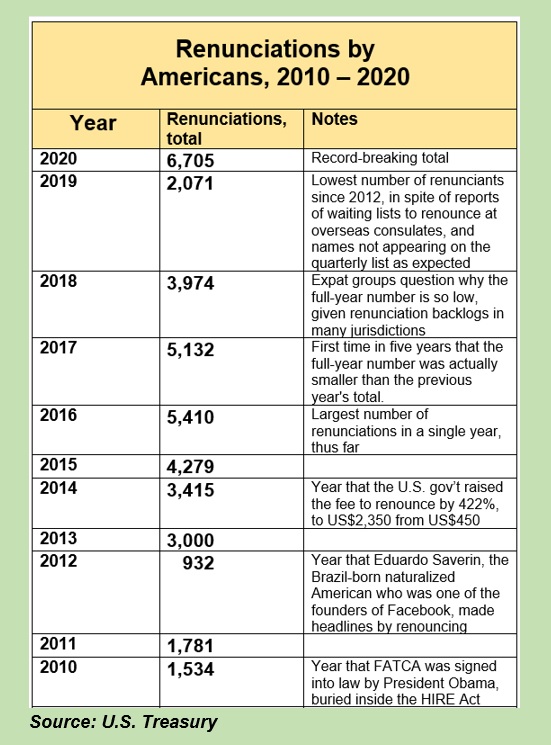 the number of people who were reported to have formally given up their U.S. citizenships  or Green Cards in 2020 was the highest ever, according to data published quarterly on the Federal Register. This was in spite of the widely acknowledged fact that renunciations were almost impossible to obtain from most U.S. embassies and consulates that year, owing to the more or less global coronavirus lockdown that was in place from around March 2020 onwards.

While the 2020 numbers were seen as confirming long-held suspicions that the quarterly Federal Register data was in fact not limited to the most recent three-month period, if indeed it had any names at all from it, the trend towards ever-greater numbers of "U.S. persons" heading for the exits was seen as further evidence of the difficulties Americans struggle with when they live outside of the U.S., as a result of the 2010 American anti-tax evasion law known as FATCA.

What's more, this rise has taken place against the backdrop of a significant increase in the costs involved in citizenship relinquishment.

Although renouncing was free in 2010, by last year, the basic fee was, as noted above, US$2,350, and those with assets of more than US$2 million are also  required to pay an exit tax, which for many older expats who happen to own their own homes, has the effect of making them remain U.S. citizens against their will.

Explains one American who currently lives in London, and is resigned to the fact that renouncing is out of the question: "I have not lived in the U.S. for more than 40 years, and I have never worked there, but because of the US$2 million ceiling, and the fact that I own an ex-council maisonette, along with some investments and a pension, I'm screwed, because my assets are just slightly over US$2 million.

"It is onerous and furthermore cruel, because I am hampered by how and where I might invest my meagre savings."