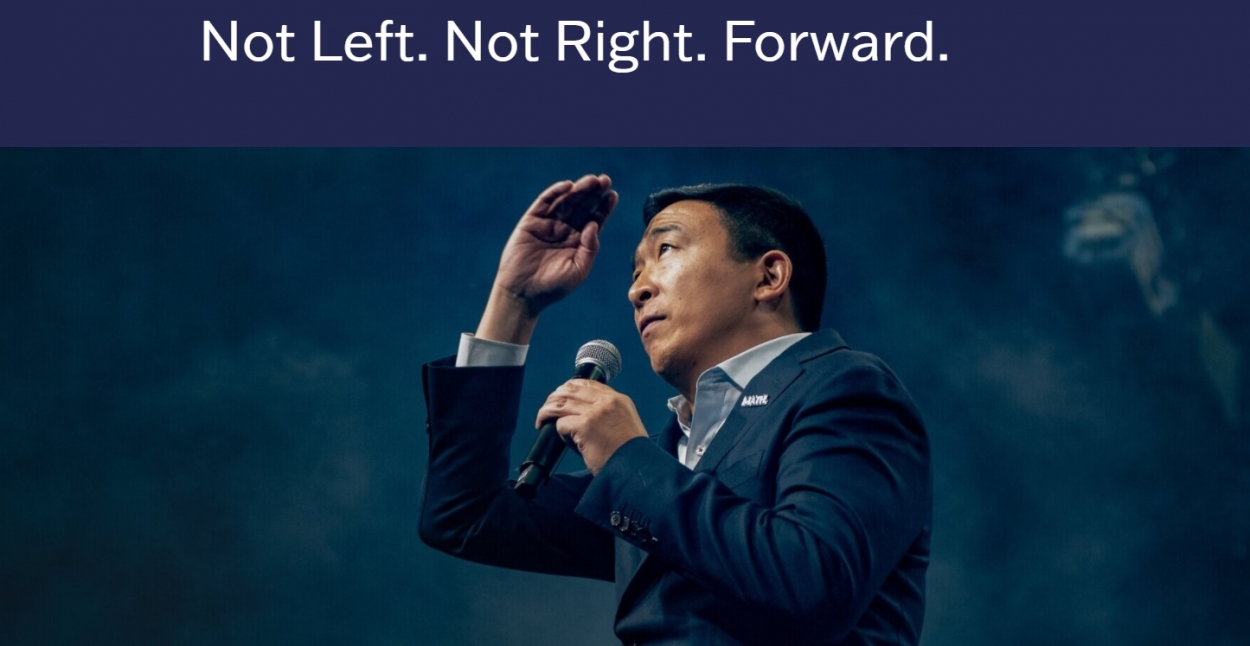 American expatriates who say they've been frustrated by the unwilllingness of either of the two major U.S. political parties to take their issues on board are pointing to the recent emergence of at least three new political parties in the U.S. as a reason to be hopeful that their voices might at last begin to be heard.

Two of the new parties in question are leftish-leaning, having been promoted and led by former Democrats. The newest of these is the Forward Party  (https://www.forwardparty.com), headed up by former Democratic presidential primary candidate Andrew Yang, whose photograph dominates the home page of the party's website (see photo, above).

As the photo shows, however, the Forward Party seeks to portray itself as being neither "Left" nor "Right" in its orientation, but rather, "Forward."

The other leftish-leaning third party is called the Movement for a People's Party (MPP, https://peoplesparty.org), which emerged in 2017, out of a 2016 effort that was initially known as the "Draft Bernie [as in Sanders] for a People's Party," according to press reports at the time.

The third third party is the Serve America Movement (SAM), which, again according to media reports, participated in the New York State gubernatorial election of 2018 by supporting its own candidate.

It is described in these media reports as being "center to center-right" politically, with a recent article  on a local Texas news website describing SAM's executive chairman, former Florida Congressman David Jolly, as having "divorced from the Republican Party in a public split over its fealty to [Donald] Trump."

On the home page of its website (https://joinsam.org/), though, it states that "we are current and former Democrats, Republicans, and independents who have come together with a common goal – to fix our broken politics in America."

No public statements on expat issues – yet

None of the three parties is known to have yet shown any public awareness of the American expat diaspora or its issues, but according to those expats the American Expat Financial News Journal has been able to speak to about the matter of these emerging third parties thus far, the mere fact that there could at last be a potential alternative to the Democrats and Republicans, come the next election, makes a compelling case for reaching out to them – if only, they say, to force the two major parties to pay more attention to their expatriate voters.

And one expat, who said he preferred to be identified simply as "Joe" from Thailand, said he has been talking to the Movement for a People's Party "since early 2021, about helping Americans abroad, and adding RBT [residence-based taxation] to their platform, and they are now well aware of our problems, and have addressed it a bit."

"I mentioned the possibility of launching a political outreach group for Americans abroad, and they liked that," he added.

Yang: 'The two-party duopoly is not working'

In addition to his bid to be the Democrats' candidate to take on Donald Trump in 2020, Yang, a New York State-born son of Taiwanese immigrants, also ran as a Democratic candidate in the 2021 New York City primary election earlier this year, losing out to Brooklyn Borough President and former police officer Eric Adams.

In a statement on the website of the Forward Party, Yang said that the main reason he launched it was because of something "we can all see – the current two-party duopoly is not working.

"While the two major parties have different issues, we can all see that polarization is getting worse and worse, with 42% of both parties regarding the other as not just mistaken, but evil...

"Worse, the incentives of our leaders are not necessarily lined up with ours, in large part due to a closed primary system that disproportionately empowers those with the highest stake in government.

"Approval of Congress stands at about 28%, while individual members sport re-election rates of 92%."

Efforts by the American Expat Financial News Journal to contact the Forward Party in order to find out what, if any, policy positions it has with respect to key expat issues, such as FATCA, citizenship-based taxation (CBT), the GILTI and Transition Tax issues in the 2017 Tax Cuts and Jobs Act, and the Windfall Eliminations Provision, weren't immediately successful.

On its website, the Movement for a People's Party stresses the need for a party to "represent the interests of the wide majority of us and create a system to sustainably maximize well-being for ALL."

It adds: "So many of us realize Congress currently does the bidding of Wall Street, corporations and billionaires – no matter which party is in power. That’s left most of us behind...

"The elites have escaped justice for major financial crimes, and continue to lock into place an abusive unsustainable system threatening our lives and the planet. Things must change – dramatically, and fast."

"It’s the end of the age of oil. We’ve begun the renewable, digital age. We can and must bring a new system to life that delivers Roosevelt’s vision."

Among the celebrities and others who've declared themselves supporters of the new People's Party have been actress and UNICEF Goodwill Ambassador Susan Sarandon; author and Time Magazine Person of the Year Rose McGowan; NFL Los Angeles Chargers running back Justin Jackson; Harvard professor Dr. Cornel West; and comedian Jimmy Dore, according to the party's website.

An article in the UK's Guardian newspaper on 29 Aug, 2020 reported that more than 12,000 people had signed up to attend an online "virtual convention" of the Movement for a People's Party the following day, which it noted would feature "the Hollywood actor and activist Danny Glover and the former Minnesota governor and professional wrestler Jesse Ventura, as well as two of the more quixotic Democratic primary candidates, Mike Gravel and Marianne Williamson."

The article went on: "[The virtual convention's participants] will vote on forming a new political party 'free of corrupt money and influence' to run candidates in the congressional midterms in 2022, and for president in 2024.

"The convention revives an evergreen debate on the left: whether to follow the likes of Congresswoman Alexandria Ocasio-Cortez of New York and reform the Democratic Party from within, or to conclude that it is irredeemably beholden to corporate interests and walk away to create something new."

More in this category: « AARO expat survey: U.S. expats struggle even more than folks back home to save for retirement FATCA critics warn lawmakers over plan to compel U.S. banks to report Stateside clients' account data »