The Democrats Abroad has announced that it has joined the Residence-Based Taxation Coalition, a lobbying organization launched in January with a single goal: persuading U.S. lawmakers to move the U.S. to a residence-based tax regime, like most of the rest of the world's countries have.

The Democrats Abroad's decision to join the Washington, DC-based RBT Coalition comes at a time when the idea that moving to a residence-based tax system would address many  – though not all  – the issues American expatriates are currently struggling with has become widespread among those organizations advocating on behalf of U.S. expats.

News of the Dems Abroad's new RBT Coalition membership was unveiled in a posting on the Democrats Abroad's website on Thursday by DA Taxation Task Force chair Carmelan Polce.

In the posting, Polce wrote that DA was "pleased to announce" that it has joined the RBT Coalition, "adding our name to a non-partisan list of organizations, individuals and entities who support a switch from our current system of citizenship based taxation to residency based taxation, also known as RBT.

"Of all the Americans abroad issues, taxation is THE issue that impacts every single one of us," Polce added.

"It affects young and old, married and single, regardless of economic status and party affiliation.

"We believe that this growing community of RBT advocates and activists will demonstrate to Congress the enormous demand for tax fairness for Americans abroad, and persuade them to work with us on a workable RBT implementation model."

Polce then goes on to list some of the reasons RBT is needed, including the fact that "U.S. taxation causes serious personal and financial problems for Americans who live and already pay tax in another country (or countries)"; the fact that the U.S. tax code currently contains "two dozen provisions that discriminate against Americans abroad", some of which cause "serious barriers to banking, saving and investing"; and the "unbelievably complicated" nature of filing taxes from abroad.

In addition, there are such policies as FATCA (Foreign Account Tax Compliance Act), which she notes were "designed to catch criminals like tax cheats and money launderers" but which in fact "cause real pain for ordinary, law-abiding, working class Americans abroad," along with the fact that "there are "no IRS agents abroad"; "no dedicated, toll-free helplines accessible from any country in the world and operated by IRS agents with specialist knowledge of the unique filing issues we face", nor any "programs for low-income and elderly Americans [abroad], providing free e:filing and free tax preparation support from qualified volunteers."

As of today, there are some 14 member organizations, according to the RBT Coalition's website, not including the Democrats Abroad.

The entities that have joined since January include the Adrian Leeds Group; American Families United; the American International Club of Rome; AmCham Abu Dhabi; AngloInfo; and the Expat Exchange. 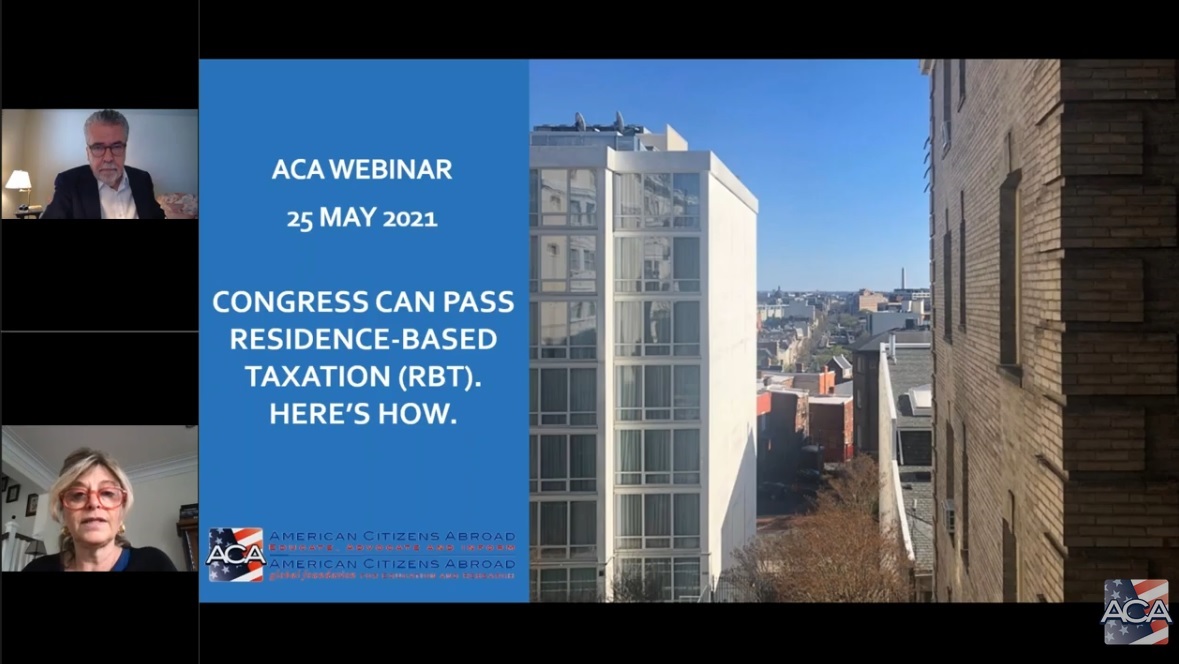 The American Citizens Abroad, which is one of the RBT Coalition's first member organizations and like it is also based in Washington, DC, has been calling on Congress to move the U.S. to RBT for years, and in May of this year, sponsored a webinar on the topic, which is still available to view on YouTube.

The eleven slides that accompanied that presentation are still available on the ACA's website, and may be viewed by clicking here.

In April, the ACA's sister organization, the ACA Global Foundation, announced a fund-raising campaign to pay for fresh research aimed at helping it and other RBT advocacy groups to be able to back up their arguments in favor of moving the U.S. to a residence-based taxation system.

ACA legal counsel Charles Bruce explained at the time that research into RBT that the organization had paid a consultancy in 2017 to carry out ideally should be revisited now. The results of that research, carried out by the non-partisan, Washington, D.C.-based District Economics Group (DEG), may still be found on the ACA's website, where it includes a 10-page "side-by-side analysis" of the two taxation systems.

Also campaigning in favor of a residence-based approach to taxation is SEAT (Stop Extraterritorial American Taxation), an advocacy group formed last October. In July, one of its founders, Australia-based founder of the Fix the Australia/US Tax Treaty website, Dr. Karen Alpert, wrote a piece, published here, addressing the issue.

Why the U.S. has a
citizenship-based regime

The reason the U.S. is, famously, the only country in the world besides Eritrea that has a citizenship-based tax regime dates back to the early months of the American Civil War, when it was enacted in order to prevent wealthy people from ducking their military and civic obligations by fleeing the U.S. during a time of crisis, as the Wall Street Journal noted in 2012.

That was the year when the subject of America's CBT regime hit headlines after news broke that Facebook co-founder Eduardo Saverin had renounced his U.S. citizenship before the company went public, thereby enabling him to mitigate his exposure to certain taxes.

"In 1864, the tax was expanded to include income from all sources, no matter where generated," the WSJ article continued.

"Scholars say this happened as the proud sense of being a citizen of the U.S. – with all its opportunities and obligations – first flowered out of the battlefields.

"That model of citizenship-based taxation has remained in the U.S. law ever since, even as the rest of the world has gravitated to a different model, one that simply considers where the taxpayer is living at the moment."

2012 was also when Americans around the world were beginning to discover that as a result of the Foreign Account Tax Compliance Act, signed into law in 2010 by President Obama, their financial life would never be the same again, even though FATCA had yet to come into force (this happened in 2014).

Because the law, which was aimed at ensuring Americans didn't use overseas banks to avoid U.S. income taxes, obliges non-U.S. financial institutions to report to the U.S. authorities on all of their "U.S. person" account-holders, with significant penalties for institutions found not to do so, the first thing many institutions did was to simply stop allowing Americans to maintain accounts – and asking those who had them to take their assets elsewhere.

The problem of banks and financial institutions being unwilling to have American expats as clients, including, in some cases, overseas operations of American companies, continues to be a major problem for Americans.

To read the WSJ article on the history of America's CBT, click here.

ACA in drive to fund update of residence-based taxation research, ahead of perceived need

OPINION: The SEAT approach to residence-based taxation: 'Begin with the end in mind'