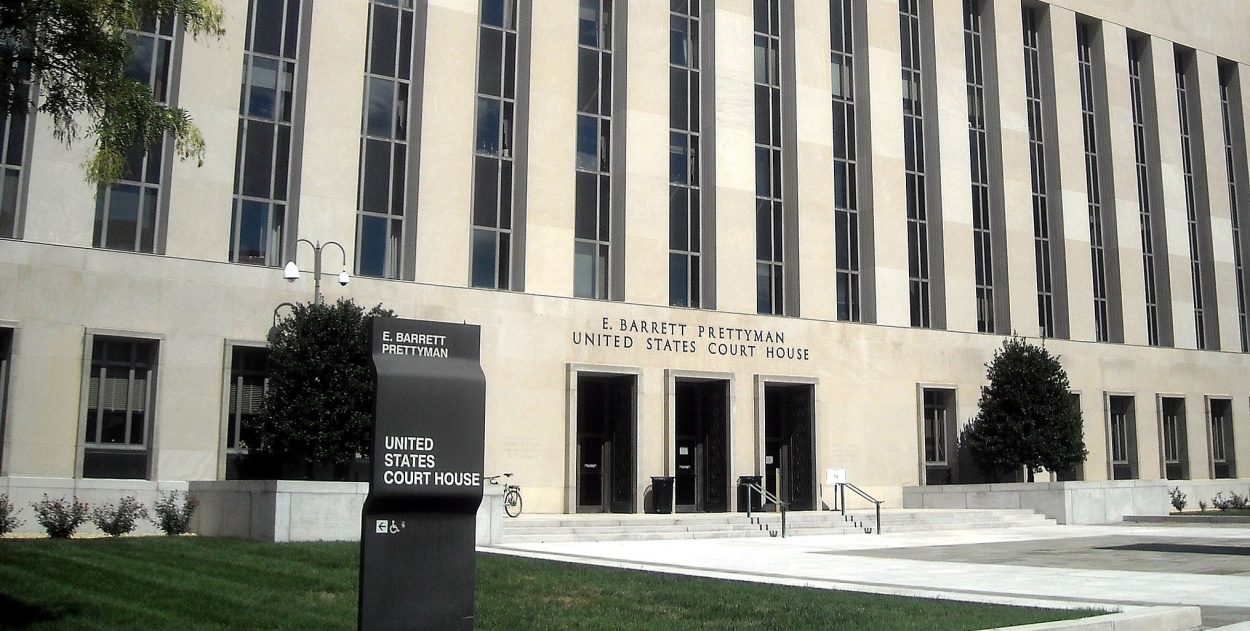 ...as a Gambian presidential candidate says her disqualification from running was due to difficulties in being able to renounce her U.S. citizenship

The Paris-based Association of Accidental Americans on Monday filed a fresh complaint against the U.S. State Department, this time alleging that the continued suspension of voluntary expatriation services in U.S. embassies and consulates around the world was a violation of the U.S. constitution.

The AAA's latest legal action comes a little more than two months after the organization announced that it was planning to crowd-fund a fresh complaint against the State Department over the difficulties dual citizens around the world have been having in their efforts to renounce or relinquish their U.S. citizenships, owing to the continued closure of U.S. embassies and consulates, allegedly due to the Covid pandemic.

It has had an earlier action against the State Department underway since last December, when, along with 20 individual accidental Americans of 10 different nationalities, it filed its first complaint against the State Department, in which it and its co-plaintiffs alleged that the US$2,350 fee that the U.S. currently charges those wishing to renounce their American citizenship "violate[s] the U.S. Constitution and international law".

Since that complaint was filed, the State Department has twice asked the judge in the matter to dismiss it, on grounds that the AAA had failed to sufficiently make their case.

Yesterday's news that the Association of Accidental Americans (AAA) had filed a new complaint coincided neatly, meanwhile, with reports out of the West African country of Gambia that detailed how what one paper one referred to as that country's "only female presidential aspirant" had been disqualified the previous day from running for the top office by the county's electoral commission – on grounds that she held a dual citizenship, which the country's election rules don't permit – and that it was an American one.

And, according to an article in The Point, a Gambian newspaper, would-be presidential candidate Marie Sock declared that she had been seeking to renounce her citizenship repeatedly since last year, via the American Embassy in Gambia, but that "because of the Covid-19 pandemic, the US Embassy was not conducting any services except in emergency cases”.

"She explained that she contacted the embassy again, as she felt her situation was qualified as an emergency case, but was told that the embassy was undergoing renovations and they couldn’t grant her request," the article, headlined "Marie Sock blames US Embassy for delay in renouncing US citizenship," continued.

It quoted her as adding: "They did not consider the matter a priority. I have been asking for further updates without any resolution. I have not been able to arrange a meeting for some reason. The officials at the embassy were not available to grant me a meeting."

In a statement issued on Monday, the AAA said that it, and the nine individuals who are joining the advocacy organization as plaintiffs in the case against the State Department, are alleging that the U.S. authorities cannot, in good faith, argue at this point that it is continuing not to resume the offering of renunciation services at U.S. embassies and consulates around the world solely because of concerns that to do so might contribute to the possible spread of Covid-19.

"In fact, many U.S. missions have recommenced providing non-immigrant visa services for foreign nationals, while at the same time continuing to suspend renunciation services for U.S. citizens," the AAA noted, in its statement.

"The plaintiffs argue that in so doing, the U.S. government is discriminating against its own citizens in favor of non-resident aliens, making a mockery of American citizenship."

Moreover, they claim, "even in the rare cases where a U.S. embassy or consulate has not formally suspended renunciation services, applicants are still forced to wait months just to schedule an appointment to take the renunciation oath.

"During all this time, plaintiffs and others similarly situated are being forced against their will to remain U.S. citizens, in violation of their Fifth Amendment Due Process rights."

Asked for a comment, a spokesperson for the State Department said it had a policy of not commenting on pending litigation.

AAA founder and president Fabien Lehagre said in a statement that U.S.citizens living outside of the U.S. are increasingly having to cope with "heavy burdens" caused by "FATCA and other related laws," leaving so-called accidental Americans in particular "with little choice but to renounce" their U.S. citizenship.

“Accidental Americans” are individuals who are considered by the U.S. to be American citizens because (in most cases) they happened to have been born in the States, but then went on to live the rest of their lives as full, tax-paying citizens of another country.

"The government has already illegally burdened exercise of the right to renounce by imposing a record-high US$2,350 fee as a precondition to exercise this right [to renounce]," Lehagre, pictured left, added.

"My organization is currently challenging this fee in federal court.

"Now, the U.S. government is placing additional restrictions on renunciation by indefinitely suspending the services required to effect renunciation."

On Tuesday, those visiting the U.S. Embassy in France's website in search of information about renunciation services were told: "Due to Covid-19, renunciation services are suspended until further notice. We apologize for the inconvenience." The wording on the U.S. Embassy in the UK's website was different, but the general message was the same: "The U.S. Embassy London is currently unable to accept appointments for Loss of Nationality applications. We cannot provide a timeframe for when this service will fully resume, but we will update this website as information becomes available.

"Please do not email documents or send by mail until normal services resume."

John Richardson, a Toronto-based lawyer who specializes in helping American expats with their renunciation and other citizenship issues, said that while obtaining renunciation appointments "continues to be a problem in Europe and many other countries in the world," a few countries have reopened their doors, including Canada, where he says offices have reopened "in Toronto, Montreal, Ottawa, Vancouver and Calgary."

"I know individuals who currently have renunciation appointments at all those locations," he added. "They appear to be prioritizing those who were already in the system before the lockdown. But I'm aware of some people who have been able to get appointments even though they first requested them after last March."

"There is nothing in the Immigration and Nationality Act that would prevent renunciation appointments being done by video-conferencing," he said.

"These days, even Canadian citizenship ceremonies are taking place via video.

"That this has not been done, or even proposed, begs the question, 'why not'."

The AAA and its fellow plaintiffs in the matter are being represented by L. Marc Zell and Noam Schreiber of Zell & Associates International Advocates, LLC. Of the nine individuals who are participating in the legal action, four are from France, and one each from Singapore, the Netherlands, Germany, Finland and Switzerland.

Other foreign politicians whose efforts to renounce made headlines

Would-be Gambian presidential candidate Marie Sock isn't the first dual citizen of another country as well as the U.S. whose struggle to renounce their citizenship has made headlines. For non-American politicians in particular, possessing the passport of another country typically doesn't look good, and many countries require anyone looking to hold a public office to be citizens only of that country.

As reported here in August, 2019, for example, a Sri Lankan candidate for that country's presidency, Gotabaya Rajapaksa, went public with his frustrations at the time it was taking for his U.S. citizenship relinquishment to come through, after his name failed repeatedly, he said, to appear on the U.S. government's quarterly list of individuals who supposedly had renounced their citizenship during the previous three-month period.

Rajapaksa, a former Secretary to Sri Lanka's Defence Ministry and a retired Sri Lanka Army officer, had picked up his American citizenship while in the U.S. in 2003. His name wasn't on the next quarter's list either, but it finally appeared in May 2020, on the list containing the first quarter of that year's list of renunciants (and Green Card relinquishers). By this time he had already been elected president, and remains so today.

Also in 2019, while campaigning as the Canadian Conservative Party's candidate to unseat Justin Trudeau as prime minister, Conservative Party chairman Andrew Scheer insisted that he was in the process of renouncing his American citizenship, which he had acquired as a result of his father having been born in the United States. (Months later, having failed to win the election and having announced plans to step aside as his party's leader, the Canada-born Scheer disclosed that he'd changed his mind, and would keep his U.S. passport for "personal reasons".)

Meanwhile, also in 2019, after it emerged that a Kenyan woman who was a dual U.S./Kenya citizen had been told she'd have to relinquish her American citizenship in order to take up her appointment as Kenya’s ambassador to South Korea, the issue moved to the U.S., where an expat Kenyan organization sought to speak out on her behalf.

The most famous non-U.S. politician to renounce his American citizenship recently was the UK's current prime minister, Boris Johnson, who did so in 2016, but not because he had to, as British politicians are allowed to be dual citizens, and many are, including several British/American members of Parliament.