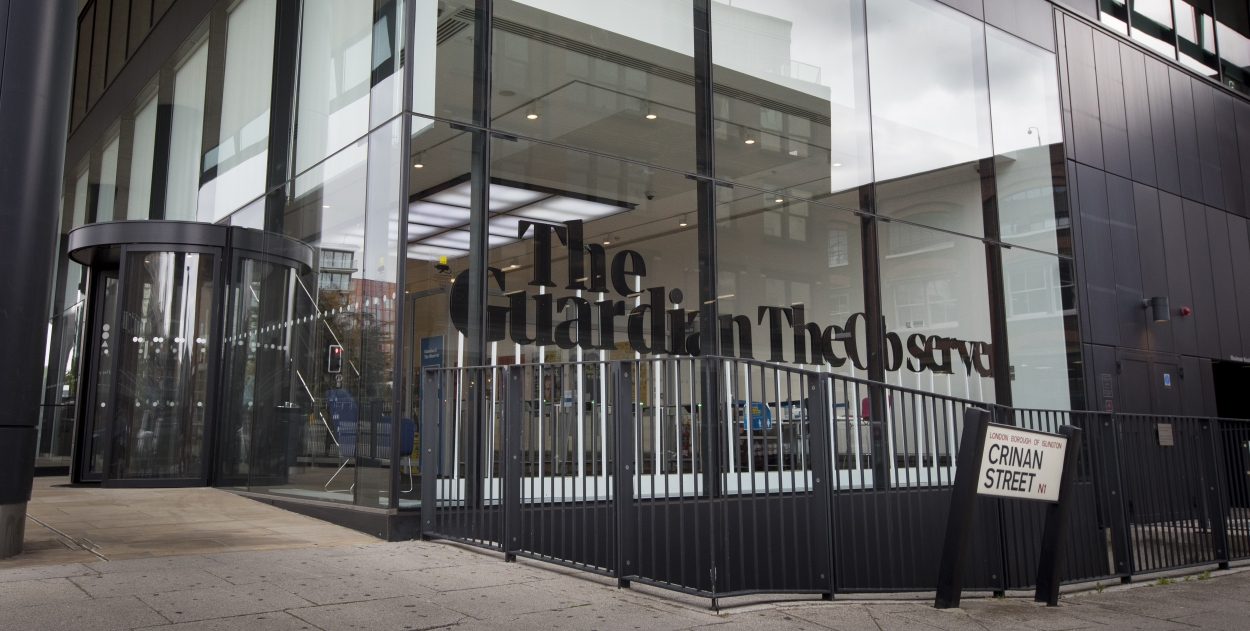 A Guardian article about a growing backlog of American expats around the world who would like to give up their U.S. citizenships, but haven't been able to since the pandemic struck in March 2020, has gone global, not just on social media, but on the pages and websites of other publications as well, since it was first published online on Dec. 31.

To judge by the accompanying outpouring of social media commentary, the Guardian article is being seen by many of these trapped expats and other overseas-resident Americans as having shone a powerful spotlight on an issue that so many of them have been struggling with – as well as, they say, on the reasons so many are so eager to give up their U.S. citizenship, in spite of its conventional image as one of the world's most desirable.

The Guardian is a London-based, non-profit news organization that has its roots in a Manchester England newspaper founded in 1821, but which has been expanding its online news coverage in recent years to include Australia and the U.S. 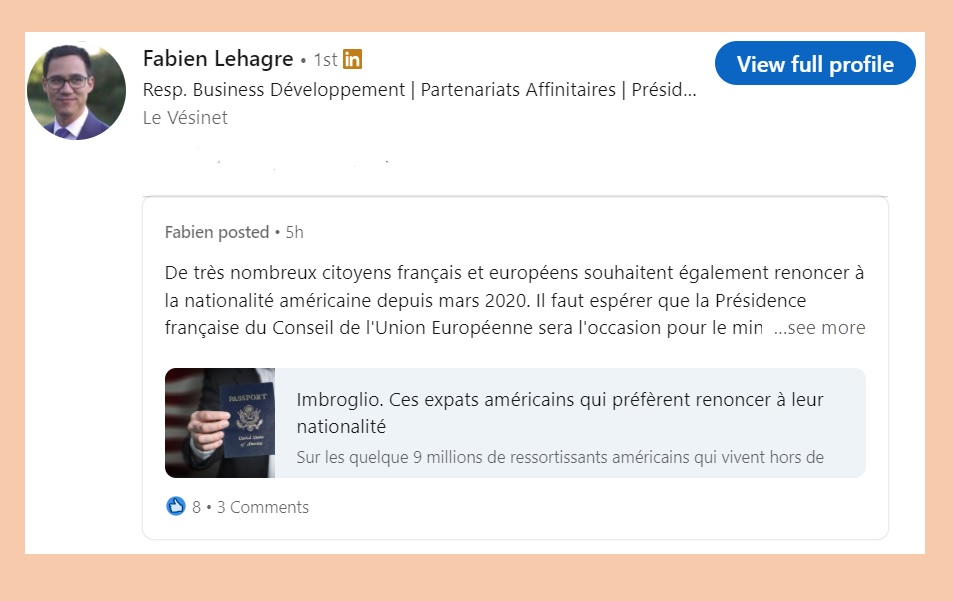 A Guardian News & Media spokesperson told the American Expat Financial News Journal on Monday that the story on the U.S. citizenship renunciation backlog had attracted "hundreds of thousands of readers" as it was being "widely shared across social media platforms" (see images left and below, right), as American expats and 'accidental Americans' – those citizens of other countries who are considered to be Americans because they were born in the States, or had an American parent – posted links to it, or to stories based on it, often adding comments of their own in the process.

Over the weekend, the article had been among The Guardian website's "Most Popular" stories.

Among the numerous media outlets to publish articles based on the Guardian's story thus far have been Newsweek, the U.S. magazine and news website; Telemondo, a major U.S.-based, Spanish-language television channel owned by NBCUniversal;  CourierInternational.com, a Paris-based, French-language news aggregation site; the website of Press TV (PressTV.ir), a Tehran-based English-language television network; and WenWeiPo.com, a Chinese news website based in Hong Kong. 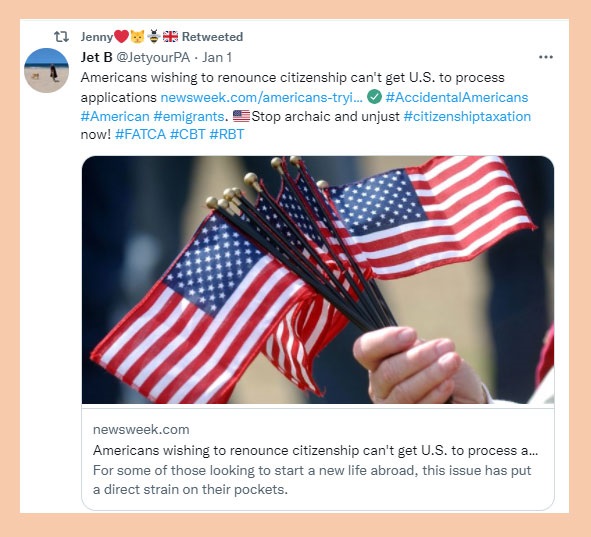 Even a U.S. local news website with readership bases in California, Florida and Texas, called the East County Gazette, picked up the story.

On Jan. 5,  HonkNews.com, a New Delhi-based, English-language news website, posted its version of the story.

The Guardian's article was written by Ed Pilkington, a New York-based journalist, and begins by telling the story of an American who is referred to only as "Michael," who Pilkington quotes as saying that in 2020, decided that he wished to "break the ties that officially bound him to a country whose values he no longer recognized" – only to find himself, "along with thousands of other U.S. citizens living abroad, caught in a Kafkaesque trap."

The problem, Pilkington goes on to explain, is that U.S. citizens are obliged to undergo a face-to-face interview with a U.S. government official as part of the renunciation process, and once the coronavirus pandemic began to take hold last year, U.S. officials regarded it as "too risky" to be permitted.

As a result, even the U.S. Embassy in London, "the largest of its sort in western Europe," says on its website that it is " 'currently unable to accept appointments for loss of nationality applications' and is unable to say when services will resume," the article continues.

"Delays have led to a growing mountain of disgruntled citizens.

"By some calculations, there may be as many as 30,000 people among the 9 million US citizens living abroad who would like to begin the renunciation process but can’t."

As an example of the inconveniences being caused by the inability of dual citizens to give up their U.S. citizenships, Pilkington cites the case of Marie Sock, "the first woman to stand as a presidential candidate in the Gambia," who, as reported, was forced to pull out of the race after she was unable to give up her American citizenship in time.

Pilkington's article also mentions in passing the lawsuit that the Paris-based Association of Accidental Americans is bringing against the U.S. State Department, in an effort to force it to make it easier for dual citizens around the world who wish to give up their U.S. citizenships to be able to do so.

As reported, the AAA, along with 20 individual "accidentals," filed its original complaint in December of 2020, alleging that the US$2,350 renunciation fee was unconstitutional and a violation of international law. In November, it followed this up with a second legal challenge, again alongside nine individuals who joined it as co-plaintiffs, alleging that the continued suspension of "voluntary expatriation services" by U.S. embassies and consulates around the world was also unconstitutional.

Pilkington's quoted estimate of a backlog of 30,000 Americans interested in relinquishing or renouncing their citizenships will not have been supplied by the U.S. government, which doesn't provide such data.

Indeed, as this publication and others have reported in recent years, questions have long been asked about how many Americans are giving up their citizenships each year, since the numbers most people refer to are based on lists of renunciants' names that are published in the Federal Register at the end of each quarter.

Although originally said to include just the names of those who renounced in the just-ended three month period, for some time it has been known that an individual's name could take a year or more to appear on the list; and the 2020 year-end total was reported to be the largest ever, in spite of the fact that, as Friday's Guardian story points out, renunciations effectively stopped taking place in March of that year.

What's more, as the AXFNJ reported in November, as many as 478 of the 977 names that appeared on the Federal Register's Q3 list for 2021 may have already appeared on earlier lists –  as may have as many as 583 of 2020's "record number" of 6,705 renunciations, according to an already-renounced, Europe-based American, who requested anonymity.

The Guardian Media Group recently marked its tenth year covering the U.S. market, where it claims to be a unique entity owing to the fact that it is owned by a trust, which means that any financial gains it realizes are reinvested in its journalism rather than being distributed to owners or shareholders.

Although it invites its online readers to "subscribe" or "contribute" to keep it going, The Guardian has also remained paywall-free until now.

In the U.S., the Guardian Media Group has bureaus in New York, Washington, DC., New Orleans, Louisiana and Oakland, California, and U.S. readers are now said to account for 30% of the company's total online traffic.

To read Pilkington's article on The Guardian's website, which is headed "Americans seeking to renounce their citizenship are stuck with it for now," click here.