American expats who tuned in last to last week's House Ways and Means Oversight Subcommittee hearing, in the hope of hearing IRS Commissioner Charles Rettig say something encouraging about plans to address their long-standing tax and FATCA-related issues, would have been disappointed, if not exactly surprised.

To be fair, the official topic was "Hearing with IRS Commissioner Rettig on the 2022 Filing Season."  And as is normally the case with such hearings, where the participating Congressional representatives' questions tend to concentrate on the specific interests of their local (as opposed to overseas) constituents, the focus of last week's hearing was well and truly on domestic tax issues – and specifically, on the IRS's now famous backlog of millions of unprocessed tax returns from the 2020 tax season, even as the 2021 season is well underway.

It was this topic, in fact, that Commissioner Rettig spent much of his share of the 90 minute session addressing, and to which he also devoted much of a 21-page written testimony that he submitted to the committee as part of his appearance, (which is available to download by clicking here.) 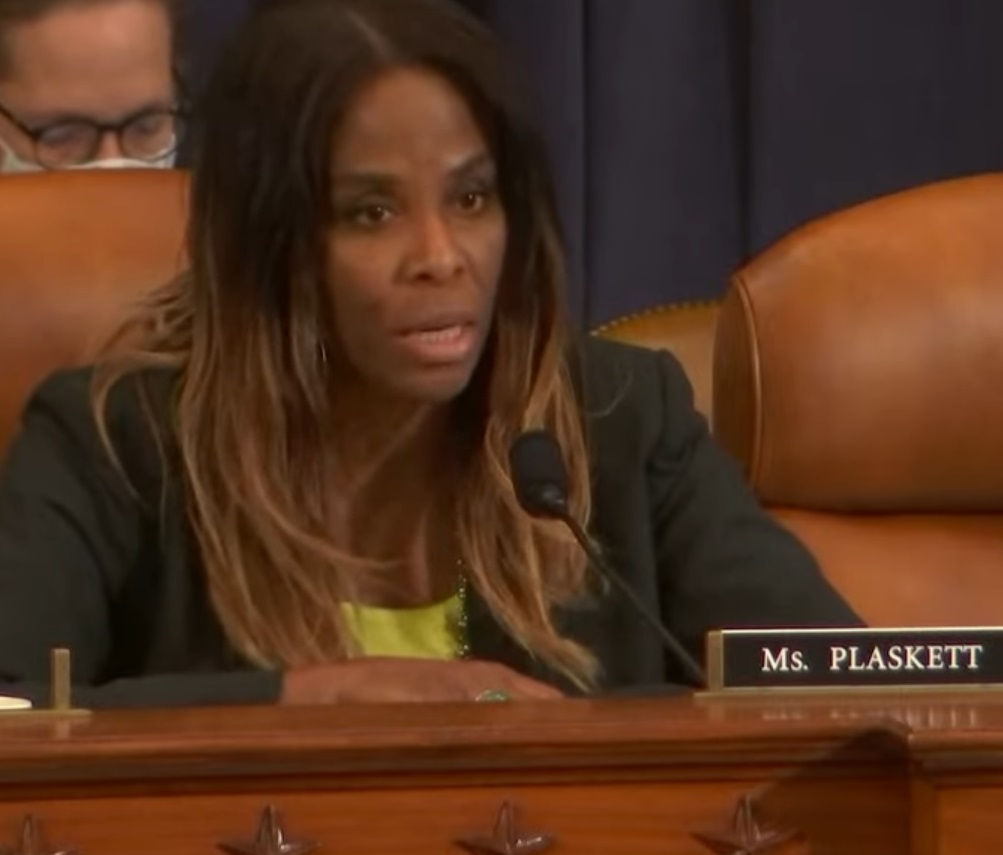 However, Oversight Subcommittee member Rep. Stacey Plaskett (pictured left), a Democrat who is the elected (non-voting) representative for the U.S. Virgin Islands, did raise an issue with Commissioner Rettig about a problem that she said some new arrivals in her jurisdiction have begun having in getting tax residency there within a reasonable time period.

(Like Puerto Rico, Guam, American Samoa and the Northern Mariana Islands, the U.S. Virgin Islands is considered a "permanently-inhabited U.S. territory" and as such, is  treated by the U.S. almost like a state. Babies born in these territories, in fact, are automatically considered to be U.S. citizens, just as they would be if they were born in one of the fifty U.S. states and District of Columbia.)

"But if I moved anywhere else in the United States, it's 122 [days]. If I moved Connecticut, I'd be considered a resident there for tax purposes after 122 days."

The result, Rep. Plaskett went on, is that there is now a significant disincentive for people who might otherwise be able to make a significant contribution to the Virgin Islands' economy "to be able to reside there."

"What support might [the IRS] be able to provide – and is the IRS looking into this?"

Rettig replied that certain U.S. states, such as California, also had 183-day (six months) residency requirements, and that, also, the writing of such laws wasn't within the purview of the IRS, so it wasn't really a question for him to answer; but he added that he thought he and Rep. Plaskett should meet up to discuss the matter properly in person at another time, which she said she'd be happy to do.

As reported, Rep. Plaskett, a former lawyer who was born in Brooklyn and educated in the U.S., was also a keen questioner of National Taxpayer Advocate Erin M.Collins  when she also testified before the House Ways and Means Oversight Committee, last month, on the subject of the challenges currently facing U.S. taxpayers.

Since last week's hearing ended, meanwhile, a brief reference to the Foreign Account Tax Compliance Act (FATCA) that Commissioner Rettig made towards the end of his written testimony has begun to be widely circulated, and in so doing, caught the attention of a number of those in the cross-border tax and information reporting industry, some of whom have taken to social media with their thoughts.

This is because, far from acknowledging the struggles such groups as so-called "accidental Americans" have been having in particular with their U.S. tax status as a result of the law, as well as the growing trend among foreign financial institutions to refuse to accept American expat clients at all because of it, in addition to mounting pressure from certain foreign governments and even a number of recent anti-FATCA rulings by such entities as the European Data Protection Board, European Banking Federation and European Court of Justice, Rettig focused instead on what he said were the difficulties the IRS has been having in enforcing FATCA.

One reason, he noted, in his comments on the 2010 legislation (on page 19 of his submitted testimony), is that the IRS has "yet to receive any significant funding appropriation for [FATCA's] implementation."

"Because of our current funding and staffing limitations across our enforcement actions, we are forced to make difficult decisions regarding priorities, the types of enforcement actions we employ, and the service we offer,” he added.

"Limited IT resources preclude us from building adequate solutions for efficiently matching or reconciling data from multiple sources.

"As a result, we are often left with manual processes to analyze reporting information we receive.

"Such is the case with data from the Foreign Account Tax Compliance Act (FATCA)."

The lack of designated resources for implementing FATCA, Rettig went on, has resulted in a situation that "is compounded by the fact that when we do detect potential non-compliance or fraudulent behavior through manually generated FATCA reports, we seldom have sufficient funding to pursue the information and ensure proper compliance.

"We have an acute need for additional personnel with specialized training to follow cross-border money flows. They will help ensure tax compliance by improving our capacity to detect unreported accounts and income generated by those accounts, as well as the sources of assets in offshore accounts."

A typical response from an expert observer who is familiar with the unintended consequences FATCA has burdened expatriate Americans generally, and accidental 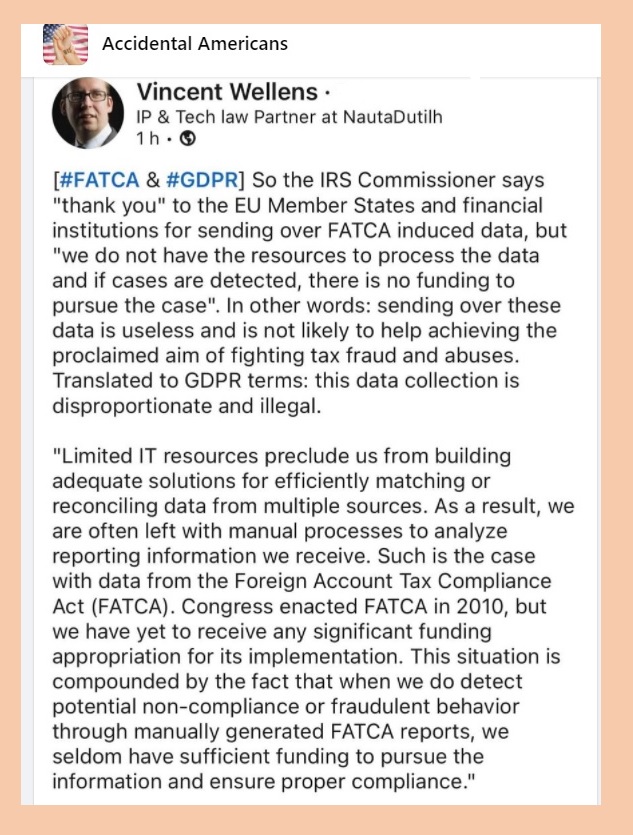 Americans specifically, was contained in a Tweet by lawyer Vincent Wellens, a partner in the Luxembourg office of the international law firm NautaDutilh, which has represented and continues to represent the Paris-based Association of Accidental Americans in a number of legal actions against certain EU governments concerning the way they implement FATCA.

"So the IRS Commissioner says 'thank you' to the EU Member States and financial institutions for sending over FATCA-induced data, but 'we do not have the resources to process the data and if cases are detected, there is no funding to pursue the case,' Wellens's tweet begins (see right).

"In other words: sending over these data is useless, and is not likely to help achieving the proclaimed aim of fighting tax fraud and abuses.

"Translated to GDPR terms: this data collection is disproportionate and illegal."

Others pointed out that when FATCA was signed into law in 2010, it was said to be as a revenue-raising element of a domestic jobs stimulus bill, known as the HIRE (Hiring Incentives to Restore Employment) Act, under the assumption that it would actually bring revenue into the Treasury, as a result of the then-hidden offshore wealth it would be sucking back into the U.S tax net.

The idea that FATCA would actually require additional funding in order to achieve its purpose of cracking down on the use of overseas financial institutions by weathy Americans to hide their money, in other words, had never been part of the plan, because if it had, it wouldn't have been included in the HIRE Act, these sources pointed out.

At the beginning of his appearance before the subcommittee, Commissioner Rettig noted that it might well be his last, as his "statutory term expires on November 12."

The hearing is still available to view, by clicking here.

Those interested in submitting written comments to be included in the hearing record are advised that they may do so, via email, addressed to This email address is being protected from spambots. You need JavaScript enabled to view it..

The submission must be in PDF format (in compliance with formatting requirements explained in detail towards the bottom of  this page) and must be received by (next) Thursday, March 31.