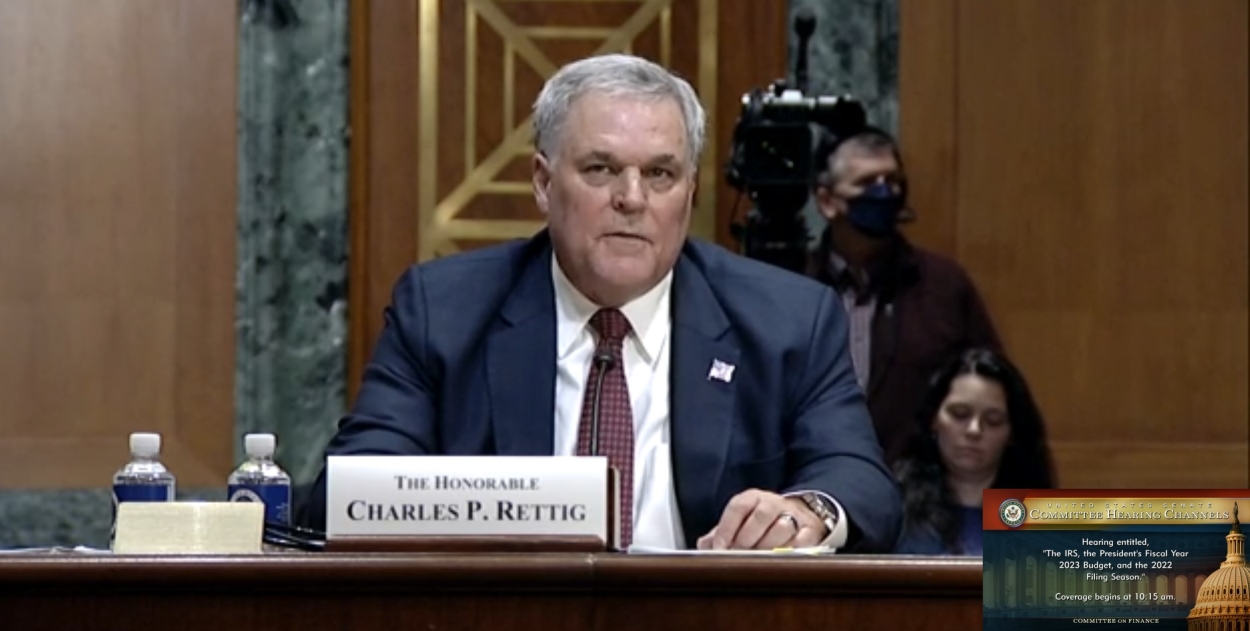 A brief statement by IRS Commissioner Charles Rettig yesterday, in support of the idea of the U.S. "reciprocating" with respect to the information it currently receives from foreign governments about the overseas bank and financial accounts of U.S. taxpayers – as a result of a 2010 law known as the Foreign Account Tax Compliance Act (FATCA) – has sparked widespread discussion and debate, particularly outside of the U.S.

Although it's said that FATCA was originally intended to be reciprocal, thus far, it's believed few if any countries actually currently receive any information from the U.S. about bank and financial accounts any of their own taxpayers might happen to have in the U.S., even though they have been providing the U.S. with such information about its taxpayers and Green Card holders since 2014.

Meantime, more than 100 countries, with the exception of the U.S. and a few others, have been automatically exchanging similar information about one another's taxpayers' accounts under an Organisation of Economic Co-operation and Development program similar to FATCA, known as the Common Reporting Standard, which came into force a few years after FATCA (2017/2018).

Commissioner Rettig's statement on FATCA reciprocity came in response to a question during an almost three-hour Senate Finance Committee hearing, on the subject of "The IRS, the President's Fiscal Year 2023 Budget, and the 2022 Filing Season," which may still be viewed in its entirety by clicking here.

A 40-second clip of Commissioner Rettig's comment may be viewed on C-Span by clicking here.

At roughly one hour and 26 minutes into the hearing, Commissioner Rettig is heard to say, when asked by Sen. Sheldon Whitehouse (D - RI) if he supported "the passage of reciprocal FATCA," that he "absolutely" did, adding: "We committed to our partners... around the world that we would pass a similar provision with respect to [reciprocity but] it has not occurred yet..

"We are receiving information from them, but U.S. institutions are not providing that information [in return].

Particularly interested in Commissioner Rettig's remarks have been members of organizations that have been calling for major changes in the way the U.S. implements FATCA, a 2010 anti-tax evasion law that forced non-U.S. banks and financial institutions to compile and report back to the U.S. on those of their accounts held by U.S. taxpayers and such other U.S. "persons" as Green Card holders.

The fact that the U.S. doesn't reciprocate with respect to FATCA – which is enforced by means of intergovernmental agreements (IGAs) the U.S. has in place with the more than 100 countries around the world that provide it with taxpayer data – is seen as significant for many reasons, including the fact that it means taxpayers of other countries can, in theory at least, stash their wealth in the U.S. without fear of it being flagged up to the tax authorities in their home countries, which it would likely be just about everywhere else, since most other countries have signed up to a global information exchange agreement that's similar to FATCA, known as the Common Reporting Standard, except that it's fully reciprocal.

Among those commenting on Commissioner Rettig's comments was Fabien Lehagre, the founder and president of the Paris-based Association of Accidental Americans, which represents a sub-group of citizens of countries other than the U.S., who have been struggling since FATCA came into force in 2014 with major bank account issues as a result of the fact that they are considered also to be American citizens, and thus taxpayers, even though they were only born there, or were born elsewhere to at least one American citizen parent. 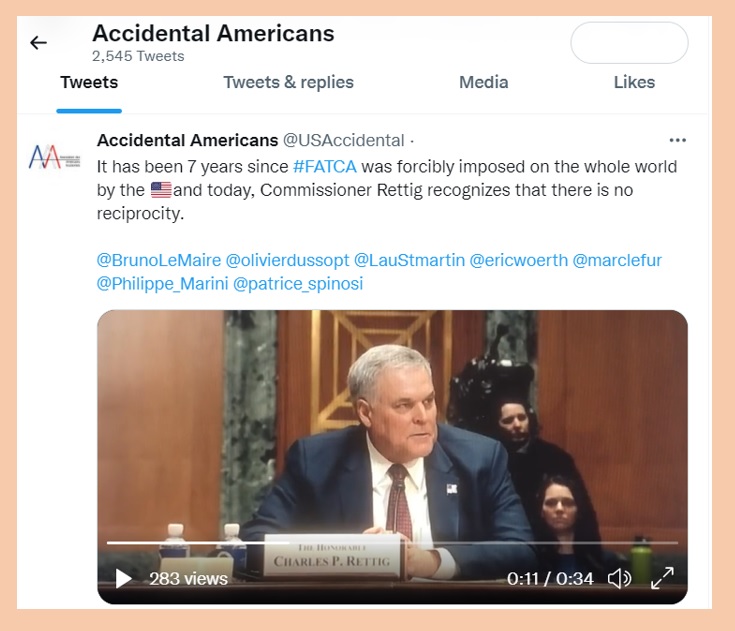 "It has been 7 years since #FATCA was forcibly imposed on the whole world by the US and today, Commissioner Rettig recognizes that there is no reciprocity," Lehagre tweeted yesterday (pictured left), and also posted on his organization's Facebook page.

Lehagre addressed his tweet to a number of French politicians, including France's Finance minister, Bruno Le Maire, who have been involved in political discussions over the last few years concerning FATCA, and how, if at all, France and other EU countries should address it.

As reported here in February, Le Maire had at that point just assured Lehagre, in a letter which Lehagre posted on his organization's Facebook page, that he remained "fully aware of the practical difficulties faced" by France's accidental American citizens, with respect to the FATCA-related problems that he acknowledged were continuing to exist.

As this and other media have been reporting over the past year or so, Le Maire's awareness of the problems facing France's accidental Americans and others as a result of the way FATCA is enforced is increasingly shared by other European politiians.

This was evident as well in an 18-page European Parliament document published back in September, which devoted several paragraphs to criticizing the  FATCA, and in particular, FATCA's "lack of reciprocity," resulting in "the United States becoming a significant enabler of financial secrecy for non-U.S. citizens" as a result.

Rettig's comments yesterday represent the second time he's raised eyebrows with comments relating to FATCA that are very different from those of most other Washington officials over the past more than 12 years that the law has been on the books.

As reported, he elicited a similar reaction during a Ways and Means subcommittee hearing, also on IRS issues, last month, when he admitted, in his 21-page prepared testimony, that in spite of all the efforts being made by non-U.S. financial institutions to comply with FATCA, the IRS had been struggling to enforce FATCA, owing to the fact that it lacked the resources, and had "yet to receive any significant funding appropriation for [FATCA's] implementation."

"Because of our current funding and staffing limitations across our enforcement actions, we are forced to make difficult decisions regarding priorities, the types of enforcement actions we employ, and the service we offer,” he added, in remarks that may be viewed  here, on page 19.

"Limited IT resources preclude us from building adequate solutions for efficiently matching or reconciling data from multiple sources.

"As a result, we are often left with manual processes to analyze reporting information we receive.

"Such is the case with data from the Foreign Account Tax Compliance Act (FATCA)."

Whether Commissioner Rettig will be able to effect any changes to the way the U.S. addresses FATCA is an open question, since he is set to leave his post on Nov. 12. His successor has yet to be named.

He, or anyone else hoping to introduce reciprocity to the way FATCA is enforced, is also likely to face stiff opposition from America's powerful banking and financial services industry, longtime FATCA-watchers point out.

"While the IRS may say it wants reciprocity, it will face fierce opposition from the American banking community, which recently killed off an attempt to introduce a Homeland version of FATCA," said Mishcon de Reya  partner Filippo Noseda, who has represented a number of clients who've sought to challenge various aspects of FATCA in court, and who has himself testified in European hearings on the law.