The U.S. Securities and Exchange Commission has unveiled charges against 16 defendants – located in the Bahamas, the British Virgin Islands, Bulgaria, Canada, the Cayman Islands, Monaco, Spain, Turkey, and the United Kingdom – whom it says had been party to "multi-year fraudulent penny stock schemes that generated more than US$194 million in illicit proceeds."

In a statement, the SEC said its investigations leading to these charges had involved assistance from securities regulators and other law enforcement authorities in more than 20 other countries, and that they were associated, "in part, with parallel criminal actions announced by the United States Attorney’s Office for the Southern District of New York."

Gurbir S. Grewal, director of the SEC’s Division of Enforcement, said the SEC is alleging that these 16 defendants had "orchestrated some of the most complex microcap stock fraud schemes ever charged by the SEC."

He added: "By locating their operations overseas, using encrypted messaging and operating through a convoluted network of offshore accounts, the defendants hoped to avoid detection of the massive frauds we allege they perpetrated on US markets and investors.

"However, investigative teams from three SEC offices doggedly kept on their trail, working across borders, and ended this alleged global scheme."

The SEC’s complaints, filed in the United States District Court for the Southern District of New York, charge all of the defendants with violating the antifraud and registration provisions of the federal securities laws.

According to the SEC', the charges against the 16 defendants are contained in three separate complaints. These, it says, "allege that several defendants played a variety of roles to accumulate the majority of shares in penny stocks via difficult to unveil, offshore nominee companies.

"It is also alleged that some of the defendants frequently used encrypted text and phone applications to avoid detection by regulators, and arranged to buy and sell penny stocks from multiple offshore accounts, in furtherance of the fraud."

According to the SEC's complaints, once some of the defendants had amassed a significant majority of the shares of the stocks, certain of the defendants then "secretly funded promotional campaigns to promote the stocks to unsuspecting investors in the United States and elsewhere.

"As alleged, when those campaigns triggered increases in the demand for and price of the stocks, some of the defendants sold the stocks via trading platforms in Asia, Europe and the Caribbean, for significant profits."

On the emergency applications, the Court issued orders on April 12 and April 15  that froze and called for repatriation of the assets of six of the defendants.

To view the SEC's statement in full, click here. 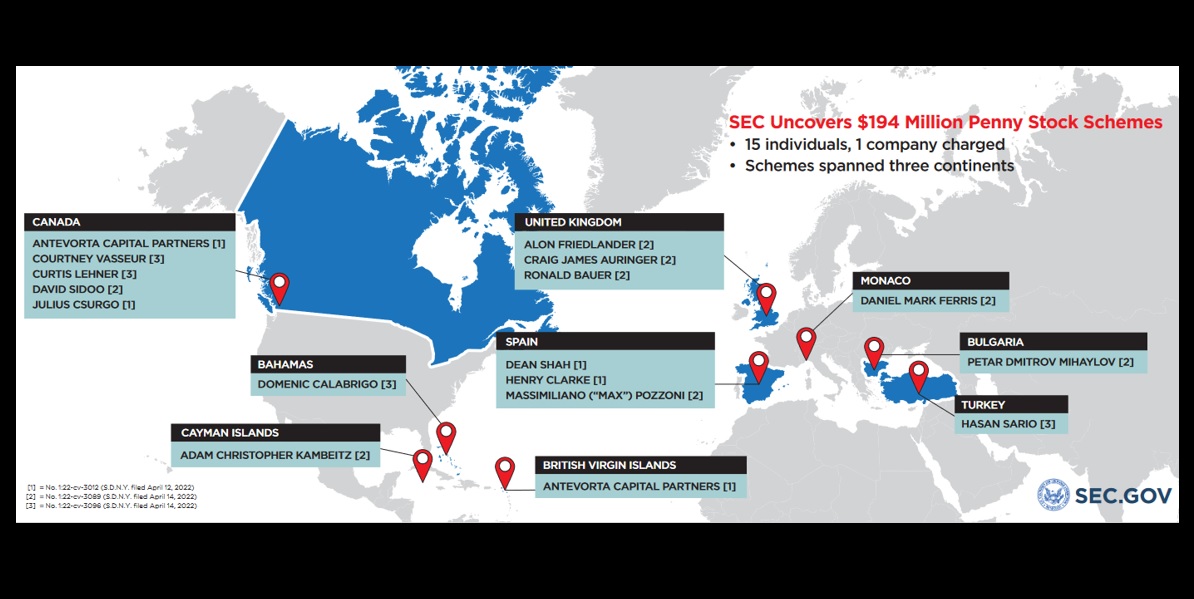