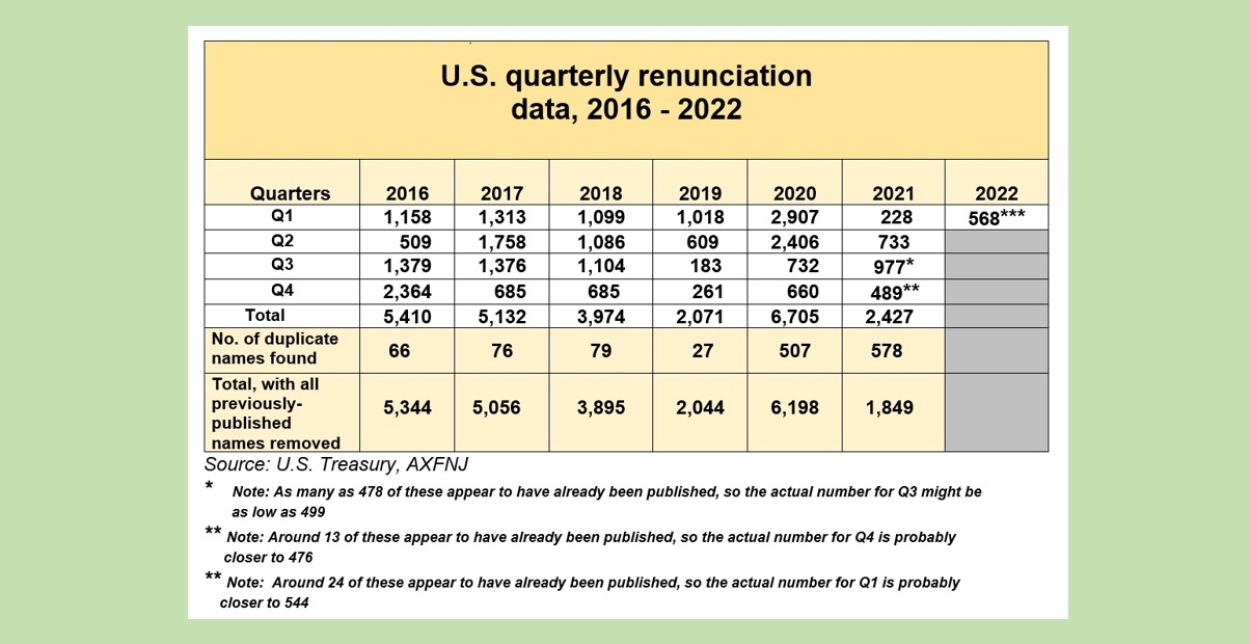 More than 500 names have appeared on the U.S. government's latest list of Americans who have, as the Federal Register (where the names appear) puts it, chosen to expatriate," a relatively low quarterly number, given that only four quarters in the past six years have contained fewer names. (See table, above.)

As has been the case since 2020, the relatively lower number of names is seen to reflect the fact that many "Loss of Nationality' offices in U.S. embassies and consulates around the world remain closed, including those in London, Edinburgh and Belfast.

Once again, 24 names on the latest list appear to have shown up on previous lists, according to a Federal Register list-watcher based in Europe, who requested anonymity, whose own name has thus far appeared twice, thus prompting his interest in the phenomenon.

This would mean the actual total for the first three months of 2022 would be 544 names, rather than 568.

As regular AXFNJ readers know, in the absense of other publicly-available data from the government, these quarterly Federal Register lists are closely monitored by many citizenship advisers and others in the American expat community, as well as by many of those who are currently in the process of renouncing their citizenships. This is because the appearance of their names on one of the Federal Register's lists is seen as proof that the process has at last been completed.

As reported here last year,  the fact that the Federal Register has been publishing the names of some individual renunciants more than once was first spotted with the publication of the Q3 2021 list, when 977 names were published, of which as many as 478 may have been the names of the same person being published again. As was noted at that time, while it wouldn't be surprising for two people with the same name to renounce their U.S. citizenships within the same six-year period if their name was relatively common, many of the names that have shown up more than once on the Federal Register's "doxing" list were considered unlikely to belong to more than one American. (The examples given were Bastiaan Van Domselaar and Hedwich Vlieg.)

("Doxing" is a slang term favored by many expatriating Americans when referring to the Federal Register's quarterly list, and is usually defined as the act of having one's personal information publicly revealed, typically in an online context.)

The AXFNJ has emailed the U.S. Treasury Department's press office to find out why the Federal Register's list of names is including names of people that have appeared previously, and if there are any plans to stop this from happening going forward.

According to sources in various countries, renunciations are taking place everywhere that they are able to be accommodated – which is still not yet in certain countries, such as the UK (as noted above) and Australia.

U.S. Loss of Nationality operations are about to resume in France, sources say, while renunciations are again taking place in Canada, France, Italy, the Czech Republic, Armenia, Indonesia and Hong Kong – although "some of these may depend on whether you are a resident of the country," says John Richardson, a Toronto-based lawyer and citizenship expert whose work includes helping expatriate Americans to renounce.

Richardson adds that he himself seems to be "getting more and more inquiries" about renouncing, and adds that his impression, from what he's hearing, is that the actual numbers renouncing are "far higher" than the latest Federal Register data suggests, although he notes that it's long been known that the data on those lists is often as much as a year or more old.

"My sense is that people are renouncing because they are realizing that changes to the expat tax regime and so on are not going to happen in a time frame that works for them, and that they have no choice but to renounce in order to gain control over their lives.

"Once again, it's impossible to know what the latest numbers actually mean; I suspect that there really were far, far more than the 568 renunciants reported in the first quarter."

Richardson pointed to a recent response by the U.S. government's lawyers in connection with a legal challenge seeking to make renunciation easier and less expensive, which is currently underway in Washington, D.C, in which, he said, the government had sought to refute claims that renunciations were being made impossible by claiming that "at least a few hundred had recently renounced in Switzerland alone".

The Federal Register's quarterly list of names dates back to the 1990s, when it was introduced during the administration of President Bill Clinton, at a time of heightened concerns about certain wealthy individuals giving up their U.S. citizenships.

The legislation that brought what came to be known by some as "the name and shame list" into being was formally introduced in April, 1995 by a Florida member of the House of Representatives named Sam Gibbons, who was the senior ranking Democrat on the Ways and Means Committee at the time, according to contemporary reports of the Federal Register list's origins.

As the latest renunciation data suggests, this strategy would seem not to have been terribly successful, as the financial reporting obligations placed on Americans resident outside of the U.S., who normally are also expected to pay taxes in the countries in which they now live, have grown steadily more intrusive and costly to comply with, and the incentives for expatriating, for some, outweighted the "shame" of their names being on the list.

Meantime, although the wealth of the names on the list isn't given, it's believed that most of those renouncing at the moment are not wealthy, and in fact, the cost of renouncing if someone has US$2 million or more in assets is such that many wealthy-ish expats say they can't afford to renounce.

For decades it didn't cost anything to renounce; then, in 2010 it was set at US$450, as the anti-tax-evasion law known as FATCA was signed into law, and it was hiked again, to US$2,350 in 2014. Wealthy Americans, as noted above, are expected to pay an exit fee, based on their current assets.

Below is a table showing how the numbers of Americans renouncing their citizenships increased after 2010. 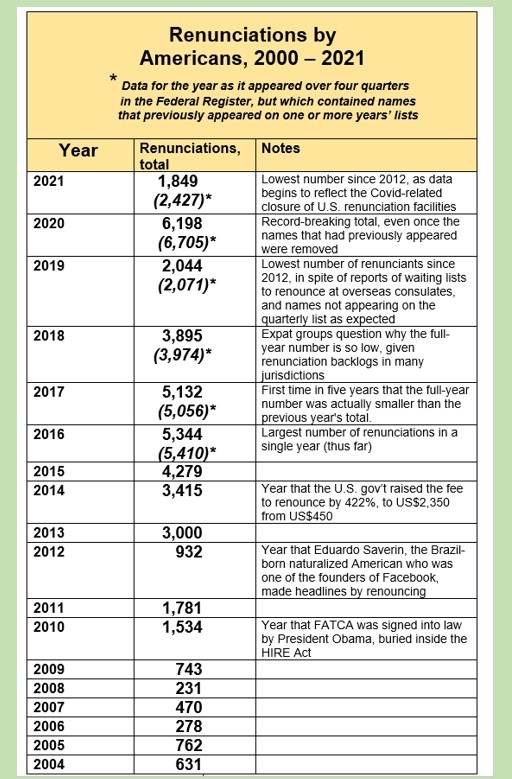 
Editor's note: Since this story was written, a number of U.S. embassies and consulates have re-opened their renunciation-processing offices, including those in London and Paris. See U.S. citizenship relinquishment services return to UK, France by clicking here.

More in this category: « Major ACA/DEG analysis finds U.S. move to residence-based tax regime 'could be revenue-neutral' Tax and financial planning webinars & other events on offer during May, June 2022 »