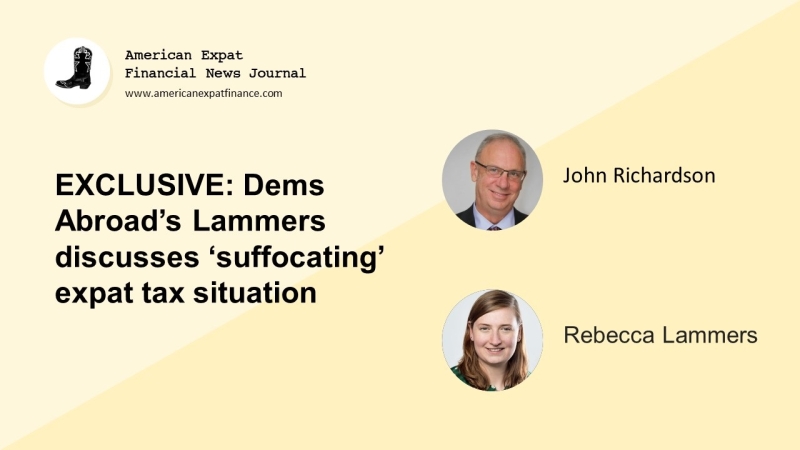 In 2010, when President Obama signed the Foreign Account Tax Compliance Act into law – hidden inside a domestic jobs bill few still remember, called the HIRE Act – Rebecca Lammers had been only been living in London for a few years, although she'd done a couple of semesters of college abroad (in Ecuador and London).

And as she told me the other day, it wasn't until 2016 that she began to become "politically aware," when she voted in the UK's Brexit referendum as well as the U.S. presidential election. "Both times it did not go the way that I voted, or the way that I wanted things to go," she went on, referring to to the UK's decision to leave the EU, and the election of Donald Trump to the White House.

"So I started going to Democrats Abroad events here in London."

Fast-forward five years, and it's safe to say Lammers has certainly left her mark on the overseas arm of the Democratic Party, in addition to making many more fellow expatriates around the world aware of the major tax issues they're facing.

Earlier this year, she was chosen to succeed Paris-based American expat campaigner Laura Snyder as the IRS’s sole overseas member of a grass-roots voluntary organization known as the Taxpayer Advocacy Panel, where her term runs until the end of 2024. (There are 68 TAP members who represent Stateside U.S. taxpayers.)

A few months before, she'd been named chair of the Democrats Abroad's Taxation Task Force – the DA group that, as reported here earlier this week, just released a major (and, it was said, "damning") report on what life is like, from a financial and tax perspective, for the millions of American citizens who live overseas.

It's important to note here that Lammers wasn't the only one involved in writing this report, but one has the sense that she played a major role in conceiving it and fine-tuning it, ahead of its publication.

Certainly she had some interesting thoughts about it, as well as about some of the other issues that many expatriate Americans deal with, when we spoke yesterday.

To listen to my interview of Lammers, via the American Expat Financial News Journal's YouTube channel, click here.

To read about the DATTF's just-released report, entitled Once Uncomfortable, Now Suffocating: A 2022 Update on Tax and Financial Access Issues of Americans Abroad, click here.

More in this category: « You really know you’re an American expat when… AXFNJ Podcast: Dubai private asset manager for U.S. expats Vince Truong explains why everyone needs ‘a financial roadmap in place’ »