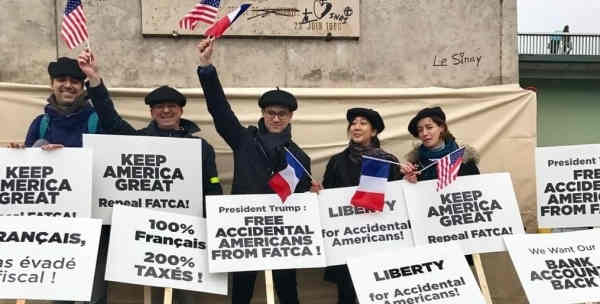 Fabien Lehagre, center, during a demonstration last November, beneath a a scale replica of the Statue of Liberty on the Île aux Cygnes (Isle of Swans) in Paris

For the past four years, U.S. born, France-resident and French-speaking Fabien Lehagre has been fighting a tireless and increasingly hard-to-miss battle on behalf of all of France's and Europe's "accidental Americans"...

Some expat observers say the Internal Revenue Service's recently-unveiled "Relief Procedures for Certain Former Citizens" are a direct response to the growing awareness across Europe of the problems, particularly with respect to banking and financial services, that as many as 300,000 EU citizens face as a result of their "accidental" American citizenship.

Here, Lehagre shares his thoughts on the new IRS "Procedures."

The first thing to say is that the new procedure is a step in the right direction. It waives taxes for people who have given up their U.S. nationality, and who owe less than a total of US$25,000 in back taxes for the past six years.

But it doesn't go far enough.

The vast majority of accidental Americans, most of whom were born in the U.S. but left at an early age, and have no ties with the country, would not owe US$25,000 in taxes.  The idea that most if not all American expatriates are rich is a dangerous yet persistent myth.

For this reason, unfortunately, this new IRS measure ignores the high cost to most accidentals of hiring experts to help them to file the necessary tax declarations this and other programs require, and/or to find out whether they qualify for the program.

The IRS also appears not to take into account the US$2,350 charge for giving up nationality – as this is not waived for those participating in this new program.

Nor does the new program specifically address the fact that some 300,000 dual U.S./European citizens face having their bank accounts closed at the end of December, when a grace period during which the U.S. Treasury has enabled non-U.S. banks and foreign financial insitutions not to have to report the Tax Information Numbers (Social Security Numbers) of their American clients and account-holders when filing their FATCA reports, is set to end.

FATCA, or Foreign Account Tax Compliance Act, is the 2010 U.S. tax evasion law that requires non-U.S. banks and foreign financial institutions around the world to report details of all their American account-holders' assets above a certain amount.

The end of this moritorium means that, unless the U.S. authorities act quickly to extend it or otherwise address the matter, non-U.S. banks and financial institutions will have to choose between closing the accounts of U.S. citizens who lack TINs -- which would violate EU laws that require them to provide banking services to EU citizens -- or keep these dual citizens' accounts and pay a 30% withholding tax on all their U.S. dollars transactions.

The latter could drive banks to bankruptcy, according to the European Banking Federation, which has been sounding the alarm for months.