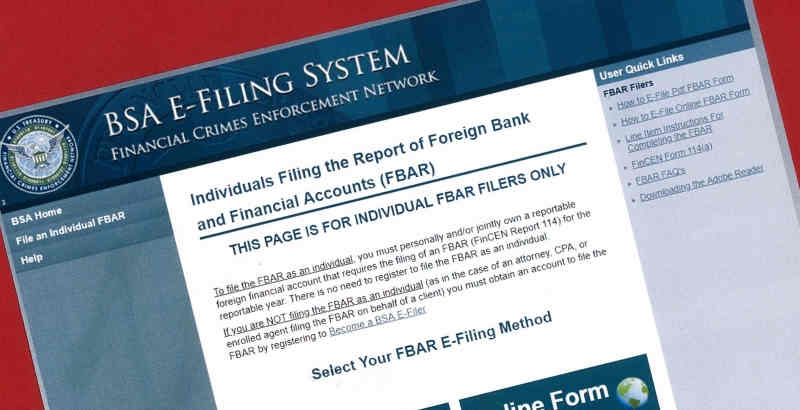 The introduction of the Foreign Bank Account Report (FBAR) requirement in 1970, as a result of the Bank Secrecy Act of that year, may well be one of the most enduring legacies of the Nixon administration, says John Richardson, a Toronto-based lawyer who helps Americans with citizenship issues. Here, he reveals a little-known aspect of what the fine print of the FBAR legislation actually says, with respect to non-Americans who travel to the U.S., and who happen to have bank accounts back home...

American taxpayers have been shovelling millions of dollars into Uncle Sam’s coffers over the past 50 years, after having been found to have “wilfully” failed to file FBARs, which in many cases they’d been unaware they were expected to file – until informed of the fact that they were in trouble because they hadn't.

(For those found to have "non-willfully" failed to file an FBAR, the maximum penalty is US$10,000, but if it's deemed to have been a "willful" failure, the maximum civil penalty is "the greater of either US$100,000, or 50% of the value of the un-reported accounts".)

As for those found to have committed a criminal willful failure to file one or more FBARs, they"shall be fined not more than $250,000, or imprisoned for not more than five years, or both," the regulations state.

(Then again, at least, as a recent court case has made clear,  the non-willful penalty cap isn't US$10,000 per year per bank account...)

One particularly pernicious but little-mentioned aspect of the FBAR regime – which is already famously persecutory – is, still, the fact that it can catch out individuals who, to quote the language of the FBAR statute itself, are neither citizens nor residents of the United States, but are "a person in, and doing business in, the United States".

Think of of it: The FBAR legislation actually states, clearly, that a visitor, with a non-U.S. financial account, who may merely be "doing business in the United States," is potentially subject to the full force of the FBAR law.

To be sure, as far as anyone I know, and anyone else I know is aware, no one who has been in the U.S. for a brief period, on business or for any other reason, has been hit with this little-known feature of the FBAR.

Nevertheless, it's there. Check out the regulations if you don't believe me. (Don't look for the words "Foreign Bank Account Report" or "FBAR" when you do, though, I should warn you: They're not there.)

Before any business folks who are currently in the U.S. on business start to panic, I should mention that there's also, within the wording of the legislation, a key part of the statute that gives the Treasury the right to exempt "a reasonable classification of persons" from these seemingly-worrisome regulations. Thus probably, for now at least, business travelers, holiday-makers and other visitors to the States needn't worry too much about FBARs.

But then, few Americans, at home or abroad, had to worry about FBARs either, even though, given that they came into force in 1970, they technically should have, until the Foreign Account Tax Compliance Act (2010) began to shine a spotlight on those overseas bank acounts...