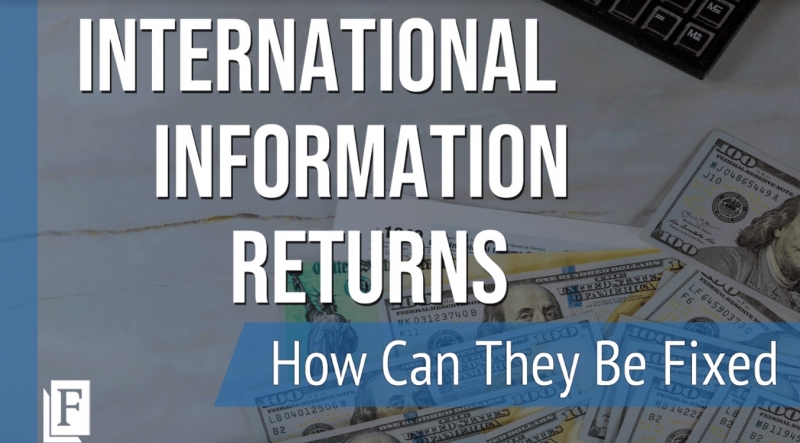 It's a fact that as the tax and financial reporting obligations imposed by the U.S. government on its expatriates have increased exponentially in recent years, awareness and understanding of them by the average American resident overseas has not kept up. This lack of knowledge, not surprisingly, too often results in significant levels of non-compliance.

Occasionally, the penalties resulting from a perfectly innocent lack of knowledge on the part of the taxpayer in question can be eyewatering – and, to the individual taxpayer, devastating...

What's more, as  Frost Law partner and chair of tax controversy Eli Noff and his AXFNJ podcast interviewer John Richardson (who is also a Toronto-based lawyer) agree, the mechanisms for fixing "Delinquent Foreign Information Returns" and other compliance mistakes has actually become more nuanced and risky than was the case prior to certain changes that the IRS introduced in November, 2020.

Here, in the second of their two AXFNJ podcast conversations, Noff and Richardson stress the importance, for taxpayers, in staying on top of any efforts they may have made to seek special consideration for "reasonable cause" for a delinquent information filing on their part, for example, and not simply assuming that by sending off a document, it will actually end up being read, and taken into account.

Where to file 'delinquent information returns'

If, Noff adds, "there's unreported income" involved, he would urge the taxpayer to "seriously consider a streamlined [filing] procedure," to head off some of the problems that often afflict other expats who have failed, for whatever reasons, to report certain income they've had.

Richardson and Noff then go on to discuss the cases they hear of far too frequently, of well-intentioned expatriate taxpayers who've been caught out by some unexpected filing mistake, and are now preparing to use the last of their savings, or money set aside for their education, to pay penalties for delinquent filing that they're said to owe.

Handled properly, they stress, such life-changing payments need not end up having to be made.

To hear Richardson and Noff's conversation about how expats are best advised to go about filing delinquent international information returns, once they've discovered they need to, click here.

Frost Law is based in the Washington, DC area, and has offices in Maryland, Virginia, the District of Columbia, Pennsylvania and Florida.

Noff is a partner and chair of tax controversy at the firm, in addition to serving as the current chair of the American Bar Association’s subcommittee on Tax Collection, Bankruptcy & Workouts. He helped to build the firm with his partner Glen Frost, beginning in 2012, after receiving a law degree from the University of Maryland's Law School. He is also licensed as a Certified Public Accountant.

More in this category: « AARO's William Jordan: 'Twenty Years Since September 11, 2001' AARO's Atkinson: 'Let's take advantage of this rare outreach by a member of Congress' »