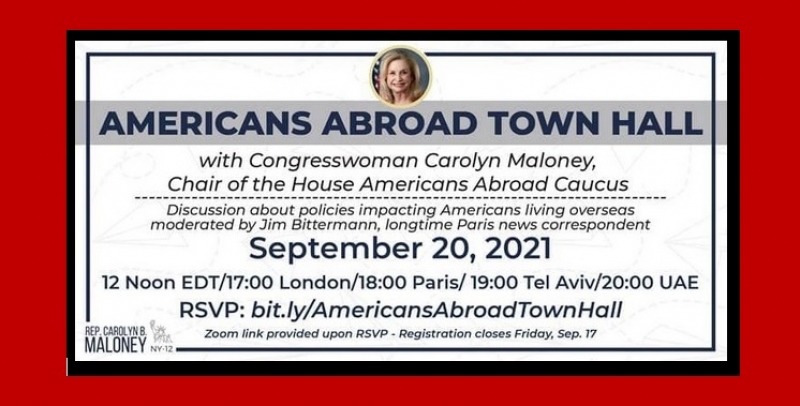 This coming Monday, Carolyn Maloney, a New York City member of the House of Representatives who is co-founder and chair of the House's Americans Abroad Caucus, will be hosting an online "Town Hall" for expatriate Americans, via Zoom. The event is scheduled to kick off at 5pm London time, noon on the East Coast of the U.S., and other places according to the usual time differences. The registration deadline is Friday (Sept. 17)...

Here, Paul Atkinson, a long-time American expat, former OECD official and current chair of the Association of Americans Resident Overseas' Banking Committee, considers what some of the key areas likely to be discussed will be, and urges fellow expats to participate on Monday if at all possible...

As any American who has lived abroad for any length of time will know, outreaches of the kind Congresswoman Maloney is scheduled to host this Monday are rare. We should all try to take advantage of this opportunity.

At the very least, a good turnout is likely to encourage further outreach by members of Congress. What's more, an enthusiastic and heart-felt participation would send a forceful message to those who urgently need to hear it, while also calling attention to the widely-felt frustrations many Americans resident abroad share, with respect to the way they're taxed and otherwise treated by the U.S. financial system.

As someone who has been monitoring the goings-on in Washington for some time, I can report that Rep. Maloney has a history of being a friend of U.S. expats on many issues. Indeed, in 2012 the Association of Americans Resident Overseas (AARO) gave her an award for outstanding service for her work to extend voting rights to U.S. citizens overseas. And in 2019 she re-introduced two bills in Congress  which have yet to progress very far, but which should: Because both are important.

One, the Overseas Americans Financial Access Act (HR 4362, 116th Congress), would create a “Same Country Exemption (SCE)” to banks’ FATCA reporting requirements. Banks and other financial institutions would no longer have to report to the U.S. – the way they are obliged to do now, under FATCA – on those of their American clients who are legally resident in the same country as the financial institutions in question.

In effect, overseas Americans would become more like their neighbors (including those who are also expats, but not of the U.S.): that is, their bank accounts in the country in which they currently live would only be subject to reporting to their  host government, i.e., not to the U.S. Treasury.

While exactly how helpful the SCE would be for ordinary American expats may be (and sometimes is) a matter of opinion, it could be transformative for many "accidental Americans," since it should eliminate the requirement for banks to ask their local customers for US Tax Identification Numbers (TINs).

(Accidental Americans, of course, are individuals who have lived all or most of their lives outside of the U.S., as citizens of other countries, but whom  the U.S. considers to be American citizens – and thus taxpayers – because they happened to have been born in the U.S. to non-American parents who left soon afterwards, or born elsewhere to at least one American citizen parent. Many only discovered they were considered to be American by the U.S. recently, when their non-U.S. bank told them, typically when telling them they needed to provide a U.S. TIN if they wished to keep their bank account.)

In that case, the Central Netherlands Court ruled that the FATCA IGA has the force of Dutch law, and that this meant that banks needed to obtain U.S. TINs from all the  "U.S. persons" whose reportable accounts they held and administered.

Said the court, in that case (section 3.6): "By entering into the NL IGA, the Dutch government has committed itself to the implementation of FATCA in the Netherlands, and to take measures in its national laws to that end…

"Administrative obligation(s) [include] information that the NL IGA makes mandatory, including TIN[s]….

"that obligation is therefore not only contained in FATCA itself, but also in Dutch laws and regulations…”

On this basis, according to the court, a bank is within its rights to decline to offer or maintain an account if the account holder will not, or cannot, apply for a U.S. TIN, however unfair it may seem.

However, if a "Same Country Exemption" were to be incorporated as an amendment to FATCA  IGAs currently in force around the world, non-U.S. financial institutions would no longer be obliged to report to the IRS on their American clients who were legally resident and paying taxes in the country in which the financial institution in question was located.

American expat clients might still be unwelcome to some banks, and the FATCA IGAs would still have the force of law in all those countries that have agreed to them, but the IGAs would no longer make anything mandatory.

And, in the Netherlands (and elsewhere in Europe), for example, FATCA would therefore cease to provide legal justification for overriding the EU Payments Directive, which entitles legal EU residents to basic banking services in whichever EU country they live in.

Thus, while the SCE would not resolve issues of the legitimacy of U.S. extra-territorial taxation, nor relieve accidental Americans of certain longstanding U.S. reporting obligations, it would bring about a return to a status quo ante, in which banks were financial institutions that provided savings and checking accounts and loans, and not enforcers of U.S. anti-tax evasion laws.

Rep. Maloney's other bill, meanwhile, is known as the "Commission on Americans Living Abroad Act" (H.R. 4363), and would provide for the creation of an "Executive Commission" that would be comprised of a 10-member, bipartisan panel, which would be tasked with "examin[ing] the concerns of U.S. citizens living and working abroad."

This might generate little more than information-gathering and stock-taking initially, but these are necessary first steps if the concerns of overseas Americans are to be integrated more coherently into the policymaking process in Washington.

Too often (as expats know better than most), poorly-targeted and damaging laws attract attention only after it is too late to influence them.

Sometimes – FATCA and the more recent "passport revocation" legislation (part of a 2015 highway bill) come to mind – expat-damaging legislation appears suddenly, often in unrelated legislation having to do with Homeland issues, and for this reason is barely noticed until it's too late to do anything about it.

Better processes are needed to ensure that impacts on overseas Americans can be anticipated at the design stage, and inadvertent but major policy mistakes can be avoided.

Rep. Maloney's idea for a new congressional commission focused specifically on expat issues might lack the pizazz of a bill that would, for example, abolish FATCA, or offer statehood to the estimated 7 million to 9 million American citizens who live outside of the U.S., but it would be an excellent, and much needed, starting point.

Again, those interested in signing up to Monday's Americans Abroad Town Hall should click here. (Note that there's a place on the form for putting forward any questions you might like to hear addressed...)
_____________________________
Paul Atkinson is chair of the Banking Committee of the Paris-based Association of Americans Resident Overseas. AARO was founded in 1973 by Phyllis Michaux and a group of other Americans who were concerned about the way they thought – even then – that the U.S. government was neglecting those of its citizens who lived abroad.

Today AARO is an international, non-profit, non-partisan, volunteer-run association with members in 46 countries. It researches issues that significantly affect the lives of overseas Americans and endeavors to keep its members informed of those issues, while also lobbying on behalf of expatriate causes, such as taxation, citizenship issues, Social Security and Medicare.