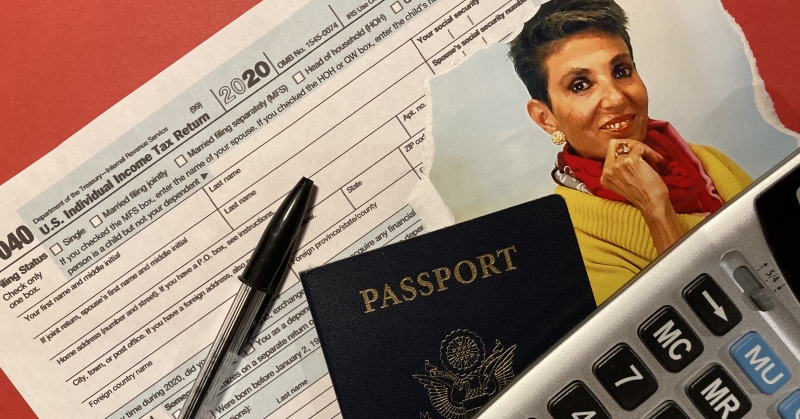 Last week, we reported the news that the U.S. Internal Revenue Service had announced that U.S. taxpayers could now begin to claim a "reasonable cause" defense, in the event they were ever to find themselves hit with a penalty in connection with a tax matter for which they had "reasonably and in good faith" relied upon any IRS-published FAQs (frequently-asked-questions) that has to do with new tax legislation.

For Virginia La Torre Jeker, the well-known American tax expert and blogger who is (famously) based in Dubai, the IRS's statement was, well, about as clear as mud...

...Here, in an excerpt from her just-published blog on the subject, she explains her take on the IRS's latest statement, and why she thinks "the answer, when it comes to penalties being given to taxpayers who relied on IRS FAQs, 'is still Well, it depends!'"

The first thing taxpayers as well as tax industry professionals need to look at, when considering the reliability of an IRS FAQ, is whether the FAQ has been published in the Internal Revenue Bulletin (IRB).

If it is, it has very strong precedential value. If it is not so published, the taxpayer should look to whether the FAQs deal with “newly enacted tax legislation” and if it has been highlighted by the IRS and posted on its website in a separate “Fact Sheet”.

That's because these “Fact Sheet FAQs” carry more weight than others, according to the IRS’ recent announcement.

So-called “Fact Sheet FAQs” may help abate tax penalties, even though not published in the IRB. The IRS stated that FAQs that are published in a Fact Sheet that is linked to an IRS news release will be considered authority for purposes of the exception to accuracy-related penalties that applies when there is substantial authority for the treatment of an item on a return. (See Treas. Reg. § 1.6662-4(d)  for more information.)

This new policy is a step in the right direction, since astute tax professionals have known for some time that unless an IRS pronouncement is published in the IRB, its legal weight is zero.

Instead, binding rules can be found only in an obscure collection of more than 2,000 pages per year – the Internal Revenue Bulletin. Now, the IRS has been criticized for this stance for at least the last five years. Finally, the agency is taking some action – albeit, in my view, not enough!

Criticism of the IRS has paid off (a little)

Taxpayers as well as many professionals are often completely unaware that reliance on IRS information, FAQs, tax forms and tax instructions is at the taxpayer's peril, with the possibility of penalties if they get it wrong.

The Government Accounting Office (GAO) has noted the problem (see pages 6-7) since at least 2016, when it mentioned it in a 51-page report to Congress, entitled "Regulatory Guidance Processes: Treasury and OMB Need to Reevaluate Long-Standing Exemptions of Tax Regulations and Guidance". (See pages 6 - 7.)

The GAO's research showed that many times, FAQs published outside the IRB had contained no disclaimer or explanatory language noting any reliance limitations.

But the fact remains that if an FAQ is not published in the IRB, the IRS may change its position, or reinterpret the FAQ, at any time. The IRS has done so on various occasions, much to taxpayers’ detriment.

In her post, Ms. Collins correctly pointed out that “It is neither fair nor reasonable for the government to impose a penalty against a taxpayer who follows information the government provides on its website.”

She then went on to recommend that the IRS (1) "should never assess a penalty against a taxpayer for taking a position consistent with an FAQ posted on the IRS website at the end of a taxpayer's taxable year, or at the time of return filing, unless the IRS has convincing evidence the taxpayer knew the FAQ had been changed"; and (2) "should include the versions and dates of each FAQ on its website, or create an archive of obsolete or modified FAQs, including applicable dates, so that taxpayers can locate an FAQ that was in effect at the time they filed their returns."

In its statement earlier this month, the IRS announced it is updating its process for certain frequently-asked questions (FAQs) on “newly-enacted tax legislation”.

Significant FAQs on newly-enacted tax legislation, as well as any later updates or revisions to those FAQs, will now be announced in a news release, and posted on the IRS.gov website, in a separate Fact Sheet.

These “Fact Sheet FAQs” will be dated, the IRS said, to enable taxpayers to confirm the date on which any changes to the FAQs were made.

Additionally, prior versions of Fact Sheet FAQs will be maintained on the IRS.gov site, to ensure that, if a Fact Sheet FAQ is later changed, taxpayers can locate the version they relied on, if they later need to do so.

In addition to significant FAQs on new legislation, the IRS may apply this updated process in other contexts, such as when FAQs address emerging issues.

One area that clearly involves an “emerging issue” is cryptocurrency – so let’s be on the lookout, if the updated process is applied to forthcoming FAQs dealing with virtual assets.

(Based on the recent IRS announcement, reliance on old FAQs still counts for "something". More on this below.)

Included in revision of the FAQ process, the IRS announced that the following legend will be added to such Fact Sheet FAQs:

"These FAQs are being issued to provide general information to taxpayers and tax professionals as expeditiously as possible. Accordingly, these FAQs may not address any particular taxpayer's specific facts and circumstances, and they may be updated or modified upon further review.

"Because these FAQs have not been published in the Internal Revenue Bulletin, they will not be relied on or used by the IRS to resolve a case.

"Similarly, if an FAQ turns out to be an inaccurate statement of the law as applied to a particular taxpayer's case, the law will control the taxpayer's tax liability.

"Nonetheless, a taxpayer who reasonably and in good faith relies on these FAQs will not be subject to a penalty that provides a reasonable cause standard for relief, including a negligence penalty or other accuracy-related penalty, to the extent that reliance results in an underpayment of tax.

"Any later updates or modifications to these FAQs will be dated to enable taxpayers to confirm the date on which any changes to the FAQs were made.

"Additionally, prior versions of these FAQs will be maintained on IRS.gov to ensure that taxpayers, who may have relied on a prior version, can locate that version if they later need to do so."

What about other (non-Fact Sheet) FAQs?

To read what La Torre Jeker advises taxpayers to make of "other, non-Fact Sheet FAQs", and the rest of her blog on the topic of IRS FAQs, and how much they can be trusted, click here.

Virginia La Torre Jeker is, as reported above, a long-time U.S. expat tax law practitioner, who has been a member of the New York State Bar since 1984. Now based in Dubai, she is also a prolific blogger, currently at us-tax.org, and previously at AngloInfo.com.