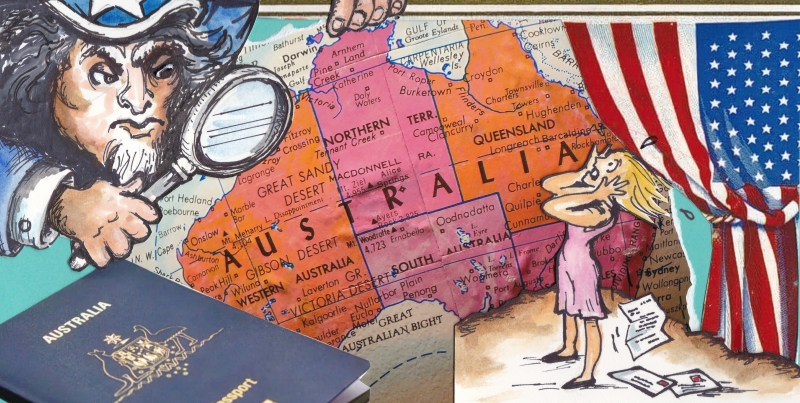 Having been born in Australia and lived her whole life there, "Amy," as she wishes to be known here, had no idea that her life was about to be turned upside-down, and changed forever, in March, 2020, when someone from her bank said that they needed to ask her to fill in some details having to do with her citizenship.

Then suddenly, Amy says, her "OMG Moment" – as it's often referred to by accidental Americans, a group which Amy was soon to discover she was a member of – arrived...

As Amy goes on to explain to John Richardson in this 34-minute podcast, recorded earlier this month, this unforgettable OMG Moment of hers emerged after she revealed to her bank’s representative that her mother had actually been an American citizen – even though she herself had been born and grown up in Australia, went to university there, and was now working there.

What she went on to discover that day was that in spite of the fact that she, and everyone she knew, assumed she was 100% Aussie, the United States government had other ideas.

Uncle Sam, in fact, considered her to be a U.S. citizen as well – and thus, having the same U.S. tax obligations while living abroad that she'd have had if she'd spent her entire life until that point in the U.S.

After the full "horror" of what was to be required of her as a result of this fact, even if all she wanted was to be able to keep her Australian bank accounts, began to emerge, Amy recalls, she was overwhelmed with emotions, "because I could not understand...

"This had never come up [before], not once.

"And yet randomly, out of the blue, they're like, 'you have to give us your [U.S.] Social Security number, or we'll be cutting off access to your funds.'

"I felt sure the bank had made a mistake, because, this was the United States we were talking about, always so respectful towards their citizens, and caring about privacy?

"I told them [the bank] how non-compliant they probably were being, and that they should check the rules before they started speaking to me like that.

"The poor guy that I was talking to, he was just so cool and calm, he just said, 'I'm sorry, Amy, but actually, [this is the law].'

"And so I started asking around, reading up on the legislation and what it meant, ringing tax agents in Australia who do U.S. taxes, and they all confirmed that yes, indeed, it was true, that I did have these obligations.

"And they also stressed to me the importance of following the laws, and what it might mean if I didn't, how the IRS could come after me with penalties..."

To see and listen to some of Richardson's other recent podcasts, click here and scroll down.

Richardson, pictured left, is a Toronto, Canada based lawyer and dual U.S./Canadian citizen, who assists U.S. citizens and Green Card holders living outside the United States with their citizenship issues, while also interviewing such expats and writing about the tax and citizenship issues that many of them are struggling with.

More in this category: « U.S. tax expert Goulder: Theory of 'strategic forbearance' could help explain EU reluctance to challenge U.S. over FATCA A Reader Asks: ‘Who can we go to for help – and how can we go about changing these tyrannical laws?!’ »