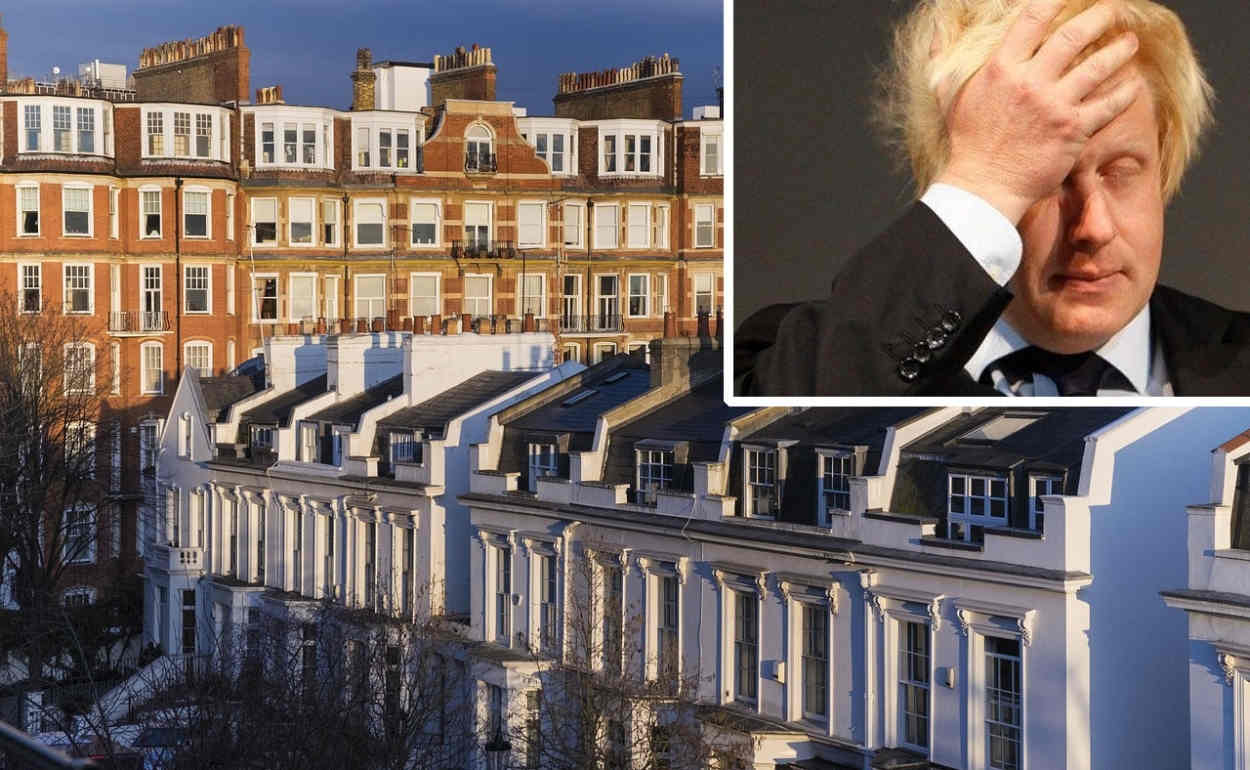 Boris Johnson, who today was named to succeed Theresa May as Britain’s prime minister, is well known to Londoners for myriad reasons, including having unofficially lent his name to a bicycle-sharing scheme (“Boris bikes”) that was launched in 2010, and with which he, a keen cyclist himself, was associated.

Less well known to many of his fellow Londoners is that he had a bitter and rather public battle with the U.S. IRS six years ago, when it sought to tax him on the sale of his London property, owing to the fact of his American citizenship, acquired at birth.

Below is an updated version of a story on his U.S. tax travails that we first ran last September. We thought it timely to revisit this issue now, because London property experts report that Americans currently account for a disproportionately large share of those currently shopping for – and buying – London properties, helped by a dollar that's at near-record highs against the pound, and expected to strengthen further. At the same time, London property prices have been under pressure, with the average value of a London home reported recently to be  down by 4.4% in the year to the end of May.

When British politician Boris Johnson renounced his citizenship in 2016, many observers speculated that he had finally been moved to do it after the seemingly ill-advised sale of his home in north London in 2009 saw him hit with a significant (said to be in the tens of thousands of pounds) capital gains tax payable to the U.S. government on his half of the profit from the sale.

Among mortgage brokers and financial advisers familiar with it, the Boris Johnson house-sale saga has become the textbook example of what other, newbie expat Americans married to British nationals are warned to try to avoid in structuring their ownership of a U.K. residential property that they intend to declare as their primary residence.

It has also become an oft-referenced reminder to those long-established American dual citizens resident in Britain – as well as to UK-based “accidental Americans”, as those born in the US who have spent their lives elsewhere have taken to calling themselves – of the importance of getting good tax advice before putting their homes on the market.

Johnson’s experience is relevant at the moment, U.K. mortgage experts point out, because Americans are said to be among those taking advantage of Britain’s relatively low house prices, and an unusually strong U.S. dollar relative to the British pound.

Uncertainty surrounding the U.K.’s plans to leave the European Union later this year is said to be a major factor in the pound’s weakness.

Currently the rate is running around US$1.23 to the pound, although some days it dips lower, and there is talk that it could go as low as parity if the U.K. leaves the EU without a deal.

The strength of the dollar coupled with the ailing state of London's property market at the moment – plus a historic fondness by many wealthy Americans for Britain – has resulted in a disproportionate surge in the percentage of properties being bought by Yanks, property experts have been reporting. Said the Daily Mail, on June 26: "America's super-rich are gobbling up homes in London's most exclusive areas as they exploit the plunging value of the pound against the dollar."

The paper went on to cite research showing  that U.S. buyers "are enjoying property prices that are almost 50% cheaper in dollar terms than four years ago", and that the proportion of London homes sold to Americans in the city's most desirable districts "has nearly doubled so far this year, when compared to 2018.

"Data from estate agent Knight Frank shows U.S. buyers are second only to the Chinese when it comes to foreign purchasers of real estate in exclusive postcodes."

For this reason, experts are reminding Americans not to wait until they’re about to move into a U.K. property before taking advice on how they should structure their purchase from a tax point of view.

“Normally we would say that people should get tax advice before buying a property as well as when they come to sell, as by that point it’s often too late” to correct a poorly-thought-out ownership structure, Coutts head of Americas clients Andrew Grimes says.

Johnson came a cropper in 2009 because, although a British citizen and long-time resident of the UK, like all Americans living outside the U.S. who have not formally renounced their citizenship, he continued to be regarded by the US as an American citizen for tax purposes.

In addition to being legally required to file a tax return every year, American expats are also technically required to pay US tax on certain financial gains – including on any gains from the sale of a primary residence – that are normally taxed by the U.S., but not by the country in which they are living.

Although he initially vowed not to pay the 20% capital gains tax when he was informed that he owed it, after the house sale had gone through, Johnson eventually did, in 2015.

Over the years since then, when either the husband or wife of a house-buying couple is American but the other isn’t, the “Boris case” is now apparently often referenced, industry sources report, particularly by American tax specialists keen to see their American clients avoid following in the British politician’s footsteps with respect to the way they structure the ownership of their U.K. residence.

That said, though, David Treitel, managing director of Wimbledon-based American Tax Returns points out, “the ‘Boris lesson’ has been less important than it used to be” recently, as a result of U.K. property prices having been soft.

With the UK pound having slumped, as noted above, Treitel points out, the difference between what people buying houses now, or recently, paid or are paying, compared to what they will probably sell them for in the foreseeable future, may not be likely be anything like the £730,000 gain press reports at the time said Boris Johnson and his wife realized, unless they hold onto them for some time.

In the case of those who took out a pound sterling mortgage when the exchange rate was 1.8 dollars to the pound, the gain, as seen by the US tax authorities, is typically magnified, since it will treat the difference between the dollar amount borrowed and that (lower) amount when paid off in full as taxable income.

To be sure, the first US$250,000 of the gain on the sale of a house is exempt from the US capital gains tax under a tax break (“Primary Residence Exclusion”) for homeowners introduced by President Clinton in 1997, Treitel points out, which again he says should minimize the potential damage for today’s buyers, at least while house prices aren’t growing rapidly. (Couples can exclude US$500,000 under this exclusion.)

However, he warns that there’s another element to this equation that American buyers of U.K. properties need to be aware of, particularly at the moment: “Foreign currency mortgage gains.”

“With the pound possibly to fall further, the possibility of U.S. tax payable on a foreign currency mortgage gain is a larger issue for many people today than the possibility of owing tax on the future sale of a property,” he explains.

“Although an American in the U.K. would usually borrow in pounds, the IRS sees payments (or refinancing) of a non-U.S. mortgage as similar to a currency trade – that is, where fluctuations in the pound/dollar exchange rate will inevitably produce gains or losses.”

Treitel notes that many Americans who have sold their homes since June 2016 – the month that the U.K. voted to leave the EU, setting off the fall in the value of the pound against the dollar that continues – “have been surprised to find themselves owing tax to Uncle Sam on the so-called foreign currency mortgage gains” that they have been realizing, even though the actual value of their properties may not have appreciated that much, if indeed, at all.

Indeed, an American who uses his currently-strong U.S. dollar today to buy a U.K. property at what appears to be a bargain price, only for it to lose, say, 20% of its value, could for this reason still end up owing tax to the U.S. on the gain, even if he ends up selling the house at a loss in sterling terms, Treitel points out.

“The US tax authorities won’t look at the loss, all they’ll see is the gain, on paper, in dollars.”

For this reason, American expats and their advisers “need to be aware of this issues” they potentially face when buying UK properties, Treitel says, “especially with Brexit [coming], because the pound could fall further still."

Treitel and other tax experts say that the usual recommendation for people in Johnson’s situation here in the UK is to place the ownership of their property “mostly if not entirely” in the name of the non-American spouse.

In Johnson’s case, some experts have speculated that he might have taken a conscious decision not to place ownership of his house entirely in his British wife’s name in order to avoid the risk of being seen by media commentators as “avoiding” tax.

Others, though, have questioned whether Johnson, of all people, would not have willingly avoided a U.S. tax that, at least after the fact of being informed he had to pay it, he referred to as “absolutely outrageous”.

The fact that American citizens can find themselves owing money to the IRS on the sale of a U.K. primary residence appeared to come as a surprise to Boris Johnson, as noted above. To read about seven other things Americans buying properties in the U.K. have also found surprising, according to mortgage experts, see Seven things that surprise Americans about U.K. mortgages, house-buying.

To read and download a chart detailing the offerings of mortgage brokers in the U.K. that specialize in looking after Americans, click here.

More in this category: « 'Accidentels' reel but vow to fight on, as France's Conseil d'Etat rules in support of current FATCA regime Canadian court is latest to reject FATCA legal challenge »