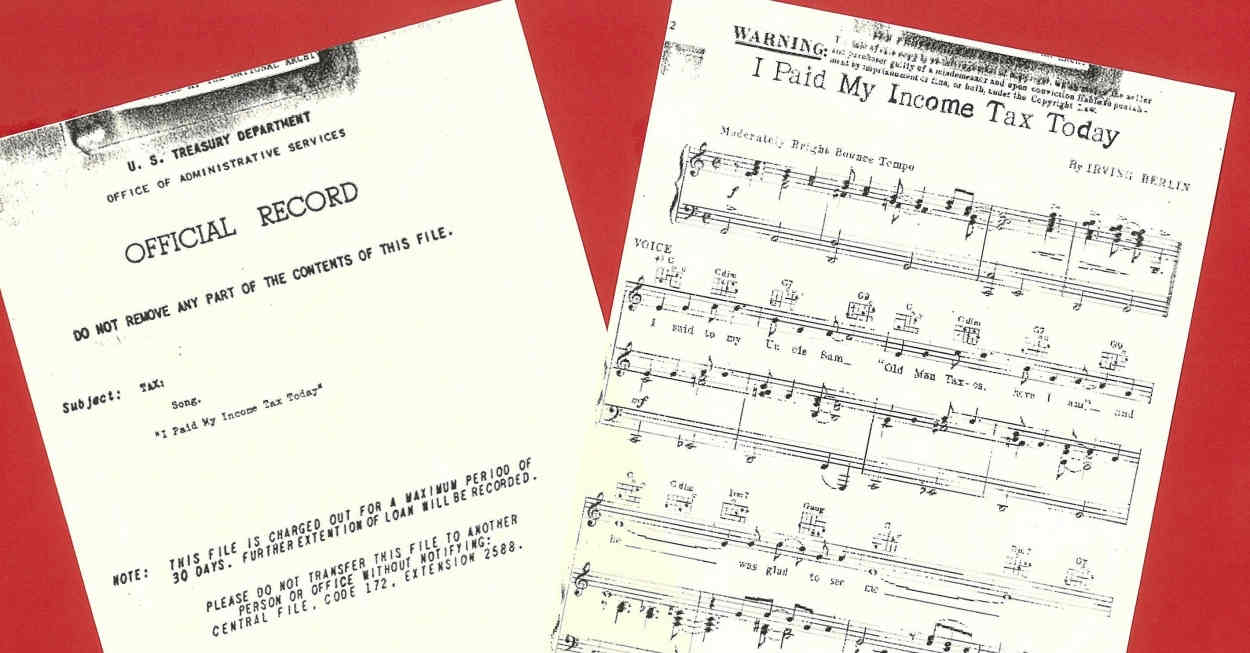 If the U.S. Internal Revenue Service has recently issued a call for a songwriter to come up with a melody celebrating the paying of one’s income taxes, we aren’t aware of it.

Back in 1942, though, Irving Berlin apparently didn’t even need to be asked to write I Paid My Income Tax Today, according to historical records...

Berlin – who at that time was already well known in the U.S. for his compositions, including such popular show tunes as Puttin’ on the Ritz and Oh! How I Hate to Get Up in the Morning – volunteered to write a popular song for the IRS that year, in order to do his part to help the federal government with what was being warned would be "unprecedented income tax collections," according to Treasury documents.

These Treasury documents have apparently been scanned, and posted on the website of the Oregon Center for Public Policy. (Two pages of these documents may be also viewed above.)

I Paid My Income Tax Today went on to be performed and recorded by several well-known singers, including Danny Kaye and Gene Autry, some versions of which can be found today on YouTube (below the advertisements).

Among the documents contained in this trove is a press release dated January 26, 1942, which noted that "Irving Berlin has written another song for the Treasury Department."

"I paid My Income Tax Today, the copyright of which has been turned over to Secretary [Henry] Morgenthau, has just come off the presses as a companion piece to Berlin's Any Bonds Today?," the press release added, explaining that Berlin's earlier song, about bonds, had been "written by request." (This was a song about war bonds, not investment or savings bonds.)

"But, on a visit to Washington several weeks ago, Berlin learned about the [Treasury] Department's intensive preparations for unprecedented income tax collections this spring, and volunteered to do a 'popular' tune on the subject," the press release continued.

It then went on to provide the words of the song, including a verse which has the line, "a thousand planes to bomb Berlin," which was apparently left out of many of the versions of the song subsequently performed.

Many of Berlin's other lines, though, such as “careful, Mister Henry Junior, that's my dough”, survived intact, and are certain to still resonate with just about everyone who is having to send off a 1040 to Austin, Texas this month, (or over the next few months, if living overseas, since the deadline for expats this year is June 17, owing to the fact that June 15 this year falls on a Saturday).

The "Henry Junior" referred to in the song was Treasury Secretary Henry Morgenthau Jr.

Among those who have highlighted the Irving Berlin tax song in the past has been London-based tax specialist David Treitel, managing director of American Tax Returns Ltd., who last year posted a reference to it on LinkedIn.

I Paid My Income Tax Today and Any Bonds Today? weren’t Berlin’s only patriotic songs. Perhaps his best known pro-American work is God Bless America, unveiled in the 1930s, before the lead-up to WWII. This is the Army was another one.

In addition to the songs mentioned above, Berlin’s extensive non-patriotic repertoire also includes such hits as Blue Skies and There’s No Business Like Show Business.

To see the 17 pages of scanned U.S. Treasury documents having to do with I Paid My Income Tax Today, including the original score, on the Oregon Center for Public Policy's website, click here.

Below, the words to Irving Berlin’s song in full, as they appeared in the 1942 press release.

[Songwriters interested in volunteering to write a new pro-tax-paying song, to add to the U.S. Treasury's apparently growing repertoire of such songs, are invited to get in touch with the American Expat Financial News Journal, as certain of our readers have shared with us some thoughts on aspects of the U.S. tax code they believe such a song might ideally contain.]