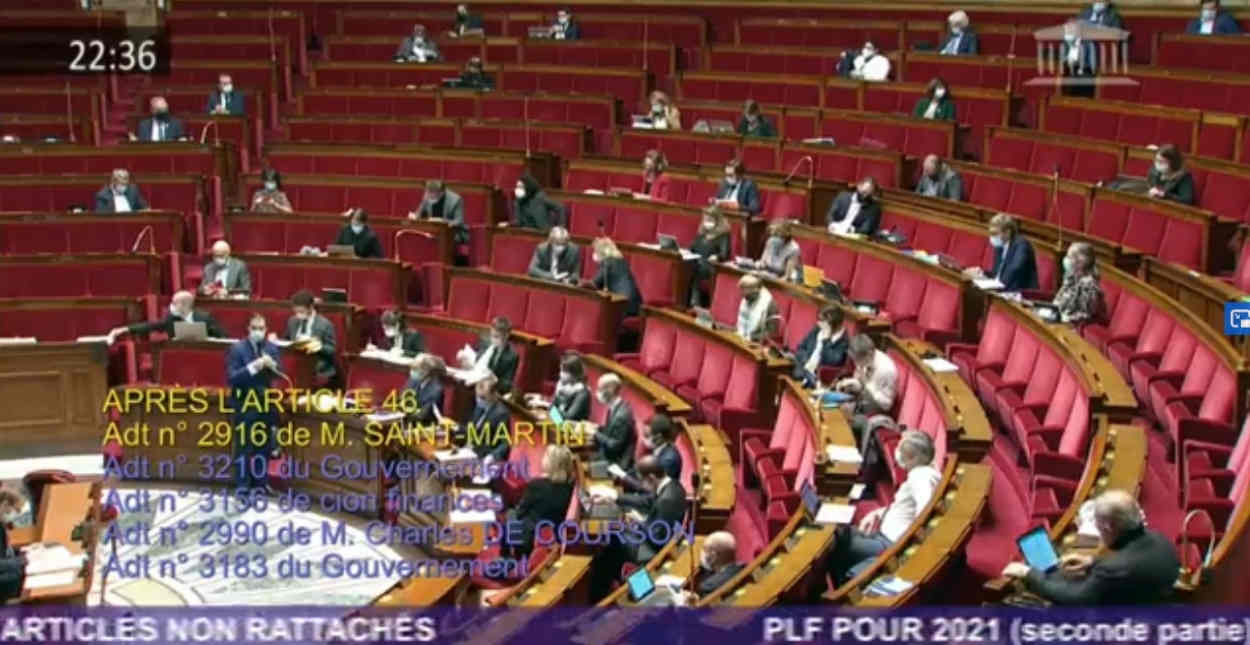 Friday's hearing of the French National Assembly, on the 2021 finance bill

A planned amendment to a bill currently making its way through France's legislature that would have mandated a change in an existing FATCA "intergovernmental agreement" currently in place between France and the U.S. – which would have obliged the U.S. to provide the same information to France about its citizens' U.S. bank accounts that France forwards to the U.S. about French accounts held by American citizens – was withdrawn at the last minute on Friday.

The news will come as a blow to many of the tens of thousands of so-called accidental Americans in France, and 300,000 estimated to live throughout Europe, who are struggling as a result of FATCA, a tax evasion-prevention law introduced by President Obama in 2010, and who had been hoping France might at last be about to stand up to the U.S. on behalf of its "Américains Accidentels".

As reported here last week, French Assembly members Laurent Saint-Martin and Marc Le Fur had said they would seek on Friday to have their proposed amendment to the 2021 Finance Bill included in the final draft of the legislation, in time for tomorrow's vote on it. 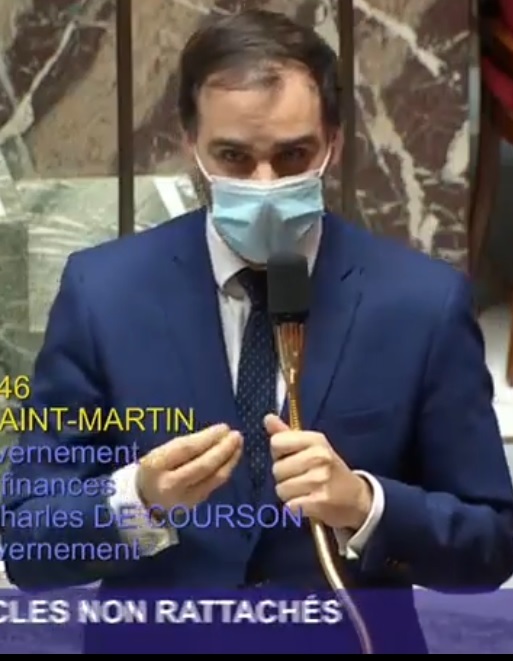 Saint-Martin, pictured left during his testimony on Friday, and Le Fur have been outspoken critics of the extra-territorial nature of FATCA for some time, and in May of last year, presented a report to the French government in which they called on it to urgently engage with the U.S. in further negotiations over FATCA. They cited as their reason for this the continuing problems thousands of French citizens with legacy American citizenship issues were having as a result of the efforts by French financial institutions to comply with FATCA.

However, on Friday, in spite of Saint-Martin's impassioned explanation at the beginning of the section devoted to discussing his and Le Fur's proposed amendment, as to why the current situation with respect to FATCA was "unacceptable"  and their amendment so urgently needed, Saint-Martin said they would withdraw it from consideration.

It was not, he explained, "an amendment intended to be adopted as-is, but [as a way of stressing] that there is perhaps a window of opportunity open, with the new presidency of the United States, and that we are counting on the government to make this happen".

Saint-Martin's comments about withdrawing the proposal came after Olivier Dussopt, France's Secretary of State to the Ministry of Public Action and Accounts, said that the amendment, if adopted, would "place in question a tax agreement with the United States that dates to 2013", and therefore didn't belong in the legislation under discussion.

Dussopt added: "On the other hand, we can, and I think we should, work with the MEAE [Ministry for Europe and Foreign Affairs] on this, with the primary concern of the protection of our fellow citizens who are Franco-American – 'by accident', to use Mr. le Rapporteur's expression – and also a concern of reciprocity."  (Saint-Martin is the Assembly's general budget rappoteur.)

Disappointed but
not surprised

France's accidental American community expressed disappointment but not surprise at the latest setback in their campaign, which they point out is based on the fact that they regard themselves as fully French citizens, and therefore entitled to expect their government to defend them against the efforts of a foreign government to extract money from them by claiming them as citizens, even though they are – they insist – not.

"I am very disappointed by the minister's response, which did not seem to be up-to-date on the subject," said Fabien Lehagre, founder and president of the Paris-based Association des Américains Accidentels (Accidental Americans Association), referring to the comments made by Dussopt with respect to Le Fur and Saint-Martin's proposed amendment.

"Without political will at the highest level of the government, it is unlikely that the subject of French citizens currently trapped in the extra-territoriality of American legislation will be taken into account by the new American administration.

"It is therefore essential that our representatives be able to maintain pressure on the government."

As reported, the banking difficulties for accidental Americans as well as many ordinary U.S. expats have been mounting recently, as FATCA has begun to require more information from non-U.S. banks and financial institutions around the world than it did previously about their U.S. citizen (and thus, under the U.S. system, U.S. taxpayer) clients.

Because FATCA carries with it significant penalties for those "foreign financial institutions" that fail to comply, including a 30% withholding tax on the U.S.-source income of any institutions found to have failed to report to the U.S. on any of their U.S. citizen account-holders, many banks simply refuse to have any American clients at all, saying it's not cost-effective for them to do so.

Others won't have American clients who are unable to provide them with so-called "Tax Information Numbers" (TINs, typically Social Security numbers), which, as of Jan. 1 of this year, the American authorities officially now require from all non-U.S. banks about their American account-holding clients.

Many so-called accidentals don't have such numbers, and object to, or are simply wary, of having to enter the U.S. tax system in order to obtain them. Renouncing their U.S. citizenship is also expensive and problematic, they say – in addition to having been impossible for more than seven months around the world, owing to the closure of most of the U.S. consulary offices that normally handle such renunciations, in response to the coronavirus pandemic.

'Nothing about them is American'

In his testimony on Friday, Saint-Martin stressed the urgency of doing something that might at last oblige the U.S. to do something about the way FATCA enables it to  come after citizens of France, and other countries, about whom "nothing" is in fact "American".

"Often [these Franco-Americans] don't even speak English," he told his fellow lawmakers, in an address which may be viewed on the AAA's website by clicking here.

"Often these people are the product of a wave of migration, movement, and back-and-forth travel in the 1960s and 1970s; often they are Baby Boomers who today are in their sixties and seventies.

Since the adoption of the American law FATCA, and especially since its implementation by means of bi-lateral agreements like the one France has in place, they are finding themselves being fiscally tracked.

"This is unacceptable and it must change.

"We need the backing of the Ministry of the Economy and the Ministry of ForeignAffairs to find a solution for these Franco-Americans, who are subject to discrimination that continues month after month, year after year, and that presents real difficulties for everyday life for such citizens."

Le Fur also spoke, noting that the matter was "a tax problem" for some of the dual nationals affected, "but a banking problem for many of them. Some of them can no longer open an account, can no longer obtain ordinary [banking] services."

Le Fur noted that one of the problems for the accidental Americans in question, as another speaker had mentioned, was the "zeal of the banks to apply a law that is not ours, that is extra-territorial".

"The best proof, my dear colleagues, is that whenever you go to open a bank account in France now, you are asked if you have a connection to America. Anyone and everyone is asked. It's a real issue."

Meantime, Le Fur went on, France is supplying the U.S. authorities with "a gigantic mass of information about our fellow citizens, but receives very little [in return] with respect to those French persons who might have [a financial] presence in America, and who might themselves not respect our tax rules. They are in the minority, perhaps, but the possiblity exists."

FATCA-related banking
issues in the Netherlands

Like their French counterparts, Dutch accidental Americans have also been struggling to obtain and maintain bank accounts in their country, and as in France, have received the support of a number of lawmakers there.

Against this backdrop, the Standing Committee on Finance of the Dutch equivalent of the House of Representatives – the Tweede Kamer – is planning to hold a "general consultation" on the subject of "accidental Americans" on Nov. 24, the American Expat Financial News Journal understands. No further details were immediately available.

Dr. Laura Snyder, the Paris-based, U.S. Taxpayer Advocacy Panel's overseas representative member, who is also one of the founding members of a new education and advocacy organization known as Stop Extraterritorial American Taxation (SEAT), contributed to this article.