U.S. multinational companies paid significantly less U.S. corporate taxes in the wake of the coming into force of President Trump's 2017 Tax Cut and Jobs Act, both domestically and abroad, according to a report published last week by the congressional Joint Committee on Taxation.

The report, which was prepared ahead of a major Senate Finance Committee hearing scheduled for today, also reveals an increase in investment, revenues, and employment following the Trump tax code overhaul, which took effect on Jan. 1, 2018 – and which has remained highly controversial ever since.

Among its many points, the 69-page report, entitled  U.S. International Tax Policy: Overview and Analysis  (JCX-16-21), compares data from the first year during which the Trump Tax Cuts and Jobs Act was in effect – 2018 – with comparable data from 2017.

Table 3, for example, on page 58 of the report (and pictured below left), shows how the average tax rate paid by U.S. multinational enterprises by region for both years declined, and how this compared with the average and median rates in Europe, the U.S.'s top ten trading partners, and the worldwide average tax rate, excluding those entities that opt to be "stateless". 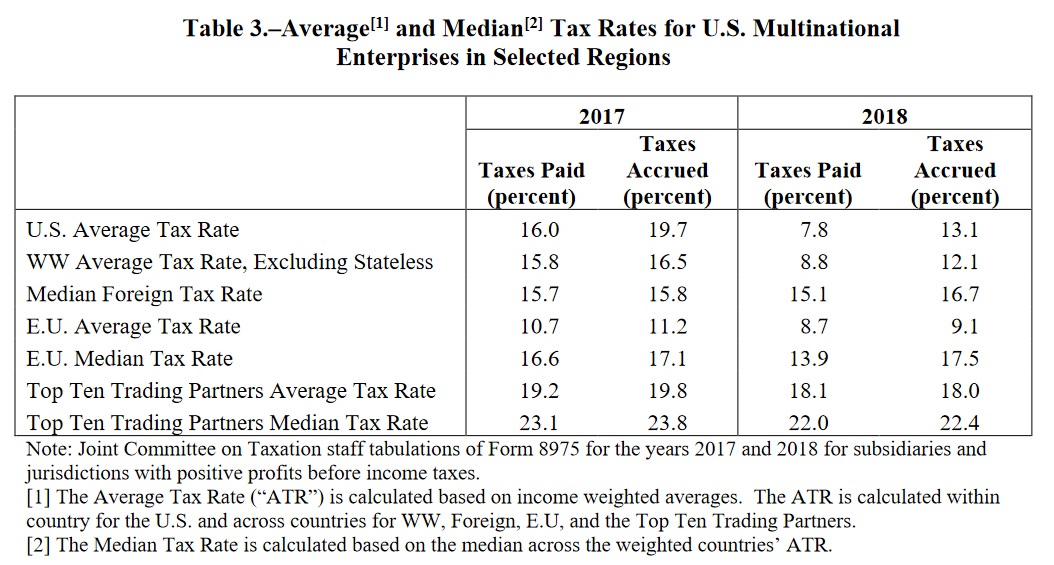 The report also looks at such influences as the OECD's "BEPS 2.0" campaign, as well as the effects of U.S. vrs. foreign ownership of assets, and the subject of "tax competition" among the world's countries.

One of the findings likely to attract attention, particularly now that the Democrats are the dominant party in Washington, will probably be the report's revelation that low-tax jurisdictions top the list of countries where U.S. multinational enterprises reported their greatest net profits, both in 2017 and 2018.

Of particular interest to many expatriate small business owners, meanwhile, will be the paper's observations on such elements of the TCJA as the GILTI (Global Intangible Low-Taxed Income), on which income it found the average foreign tax rate to be at least 10.4%.

"Combining the US$6.3 billion U.S. liability with the US$11.8 billion in foreign taxes paid results in a total tax of US$18.1 billion – for an overall tax rate of 16% on GILTI," the report notes.

As this publication and others have been reporting since before President Trump signed the TCJA into law, the GILTI regulations have been particularly problematic for expat American owners of small businesses, and repeated legal and lobbying efforts have thus far failed to fix the alleged issues, according to the legislation's critics.

One of the most prominent critics is Israel-based American lawyer Monte Silver, who is currently bringing a legal challenge in a Washington, DC district court against the way the Transition Tax element of the TCJA treats American small businesses and their owners located outside of the U.S., and has a "copycat" legal action against the TCJA's GILTI provisions on hold, pending the resolution of the Transition Tax case.

As reported, Silver filed his lawsuit against the IRS and U.S. Treasury (Monte Silver Ltd. v. IRS) in January 2019.

Asked for a comment on the JCT's report, he started out by noting that it correctedly acknowledges that the focus of the TCJA generally, and its GILTI provisions specifically, "is and always has been the Googles and Apples of the world.  We expats were caught in the net by mistake."

"And it is the same story with GILTI.  A small number of large companies owe GILTI [taxes], but a vast number of small companies either pay high annual compliance costs, or [simply] become non-compliant."

The JCT (Joint Committee on Taxation) dates back to the Revenue Act of 1926. It is established under the Internal Revenue Code, and is comprised of ten members, five of whom are from the Senate Finance Committee and five from the House Ways and Means Committee.

Its role is is to drill down into the way the U.S. administers its tax regime, and consider, and recommend, ways that it can be improved.