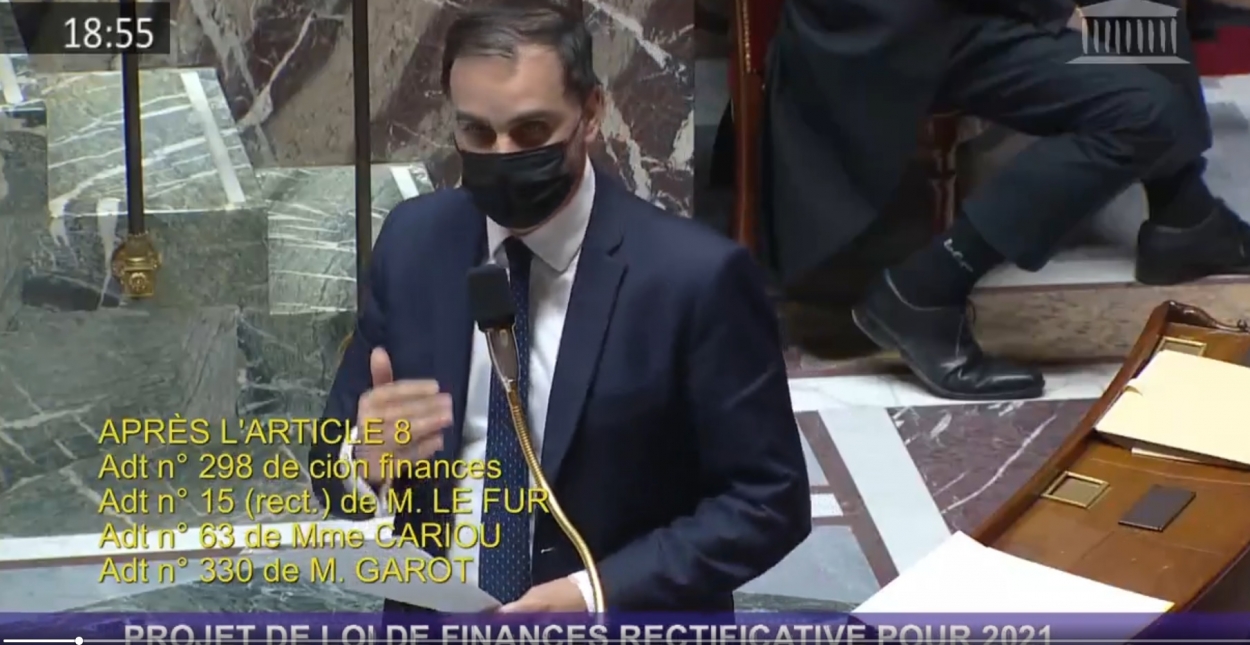 Friday's vote on the FATCA proposal in France's National Assembly

The latest attempt by certain French lawmakers to introduce a proposed amendment that would oblige the U.S. to reciprocate with respect to the information it currently receives from France under FATCA has ended, after members of France's National Assembly voted against it late in the afternoon on Friday.

The vote was the latest in a series of attempts by American expat groups, especially those comprised of so-called "accidental Americans,"  to get France's Parliament to insist that the U.S. also be bound by the FATCA regulations that it imposes on France, and  consequently, on those with American citizenship who live in France.

As reported, an earlier attempt to get the proposed amendment into France's 2021 Finance Bill last year was ended in December after the chairman of the French Senate's finance committee declared it to be "inadmissible" and thus was left out of the final draft of the legislation.

However, it was re-tabled earlier this year and adopted by the Assembly's Finance Committee, assisted by support from Laurent Saint-Martin, the general rapporteur for the budget, and Éric Woerth, a member of the Assembly who represents a suburban Paris district, and who is the Finance Committee's chairman.

According to reports, the vote against the measure came after two members of the Republique en Marche party, Olivier Dussopt and Alexandre Holroyd, expressed their opposition to it.

Had the Assembly approved the measure on Friday, it would have gone to the French Parliament's other house, the Senate, for consideration.

Fabien Lehagre, who heads up the Paris-based l’Association des Américains Accidentels (Association of Accidental Americans, or AAA), and other expat Americans who have been calling for changes in the way FATCA is implemented, expressed disappointment at the latest vote.

After the vote, in an emailed message, Lehagre urged his organization's roughly 1,200 members to "write to your MP to your express your dissatisfaction" as well as to "send an email to the President of the Republic [Emmanuel Macron] to ask him to put the subject of accidental Americans on the agenda of his next meeting."

Lehagre, pictured left, who is himself an "accidental," founded the AAA in 2017 to represent and defend accidental Americans against "the extraterritoriality of U.S. law."

At the time of Lehagre's note to its members, Macron was attending the then-just-beginning G7 Summit meeting in Cornwall, England, which President Biden also attended. No mention has yet been made of Macron and Biden discussing FATCA during their meetings.

FATCA, formally known as the Foreign Account Tax Compliance Act, was signed into law by President Obama in 2010, and came into force around the world in 2014, after the U.S. agreed Intergovernmental Agreements (IGAs) outlining how the anti-tax-evasion law was to be implemented by each country.  (To see the current list of such IGAs on the U.S. Treasury's website, click here.)

Not long after FATCA came into force, the Organisation for Economic Co-operation and Development began to introduce its own global compliance agreement, known as the Common Reporting Standard (CRS), the signatories of which may be viewed here. Unlike FATCA, it is reciprocal because it is meant to be an "automatic exchange of information" by all of the participating countries.

The fact that the U.S. has not signed up to it, arguing that owing to FATCA, it has no need to, is one of the reasons those calling for FATCA reciprocity believe they have a case – particularly as the fact that the U.S.'s lack of participation in the CRS is seen is making it a potential haven for wealth from CRS-signatory countries.

History of the FATCA
reciprocity campaign

Media coverage of the FATCA reciprocity movement in France largely begins, and is dominated by, the efforts of the accidental Americans living in the country to convince French lawmakers to force the U.S. to revisit France's IGA with the U.S. This is because such "accidentals" are burdened by significant, costly and restrictive U.S. tax obligations that they and others believe are unfair for tax-paying citizens of other countries who have spent little if any time in the U.S., and therefore never benefited from the sorts of programs their U.S. taxes support.

Most accidentals weren't even aware the U.S. considered them to be U.S. citizens until FATCA began to be enforced, at which point banks and other financial institutions, wishing to avoid FATCA's onerous penalties for non-compliance, began having to identify which of their clients were American – a group that includes those who weren't in the U.S. longer than the day or two following their birth, or who were board abroad to at least one American parent.

Also affected by the legislation are "Green Card" (permanent resident card) holders, who are non-U.S. persons who have been "granted authorization to live and work in the U.S. on a permanent basis. "

Some of the first articles highlighting the difficulties that accidental Americans around the world would soon be facing, even though most of them didn't yet know it, began to appear in 2014 in the UK, when the news broke that London's then-mayor (and future prime minister), Boris Johnson, who had been born in New York but left the U.S. at the age of 5, had been hit with a capital gains tax bill by the U.S. IRS for the recent sale of a house in London that he had owned jointly with his (British) wife.

"Johnson has revealed that he is refusing to pay a tax demand issued to him by US authorities – despite previously lambasting the U.S. embassy in London over its failure to pay the [city's] congestion charge," The London-based Guardian newspaper reported on Nov. 20, 2014.

Just two months later, though, as The Financial Times reported at the time, Johnson had "decided to pay the outstanding bill ahead of a [scheduled] visit to Boston, New York and Washington" the following month. (He subsequently renounced his U.S. citizenship in 2016.)

Another early article appeared in March 2015, when the U.S. TV channel, CNN, reported the by-this-time-beginning-to-be-acknowledged problem accidentals were having with a story it headlined "Uncle Sam says my Swedish kid is American."

The CNN piece  begins with an interview of an American woman who had married a Swedish man, had three children with him, and was now living somewhere undisclosed "in Europe" – where she was still apparently coming to terms with the then-still-new, and daunting, financial realities of being an American expat.

She described, as if still in disbelief, the "onerous filing [of tax returns], every single year for the rest of your life," that she was struggling with, and which her young sons would eventually have to deal with as well, in spite of the three boys' "weak ties to the U.S.," having been born in Sweden, but, crucially, to an American parent.

By May 2017, the Association of Accidental Americans in France was beginning to hold gatherings, and in November of that year, the French National Assembly's Finance Committee was announcing that it had assigned Assembly member Marc Le Fur the task of researching the problems facing the country's accidental Americans, including the difficulties many were already experiencing in keeping accounts with French banks, and the fact that "the bilateral FATCA agreement" was in fact not reciprocal.

Le Fur soon became an outspoken advocate of the accidentals' cause, and as reported here in May, 2019, was the co-author of a report arguling that France should "unilaterally [consider] giving up FATCA reporting."

When enforced alongside the U.S. system of citizenship-based taxation, the FATCA regulations mean that an estimated 7 million to 9 million U.S. citizens living outside of the U.S. are unable to avoid paying taxes to both their country of residence and the U.S.

On top of this, in most cases, they're also having to spend what for them will be seen as a significant sum to to tax practitioners (the cost of the tax help typically rises with the complexity of the taxpayer's finances) – in order to ensure not just that their taxes are done correctly, but also to reduce the chances of getting caught out by the often potentially-significant penalties attached to late reporting, or errors in reporting not just of their taxes but also of obscure information reporting obligations as Foreign Bank Account Reports and "Foreign Trust Forms 3520 and 3520A".

Being subject to U.S. taxes also severely limits the investment and retirement options for anyone who lives overseas, accidental Americans and their tax preparers say.

The combined effect that FATCA and the U.S.'s citizenship-based tax regime has had on American expats is starkly evident in the numbers who have been giving up their U.S. citizenships in the eleven years since FATCA came into force. (See table, below.) Before 2010, the number of those renouncing each year was averaging somewhere around 400 to 500, but in 2010, when the U.S. first started charging $250 to renounce, it leapt to 1,534, and in 2013 it roughly doubled that to hit 3,000. Last year (2020 it was a record-breaking 6,705, even though, owing to the Covid lockdowns in place throughout much of the world, new renunciation cases were almost impossible to initiate (which remains the case), so most of these were thought to be cases that dated back a year or more. 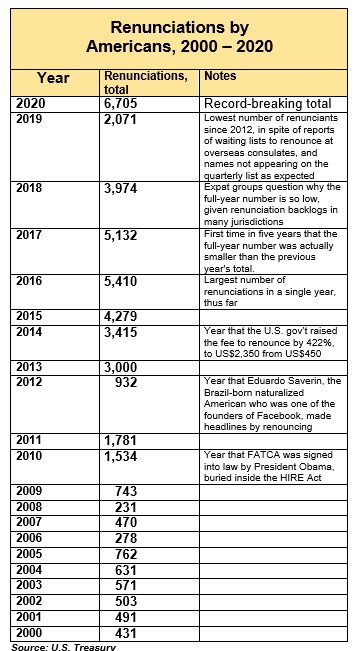