As part of what it calls "a longer-term effort to improve" the services it provides to U.S. taxpayers, the IRS has unveiled "the first-ever Taxpayer Experience Office," and says it "will soon begin taking additional steps to expand" the offering.

News of the IRS's new Taxpayer Experience Office comes as the U.S. agency responsible for collecting taxes from U.S. citizens and companies is heading into what IRS officials admit is going to be its most challenging year ever, in part as a result of the fact that last year was so bad, leaving it with at least 10 million returns still unprocessed as this year's tax season began in January.

Nevertheless, IRS Commissioner Chuck Rettig argued, in an IRS announcement on March 4  that the "formal establishment of this [Taxpayer Experience] office will help unify and expand efforts across the IRS, to improve service to taxpayers," even as the IRS also took such steps as adding more employees to handle the tsunami of returns that are already beginnning to come in. 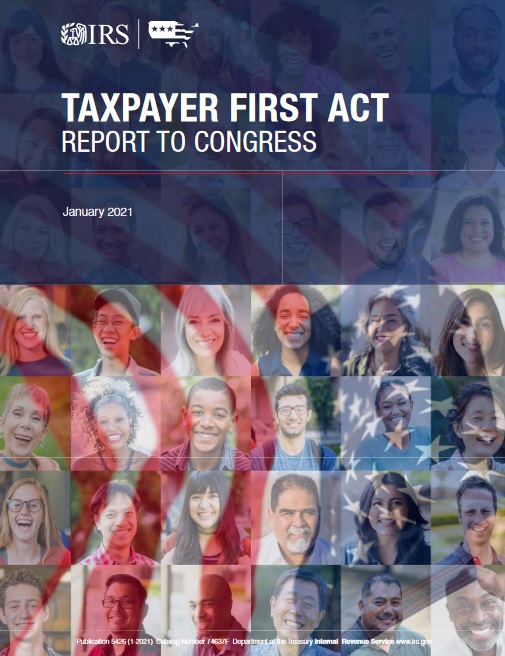 According to the IRS, the Taxpayer Experience Office will "focus on all aspects of taxpayer transactions with the IRS across the service, compliance and other program areas," working in conjunction with all IRS business units in the process, and coordinating closely with the Taxpayer Advocate Service.

As reported, the Taxpayer Advocate Service is an independent organization within the IRS that employs almost 1,700 employees, who actually help U.S. taxpayers to resolve their U.S. tax-reporting problems, rather than merely advising on them, or compiling reports on them..

But the new Taxpayer Experience Office office is part of a larger effort that was outlined in some detail (254 pages) in the so-called Taxpayer First Act Report to Congress (pictured left) last year.

This included input and feedback from taxpayers, tax professionals and the tax community that helped IRS officials to develop their Taxpayer Experience Strategy.

According to the IRS, the Report to Congress identified "over a hundred different programs and tools that would help taxpayers, including a 360-degree view of taxpayer accounts, expanded e-File and payment options, digital signatures, secure two-way messaging and online accounts for businesses and tax professionals."

In addition, to help drive the IRS's strategic direction for improving the taxpayer experience, "the Taxpayer Experience Office has identified key activities [that] the IRS is focusing on over the next five years, including those commitments outlined in the President's Executive Order on Transforming Federal Customer Experience and Service Delivery to Rebuild Trust in Government," the IRS says.

Added Chief Taxpayer Experience Officer Ken Corbin: "The IRS is committed to customer experiences that meet taxpayers where they are, in the moments that matter most in people's lives and in a way that delivers the service that the public expects and deserves."

Corbin also serves as the commissioner of the IRS's Wage and Investment division, which oversees the current filing season and other activities.

The  IRS says its new Taxpayer Experience Office will identify changing taxpayer expectations and industry trends, focus on customer service best practices, and promote "a consistent voice and experience across all taxpayer segments by developing agency-wide taxpayer experience guidelines and expectations," and that it will be adding staff in the coming months to help support the effort.

More in this category: « London-based Withers bolsters its U.S.-Canada cross-border practice in San Francisco Twelve years on: Just how well do you know your FATCA? »