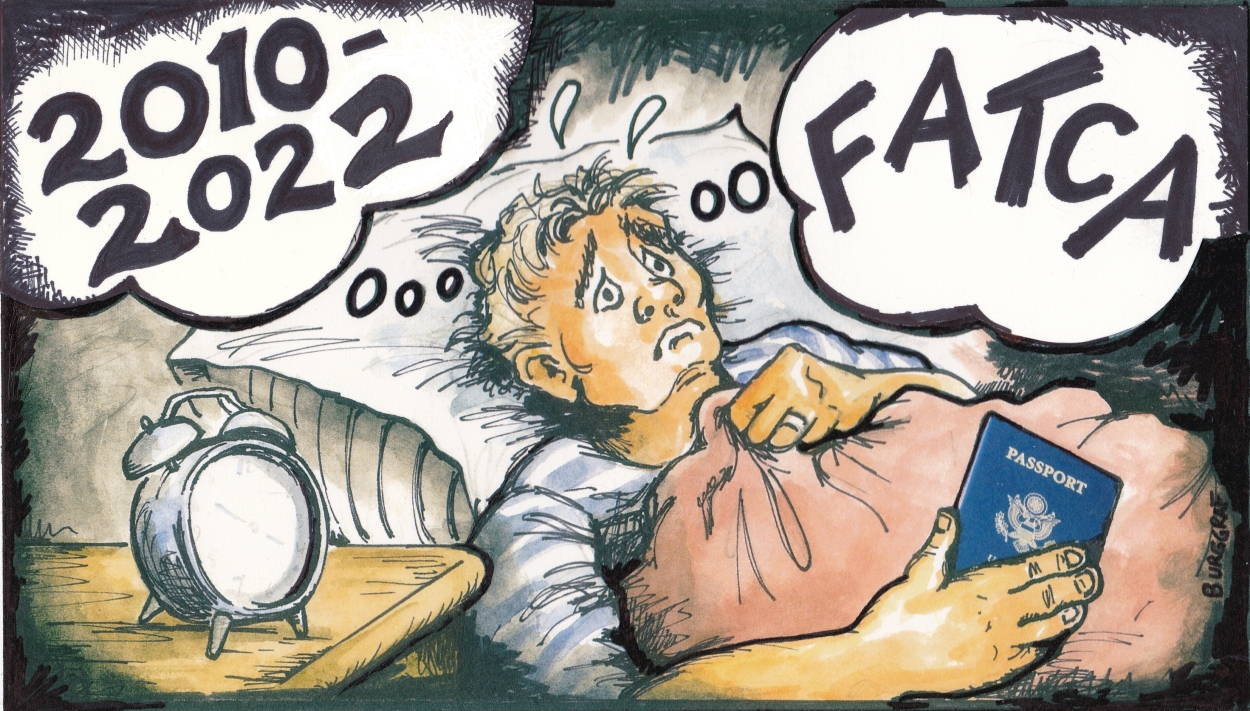 Without really meaning to, many American expatriates as well as tax industry experts, lawyers and others have become experts on the subject of FATCA over the past decade-plus that it's been around.

So, as we did last year on this date, we thought it might be interesting to mark the occasion of FATCA's coming into force by compiling a list of twelve  impossible-to-resist questions about it, in order to test just how well we've all been paying attention! (Spoiler alert: Most of these are from last year, although some of the answers may have changed, and a few are new...) See below...

(Answers on page 2; scroll to the bottom of this page and click the word "Next" in the green box, to the lower right...)

1. Who were FATCA's two original co-sponsors in Congress?

2.  Name at least three countries that have yet to sign FATCA IGAs (Inter-Governmental Agreements) (although they do have "agreements in substance," according to the U.S. Treasury's website)...

3.  Although FATCA is best known for being a reporting requirement affecting banks and other non-U.S. financial institutions, individual U.S. citizens and permanent residents are also expected to comply with FATCA, if their "foreign financial assets" exceed a specific reporting threshold. They do this by filing a specific IRS form with their U.S. income tax return.

Which form is it:

4.  What is the current FATCA threshold amount?

6.  Who said: "More non-residents [Americans abroad] could likely identify FATCA than could likely name the vice-president of the United States"...?

d.) Nina Olson, who retired as National Taxpayer Advocate in 2019 after 18 years in the role

7. What potential penalty does anyone who is found to have failed to file the form mentioned above, in question 3 – who should have filed one – face?

8.  Approximately how many Americans have renounced their U.S. citizenships since FATCA came into force 12 years ago today...

9. In August 2020, one of the original FATCA Model 1 signatory countries announced that it had agreed to a reciprocal IGA agreement with the U.S., which it said would enter into force on Jan. 1, 2021. Which of the following countries was it:

11.  After President Obama signed the Foreign Account Tax Compliance Act into law on this day 12 years ago, FATCA wasn't the only acronym Americans resident overseas soon found themselves adding to their vocabularies. Below are four more. What do they stand for?

12.  After FATCA was signed into law in 2010, member states of the Organisation for Economic Cooperation and Development (OECD), influenced by the same concerns about the use by some of their citizens of foreign financial institutions to evade taxes that led U.S. officials to introduce FATCA, drew up their own program aimed at cracking down on this practice. At first, the OECD's program was referred to jokingly as "GATCA" (as in "Global FATCA"), which was fitting in a way, as it borrowed heavily from FATCA in the way that it was written.

What is this program called, and why aren't the expat citizens of other countries as severely impacted by this law as American expats are by FATCA?

(To see the answers, click on the word "Next" below right...)